The first part of The Hunger Games film series was great and has earned my interest. Things were only beginning for Katniss and the people from all the districts, so I am utterly happy to see what happens next on its second sequel—The Hunger Games: Catching Fire. 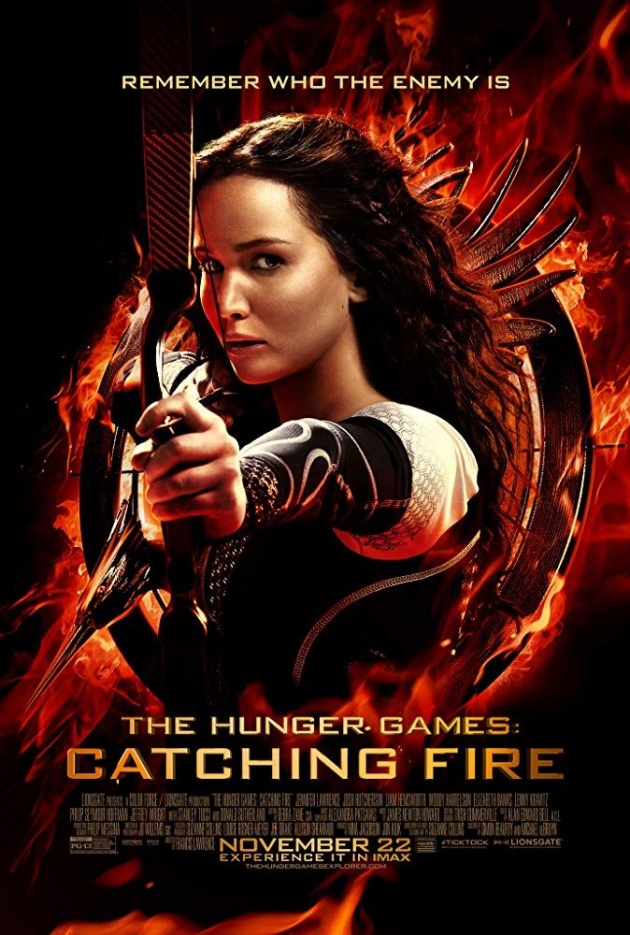 The Hunger Games: Catching Fire is a sci-fi, adventure, action, and mystery film directed by Francis Lawrence, produced by Nina Jacobson and Jon Kilik, and distributed by Lionsgate Films. The film was based from Suzanne Collin's book, Catching Fire, from The Hunger Games trilogy.

Katniss Everdeen and Peeta Mellark returns to District 12 after winning at the 74th Hunger Games. One day, President Snow visited Katniss at the Victors' Village at District 12 and ordered her to persuade people on their Victory Tour that what she did during the game was out of love for Peeta and not an act of defiance against the government as her actions had inspired uprisings. If both of them fail to do Snow's order, District 12 will be destroyed. Katniss then suggested to Peeta to get engaged to make their relationship more convincing. 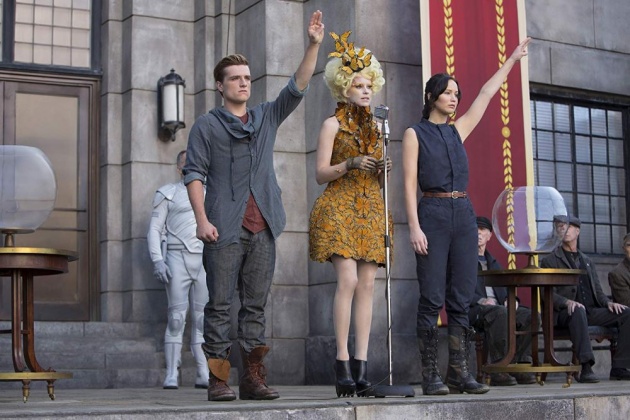 After Katniss, Haymitch, and Peeta saved Gale from torture by the Head Peacekeeper, Snow officially announced the upcoming 75th Hunger Games (Third Quarter Quell) wherein tributes will be picked from the all the previous victors of the Hunger Games.  When the time for reaping came, Katniss was picked as the female tribute while Haymitch as the male tribute to which Peeta protested and volunteered to replace Haymitch. After the crowd did the three finger salute, Katniss and Peeta was dragged out the stage and immediately brought to the train heading to the Capitol. After the tribute parade, they went on to train for the game where they got to know the rest of the tributes from other Districts. Following the suggestion of Haymitch, Katniss have established rapport to some tributes like Beetee and Wiress of District 3 and Mags of District 4.

At the pre-game interview, Katniss wore a wedding gown which turned into a Mockingjay-inspired gown. The crowd was impressed except for President Snow. Peeta then reveals that he and Katniss are expecting a baby, resulting for the crowd to demand the game to be stopped. As the tributes were lined up on the stage, they held each other's hand and raise it, which caused the program to be cut. At the day of the game, Cinna escorted Katniss to the entrance of the arena and was beaten up by the Peacekeepers shortly after Katniss had entered the tube-like elevator.

Katniss and Peeta forms allegiance with District 4's Finnick and Mags and hid into the woods. However, hunting the other tributes was not the primary problem of the game but the natural disasters going on in the arena. They were chased by a poisonous fog wherein Mags sacrificed herself in order for Finnick to help the wounded Peeta. They were then attacked by mandrills while resting after the fog encounter. Later on, they found and form allegiance with Beeta and Wiress of District 3 and Johanna Mason of District 7. After they have analyzed the situation of their surroundings, they were attacked by the remaining tributes who were after to kill them. Beetee then suggested that they electrocute the enemy tributes with the help of the lightning that strikes the tree every 12 hours. When the plan failed, Katniss tied the metal wire around her arrow and shoot it to the sky when the lightning was about to strike the tree, hitting the roof of the arena. This jammed the system and caused a power failure leaving no way for the game makers to see what's going on in the arena.

Katniss then woke up and found herself in the aircraft with Beetee unconscious beside her. Looking around to find other people, she found Haymitch, Finnick, and Plutarch on a room discussing something. Confused of why Plutarch was there, Katniss attacked Haymitch. Plutarch then revealed that she was their mission since the beginning for she is a vital part of the revolution and she is the mockingjay. He also told her that they are on the way to District 13. Katniss was then put to sleep after attacking Haymitch again for not keeping the promise of saving Peeta. She woke up next with Gale beside her and assuring her that her family is safe but also told her that District 12 is already gone. 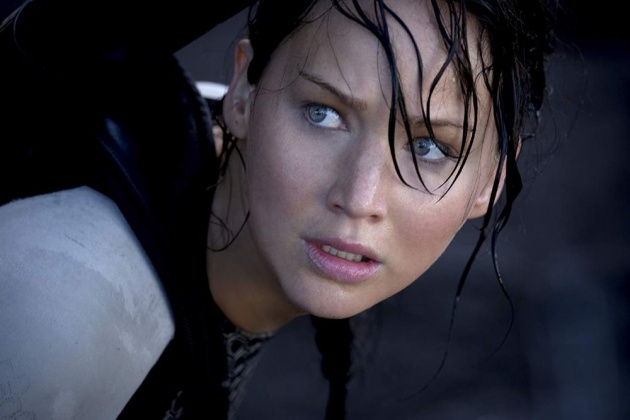 I love the shot at the beginning of the film where Katniss was sitting near the lake showing only her silhouette while the lake was fully seen. It looks fantastic and feels dramatic. The long shots during the tribute parade have never failed to make me feel in awe. I also love the long shots while Katniss was doing a hologram training especially when the lasers appeared and when she finished the training. The way she stood which was captured in the long shot looked very cool and tough. Of course, the close up shot of Katniss’s face at the end of the movie where she was crying then immediately turning into a vengeful look was really a great way to show how things have deeply inflicted her and also gave a hint on what’s going to happen on the next sequel of the film. 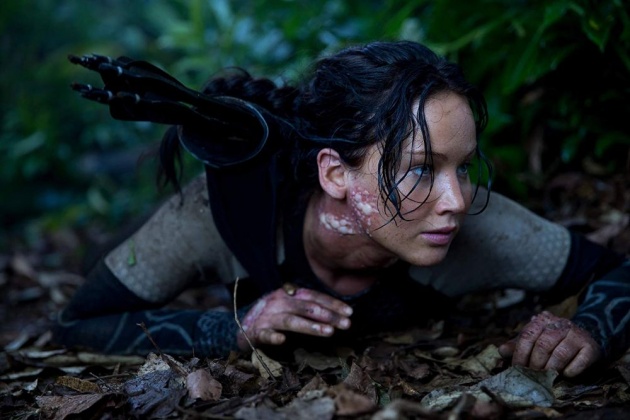 As usual, visual effects and 3D CGI animation on this film were amazing. The flames on their dresses, the lightning and fog at the arena, the televisions, etc. The mandrills and jabberjays were also cool. They look realistic. Meanwhile, the prosthetic makeup for Gale’s wounds from torture and the wounds caused by the poisonous fog to the tributes appeared realistic as well. The wounds brought by the fog looked gross, honestly. Good thing the set up of surroundings was dark. 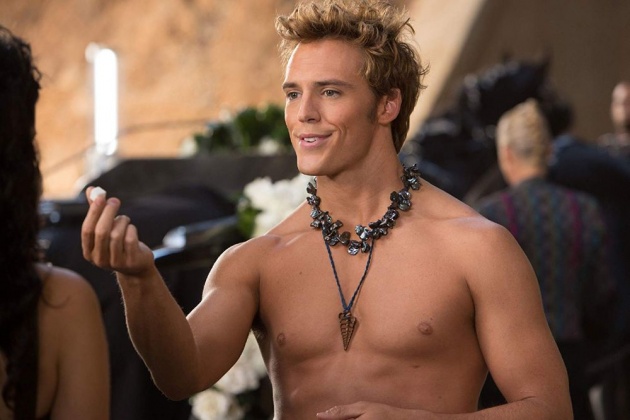 New cast were added to the film and if there would be one among them that I love, it would be Jena Malone as Johanna. I love her voice and facial expressions. I think she did great as Johanna. Of course, the old cast was excellent. Jennifer really rocks Katniss’s character and I still love Elizabeth as Effie. Liam’s acting of suffering from the torture was also very much felt.

(Trivia: Did you know Jennifer’s fee for the first sequel was $500,000? And went up to $10 million on Catching Fire after the huge success of the first movie? Wow!) 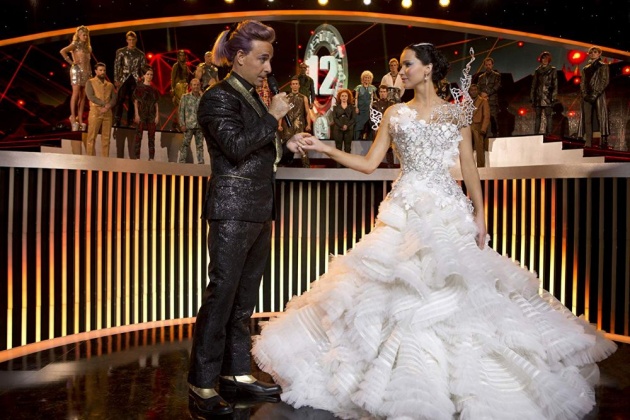 Catching Fire surely made it more extravagant in the costume department. The black costumes of Katniss and Peeta at the tribute parade and most of all the elaborate wedding gown and the black gown with bird’s wings during the pre-game interview. Oh, will I ever forget Effie’s sophisticated dresses? I have lost count of how many dresses did Effie wore in the movie but they all looked beautiful. In addition, hairstyles and makeups of characters for this film were more intricate and gorgeous too.

Just like the first sequel, the second part of The Hunger Games series also have life lessons we can reflect on. 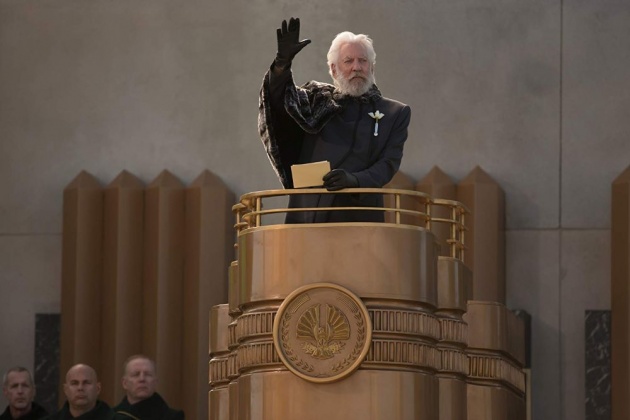 First would be fighting for what is truly right no matter how big the consequences are. People from the districts think that The Hunger Games is a dumb and rude game. Why are lives have to be wasted on a game? Why do they have to kill each other to have a better life? When the districts found hope on Katniss, they knew it was time for a revolution. However, this also means war and great chaos. It’s a sad reality that peace, most of the time, is achieved and the result of war. 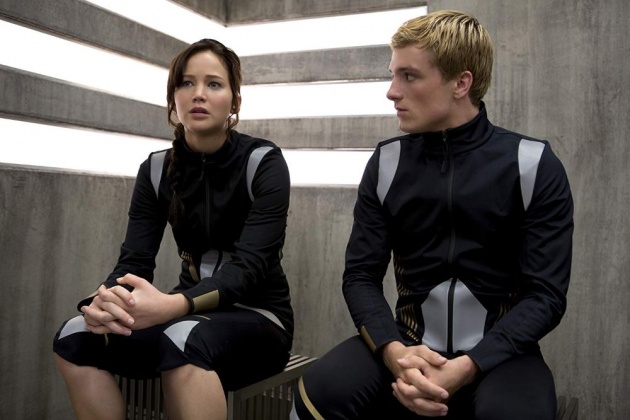 Second, is breaking the system. Katniss and Peeta have done it already on the first sequel by attempting to commit suicide together if one of them has to be killed. On this film, she destroyed the game by shutting it off. Her defiance to the rules suggests that you should not conform to something you feel is not right.

Third, is creating allegiance to survive. Katniss formed allegiance with tributes from District 3, 4, and 7. Each of them contributed in figuring out the phenomenon in the arena. Their teamwork increased their chance of surviving too. Just like in real life, we need to have our group, like family or friends, to face the challenges of life easier. Indeed, there is power in numbers. 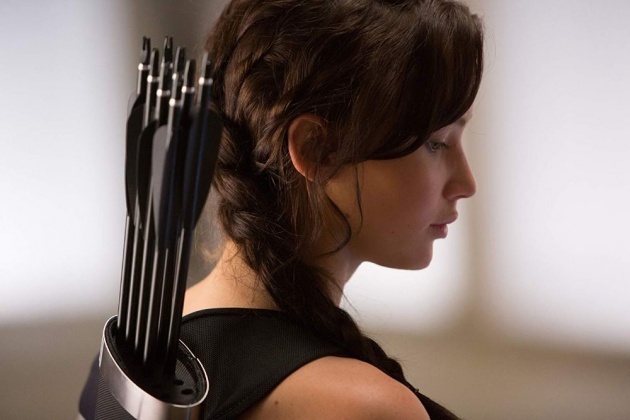 Fourth, is that females can be great leaders too. Although Katniss haven’t realize it yet, her actions from the 75th Hunger Games have certainly sparked hope to the people from the districts. She was the key and hero the people have been waiting for to start the revolution. She is the mockingjay. Katniss is a reflection of how women can be strong and also lead something which most people think only men can do.

The second sequel, Catching Fire, was definitely great to watch. It has good and really unexpected twists of events. (I just wish they didn’t kill Cinna?) I certainly love this film and I can’t wait to find out what happens next. Let the flames begin!