The making of 'EARTH' (part one)

In summer 2011 I decided to take my model making ability further than just still illustrations, I decided to make them come alive! So for my major in my final year of Uni I have decided to make a stop motion animation. I spent a lot of time over the summer tutoring myself, making small stop motion projects, watching endless youtube tutorials, and also spending a lot of time watching 'trap door' and the 'Gogs' (BRILLIANT animations, a must see!)  This was to push my ability and make myself confident in my self initiated project.

I wrote the script myself, its based on a dream I had a few years ago which fortunately I have never forgot....I do have a major soft spot for the unknown...you can always find me in the Sci-Fi section in blockbuster :p so it is no wonder I have such awesome dreams!

An alien (Minus) crash lands on earth, he meets a stray dog called Zero. They explore various typical aspects of our everyday city streets, creating funny, original scenarios. The basis of the sript comes down to the alien and the dog developing an inseparable bond. Keeping a quirky, humorous touch throughout.

The beginning, obviously had to be the spaceship floating through the sky in a strange manner, ready to crash land. So I decided to use some tin foil scrunched up to make it look like some kind of machine, but NOT your stereo typical spaceship (the dish etc). I had to compromise with the camera position on this one. I needed a birds eye view of the set, but I couldn't quite hold the camera still in the air at the same time as moving my little piece of foil. So after pacing around for a while and a few brews later I came up with a RIG idea! A large graffiti book, an office chair, and the camera strap. PERFECT! :) 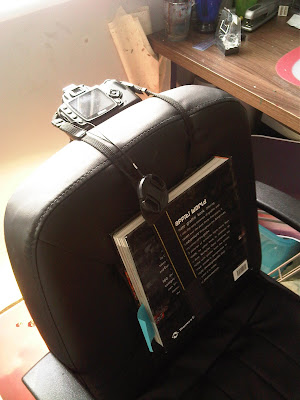 Next came the actual ship, and to be honest I worked really hard on making this not so typical... and its probably still a little typical! but it makes cool sounds so there! ;) Lots of cello-tape, foil, spray paint....four ships later BANG the minus machine :D.... 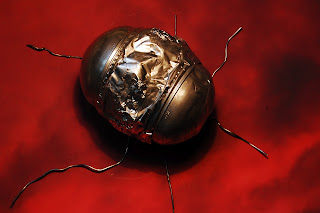 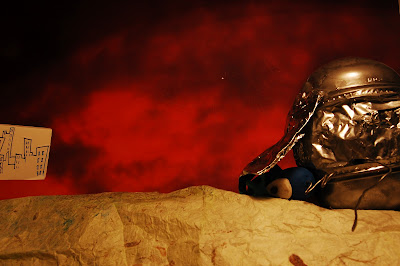 I have named my bird character Add, purely for the fact that he is an additional character, and is not on the original script. I created Add because I wanted to show the innocence of the earth at this stage (just before the ship crash lands). He is a naive little character plodding about minding his own, when suddenly all hell brakes loose! A funny, yet realistic scene. 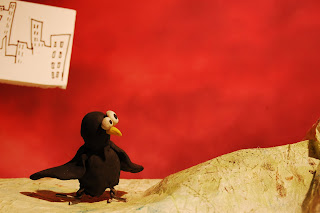 After being spat out of his own ship Sid/Minus, rolls down the hill, bangs his head off a street sign and lays k.o'd on the ground.  Zero spots him, begins to have a nosey sniff around. A large Lick on the cheek wakes the alien up! (this sounds a little like sleeping beauty I have just realised, ha). Zero entices the alien to follow him to the city, a tour of a stray dogs world if you like. 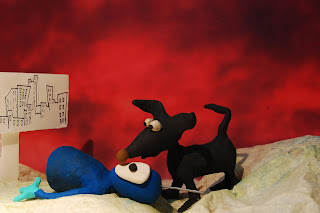 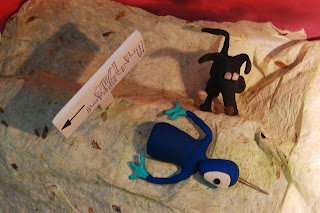 I didn't want to add too much detail to the city, as I didn't want the surroundings to overcome the characters, yet it still had to be effective and easily recognisable as a city. Two large A2 boards were created for the distant city background. Then I made 3D walls/windows, for the foreground.  All this was using card, marker pens, and bits of ripped brown paper. 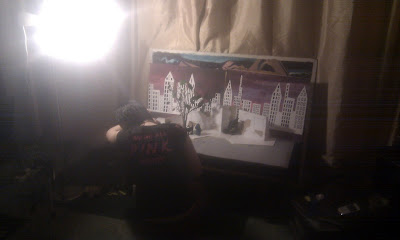 The curb was made using foam board, and believe it or not a sprinkling of pepper over the surface to create a slightly rustic side walk effect. Painted on yellow road markings with acrylic, then added  pencil markings for the outlines and drain. 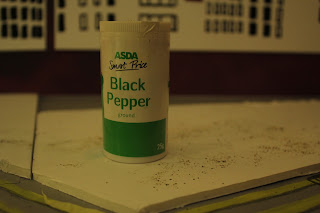 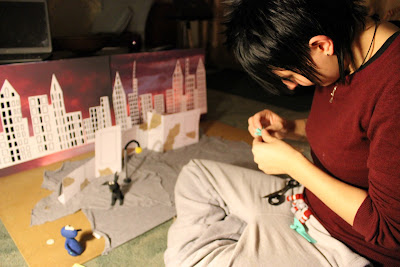 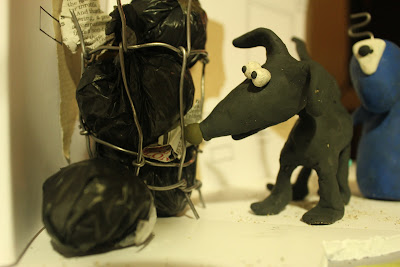 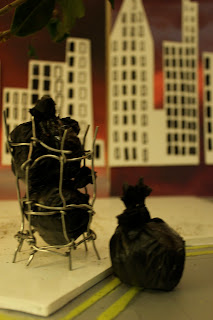 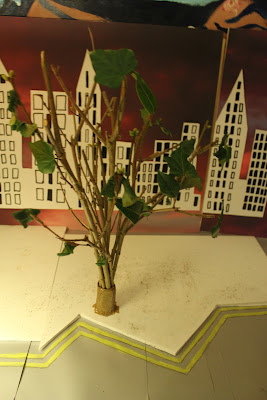 One of my favourite bits! I created a typical street bin, using solder wire, then made small bin bags using material then wrapped them in small pieces a black bin bag. Worked really well! Another prop was the tree, made from real twigs and leaves, bit of tape at the bottom for support. The bag was made out of a piece of plastic bag,  I cut out the handles, and folded the bag neatly to make it partially hollow. I also placed our additional friend 'Add' in the city sky, flying by. These small props add a sense of reality to the overall animation, things in everyday life that we tend to take advantage of (Yes we take advantage of carrier bags!) ha...I just feel that a city is at its best in its peek of 'grit' and thats what I have tried to achieve so far.