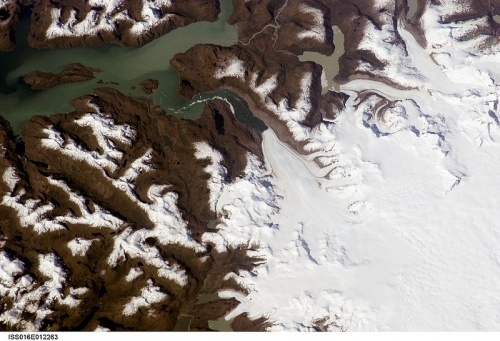 Could it be that criminal gangs are becoming a threat to the world’s glaciers as well as climate change? In Chile police are currently investigating the theft of some 5,000 kilograms of millennia-old ice from the Jorge Montt glacier - the 454-square-kilometer glacier which is melting at a rate of a kilometer per year making it one of the world’s most iconic symbols of global warming. The Report comes from the UN’s International Strategy for Disaster Reduction (UNISDR) Mining for Ice: Mining for ice could pose a major additional threat to the glacier which is situated in the Bernardo O’Higgins National Park and is part of the 13,000 square kilometer Southern Patagonian Ice Field, the third largest frozen land mass after Antarctica and Greenland. It is the 3rd largest frozen land mass in the world after Antarctica and Greenland, according to the UN International Strategy for Disaster Risk Reduction (UNISDR). “The authorities in Chile are to be congratulated on clamping down on this illegal activity,” according to Margareta Wahlström, the Secretary-General’s Special Representative for Disaster Risk Reduction and head of UNISDR. “The Jorge Montt glacier and other major ice-fields are a precious part of our common world heritage and important yardsticks by which we can measure how man-made global warming is threatening the world’s water supply and damaging the environment. They deserve all the protection we can give them, including safeguarding from this type of vandalism.” Never Imagined Theft as Threat to Glaciers? When in 2005 agreement was reached by by168 states on an international blueprint for disaster risk reduction, there was no reference in the Hyogo Framework for Action to the environmental threat posed to the world’s retreating glaciers by criminal gangs. Chile’s Centre for Scientific Studies (CECS) has said that several of the country’s glaciers are shrinking because of global warming but the much-studied Jorge Montt is one of those shrinking the fastest. Documented History of Glacier Retreat: A NASA study in 2000 found: “Conventional topographic data from the 1970s and the 1990s were compared with data from NASA’s February 2000 Shuttle Radar Topography Mission to measure changes in the volumes of the 63 largest glaciers in the region over time. The researchers concluded the thinning rate of the Patagonia icefields more than doubled during the period from 1995 through 2000 versus the period from 1975 to 2000.” In December 2011, glaciologist and CECS researcher, Andrés Rivera, published a new study through a series of 1,445 time lapse photos between February 2010 and January 2011 which showed that the glacier had retreated by a kilometre during that time. He was quoted as saying that global warming is a factor and that the glacier is melting especially quickly because it partly rests in the waters of a deep fjord. ” See Film Report – “WMO Red Hot Global Record Temperatures” - diplomaticallyincorrect.org/films/movie/red-hotglobal-record-temperatures/24139 What is Stolen Glacier Valued? The initial assessment of the street value of the 5,000 kilos of ice - 3 million Chilean pesos or US$6,160. Read Full UNISDR Report (by Dennis McClean) - www.unisdr.org/archive/24966 Ambassador Muhamed Sacirbey - FOLLOW mo @MuhamedSacirbey Facebook-Become a Fan at “Diplomatically Incorrect”       Twitter – Follow us at DiplomaticallyX    Photo - Credit NASA (UNISDR)