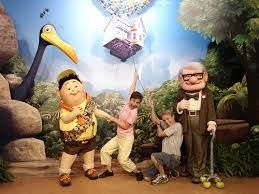 "Up," the latest lovely fantasy from the artists at Disney's Pixar animation, it's a truly fantastic adventure -- a lighter-than-air daydream about a cranky widower (the voice of Ed Asner), a chubby boy and their amazing journey.

And heroes they become once they land in South America and find themselves facing an unexpected challenge from the past.
"Up" has a delightful prologue, set in the '30s, and the sort of slam-bang chase scene at the end that used to mark the "Wallace and Gromit" stories. It's a delight pretty much throughout.

What's true genius, though, is a sequence about five minutes in, where Carl and Ellie -- the kids at the very beginning of the film -- grow up, get married and grow old. It's pure, visual filmmaking, without a word spoken -- just the haunting music of Michael Giacchino -- and it'll be talked about the way the first half-hour of "WALL-E" was discussed.

The rest of this movie isn't quite at that perfect peak, but it's still great fun and inventive animation. Unlike most cartoons, which go for cutesy caricature, this one is practically a geometry lesson; ornery old man Carl is all squares and rectangles, pesky pudgy Russell a rolling mass of circles and ovals.

The story -- from co-director Bob Peterson, who also wrote "Finding Nemo" -- has the elegant simplicity of a children's picture book, too. Forced to leave his house, a lonely retiree decides simply to take it with him. So, after tying thousands of balloons to it, he flies off to Peru -- not realizing, unfortunately, that he has an 8-year-old stowaway on board, intent on earning his Wilderness Explorer badge.

Ed Asner provides Carl's voice and young Jordan Nagai does Russell's, and they're both effortlessly believable. Delightfully different, too. I mean, just look at them. A grumpy old man and a chunky Asian-American kid -- these are not a big studio's typical heroes 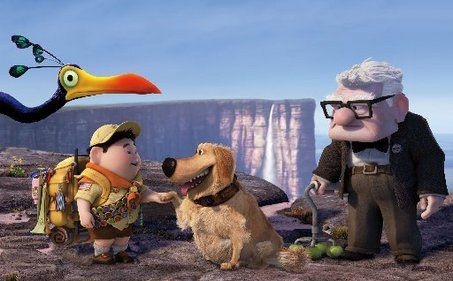 It's here, perhaps, that the movie goes a little too far. A film that features a Victorian house sailing through the sky is magical enough -- adding an army of talking dogs is pushing things (never mind having those dogs then fly around in ancient biplanes).

But there are plenty of bright silly things here, like a giant squawking bird that Russell soon takes, well, under his wing. And at least when the dogs do speak (courtesy of some sci-fi collars that translate their barks) they say all the stupid things you know your pet would (mostly excited chatter about squirrels, treats and tennis balls). 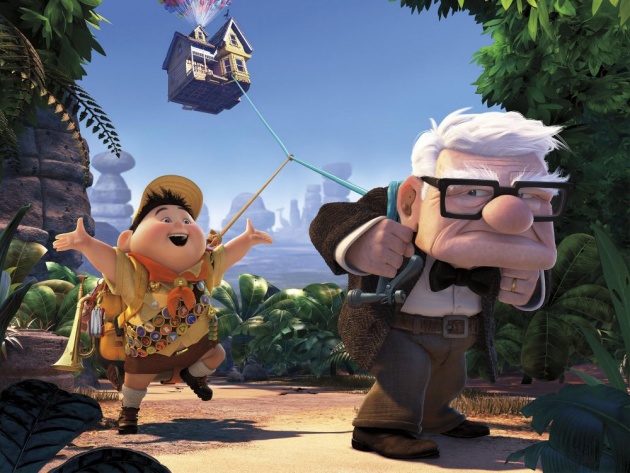 None of these later scenes quite matches the grown-up artistry of that early, wordless sequence. But by the time the film reaches its final, breakneck chases, there's nothing to do but surrender happily to the excitement -- and cheer our unlikely heroes on.

And I don't just mean that cranky senior citizen and his misfit friend. I mean the heroic band of animators who have spent the last 15 years or so -- with "Toy Story," with "The Incredibles," with "WALL-E" -- giving us back the giddy, guiltless joy of cartoons.