From the previous post, I described the texturing and shading process of Uyir. In this post, I'll detail the hair and beard creation as well as the facial expressions.

The beard was pretty much straightforward. I painted areas where I wanted his beard to grow and defined tiny hair strands for this using Blender's powerful particle system. The eyelash and eyebrows were also created this way. The particle system allows you to comb, smooth, puff, cut, and add hair wherever you choose. I combed the eyebrows and eyelashes in a way that would go for the stylistic look I was aiming for.

To create the hair, I similarly painted areas I wanted the hair to grow, and then spent hours combing the hair based on the concept art I had of him. To create realistic hair, it was important to use a LOT of hair particles. In my previous films "Vetri" and "Tripping", the hair was faked. The hair was simply a series of square meshes with a hair transparent png applied to it. This was not realistic. "Theevan" didn't have any hair at all (except for one of the characters but I did suffer memory and CPU issues because of her hair :/). In this film, I wanted to give a more realistic looking hair and this required using plenty of hair strands since in reality, we have so many hair strands that it would nearly be impossible to count them individually. But I also needed to figure out how to save memory and not have my computer crashing everytime I attempt to render hair. After doing some research, I found that many CG artists use a technique called 'instancing' that enables millions of hair particles to be generated when rendered but only using memory of a few hair particles. This is a HUGE time saver and doesn't place too much stress on your PC. Instancing is usually perfect to create a crowd of millions, a massive forest with millions of trees, a huge army, a swarm of bees, etc without having to manually having to add them in yourself.

This was perfect for my scenario, since I don't have the fastest and strongest PC in the world. I could render realistic hair with an average PC and with free software. Using only a few hair strands, I then used the instancing feature (called "children" particles in Blender) which generates for instance 100 hair strands around the original hair strand. When I comb a hair strand, the 100 strands linked to it follow along and hence I don't have to worry about combing each hair particle individually and thus saves a lot of time. Here is the result of my combing and instancing of the hair, eyebrows, eyelashes and beard: 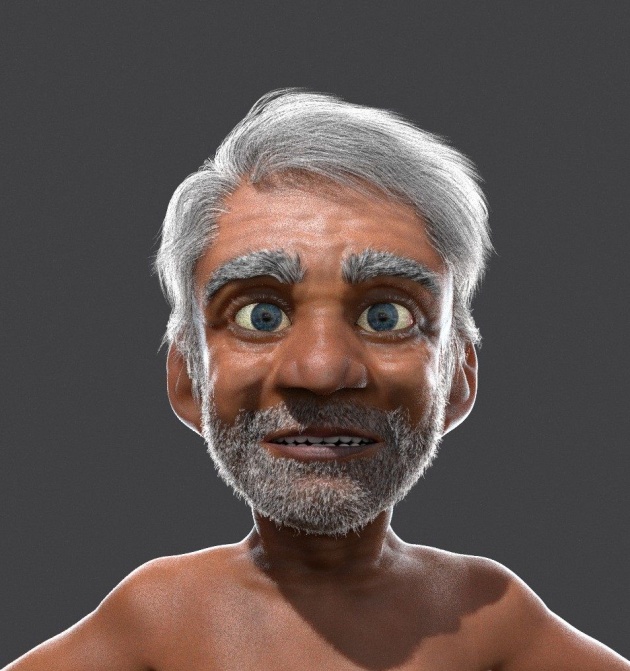 The final step required to bring the character to life was give him facial expression. The film doesn't have dialogues so I do heavily rely on facial performance. Thus, this was important to get right. Usually, an animator would go in and create phonemes which are like visual representations our mouth makes when pronouncing certain letters. Luckily, I could skip pass this since it won't apply in this film. To create facial expressions, I defined a series of shape keys. These shape keys would then have drivers which are controlled by bones to make the animators life easier. The first series of shape keys I made were for the jaw. This included creating the jaw rotations, jaw left, jaw right, and jaw jutt. I then created the lip movements. This include mouth open, mouth close, mouth oo, mouth aah, etc. I would create all possible shape keys for the nose, eyes, eyebrows and cheeks. Once I was happy with it, I created bones that will drive the shape keys. This process was a little tedious (not hard, but tedious) and took some time.

Here are some facial expression tests I did: 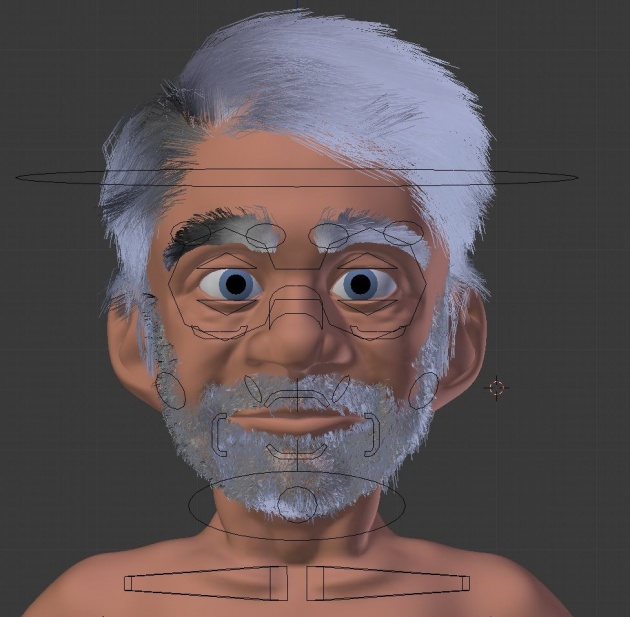 And here are some renders with facial expressions: 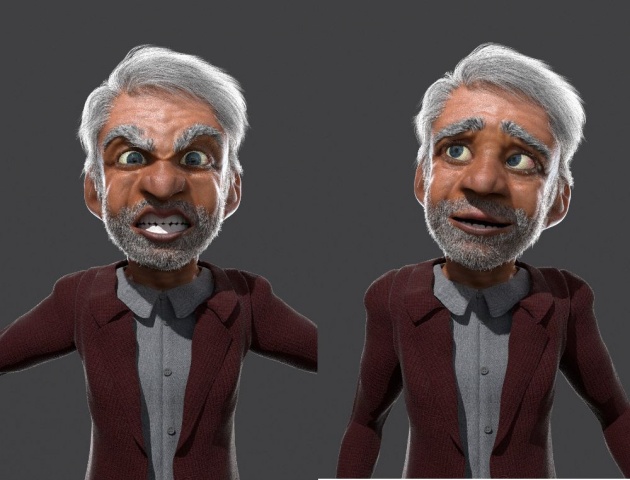 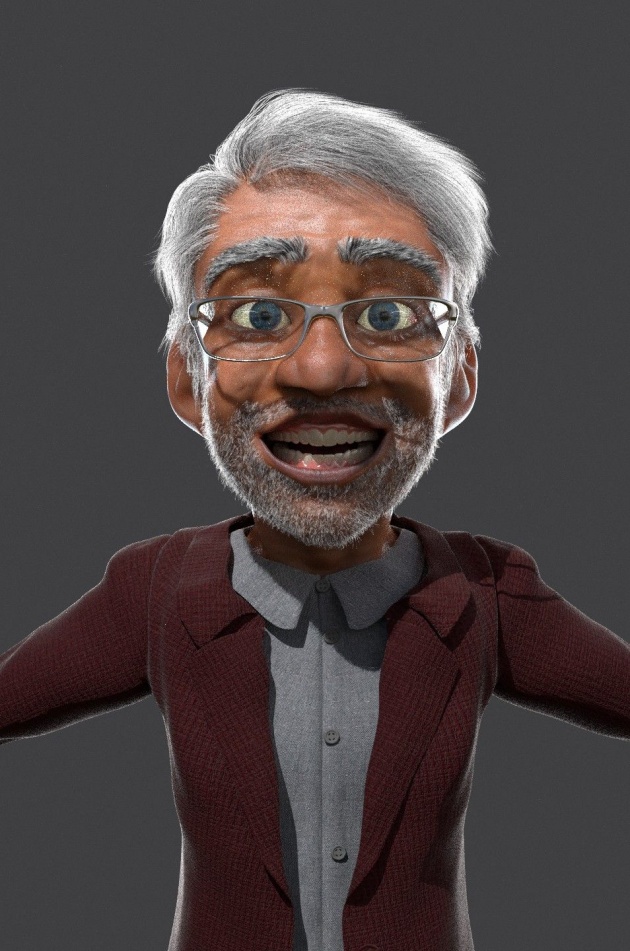 He seems expressive enough. This should work for the film I think. If I need more expression, I'll have to go in and create some more at that stage, but for now it seems good enough.

As a final polish to finish off the character, I've given him glasses and a walking stick. I guess I'll call him done! 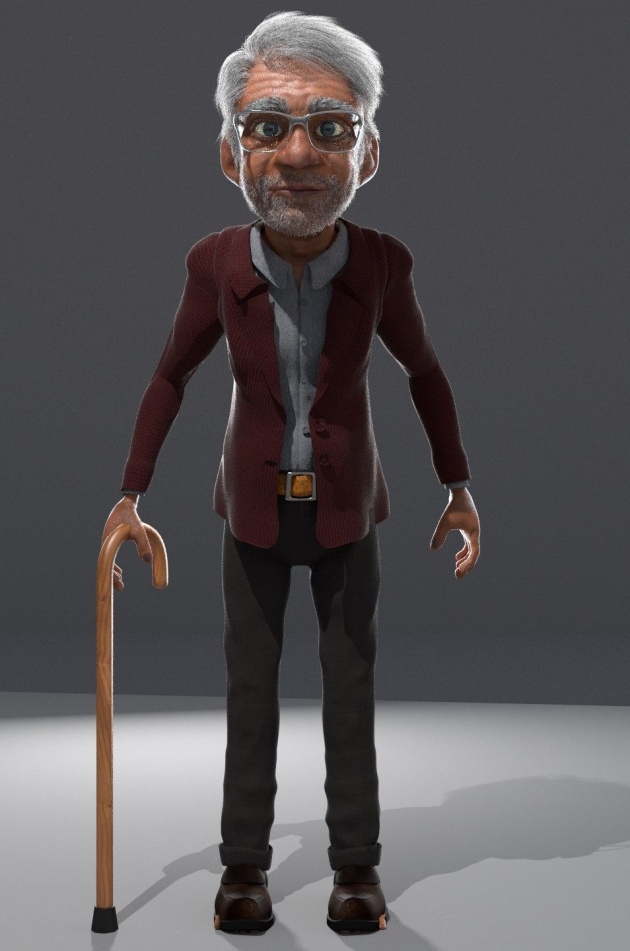 In the next post, I'll detail how I converted the old man into the granddaughter.