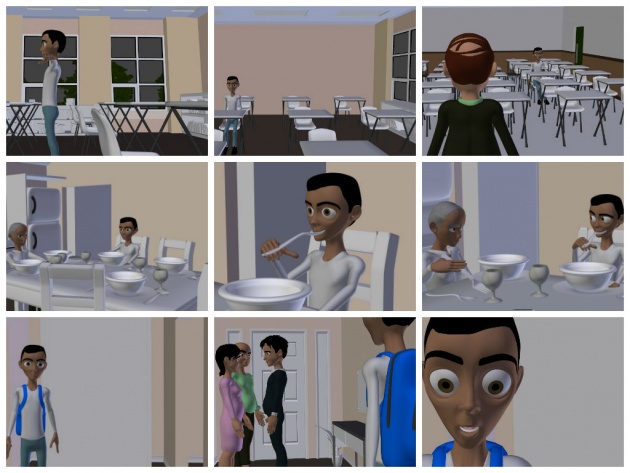 Been very busy the last few weeks. The (almost) final animatic for the film is now complete. Now I can finally start the Production phase. The exact duration for the film will be 10 minutes and 12 seconds. I will need to render 14703 frames. About 3 weeks of work went into making the animatic. Overall, the story and flow of the film has come out well.

Most of the time was spent finding the audio tracks and sound effects that will work with the film. The most difficult part for me was how to make that smooth transition between scenes. Many times it would be abrupt. Another was getting the timing of the shots right. I had to imagine the shots coming to life in my head and adjust the timing to suit.

Now to detail how I went about making the animatic. First, I would have my story/screenplay file open in a separate window. I would then open a new Blender file, link in the required set as per the screenplay and also link in the required characters for the scene. I would then save the file with a name that is easy to remember later on (e.g, 'ch1sh2' to represent the second shot of the first scene). I would then give the characters a very basic pose representing somewhat the actions in the screenplay. The pose has to look somewhat believable just to add a bit more clarity to the final rendered animatic.

A number of cameras would then be added, staged and adjusted for the final animation and snapshots of the Blender viewport would be taken. Each shot will be saved as a JPEG image called something like sh1.jpg, sh2.jpg, sh3.jpg,...

Here is the file structure I used:

In the third week, I simply assembled all the snapshot images into Blender, added all the audio tracks and sound effects and timed all the elements to look like the final film.

This is also going to make the production phase a lot easier (and hopefully faster) since:
1) I better know the required timing of the shots and don't have to guess whether I am going over/under.
2) Each of the Blender files containing the scene and characters for each scene can simply be re-used in the production phase and no time will be wasted having to link in characters and scenes one by one. Instead, I can just focus on character animation.

Here is a snapshot of all the elements used in the animatic creation: 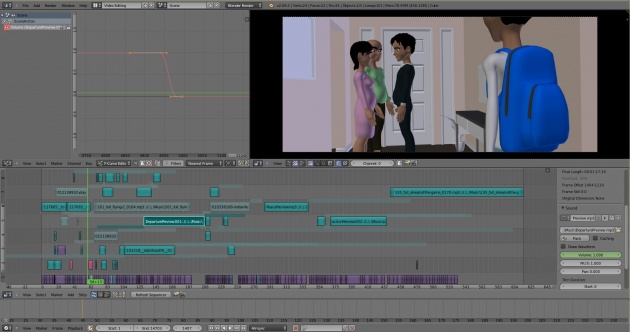 I can't show the audio unfortunately as I haven't paid for the licence yet. I just downloaded the preview audio and used it in the animatic to test out how it will be. I would do this on a number of different soundtracks to test how it would sound before making a purchase.

Next, I will start the Animation phase where I will go through and animate each of the shots as per the animatic. From time to time, I'll also post some promo videos and a trailer...