Costa Rica -- a country of nearly 4.9 million -- people ran on nothing but renewable power for 75 days, a goal that many richer countries can only dream of.
So how did they do it? 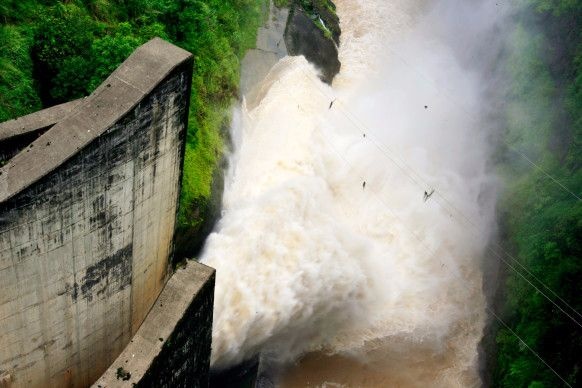 COSTA RICA’S ENERGY utility hasn’t burned any fossil fuel this year. None. The country of nearly 4.9 million people ran on nothing but renewable power for 75 days, a goal that many richer countries—including and especially the United States—can only dream of. So how did Costa Rica do it? Smart infrastructure investments and an assist from an unlikely ally: climate change.

Like Paraguay, Colombia, Brazil, and many other Latin American countries, Costa Rica gets most of its energy—about 80 percent—from hydroelectric plants. Damming rivers has environmental consequences too, obviously, but the energy from the resulting power plants is carbon-free. Hydropower is also more reliable and easier to scale up than existing wind and solar technologies.

So in that sense, Costa Rica’s 75-day streak may be impressive, but it isn’t surprising, says Juan Roberto Paredes, a renewable energy expert at the Inter-American Development Bank. On average, the country’s energy matrix was already nearly 90 percent renewable, making it the second most “renewable country” in Latin America (after Paraguay, which gets nearly all of its energy from just one dam).

But a reliance on hydropower still puts you at the mercy of the elements—just different ones than solar or wind. The key to hydropower is rainfall. Less rain means less water behind the dams, which quickly translates into less power. Just last year, Costa Ricadeclared a state of emergency in the country’s northwest because of an El Niño-fueled drought, and hydro’s contribution to the country’s electric grid dropped, forcing the utility to switch on some diesel generators. (Brazil is currently experiencing a similar crisis, with a catastrophic drought endangering many of the hydroelectric plants that power São Paulo and the rest of the country’s populous southeast.) But this year, Costa Rica’s four largest hydropower plants have enjoyed unusually heavy rains—so far.

Here’s where climate change comes in. Almost all climate models predict that “one effect of climate change will be a concentration of rainfall, and as a consequence of that, longer periods of drought,” explains Walter Vergara, a climate change specialist focused on Latin America at the World Resources Institute. Especially in tropical countries like Costa Rica, more rain will fall in less time. That’s great for hydroelectric plants, but terrible if you worry about, say, flash floods and mudslides. Plus, rainfall now might just mean drought later. Costa Rica’s rainy winter won’t last, and comparable levels of precipitation might not return for a long time. “Only El Niño and La Niña can tell us how much longer we won’t need fossil fuels to generate electricity,” says Julio Mata, an energy expert at the University of Costa Rica.

So does that mean that once the rain passes, Costa Rica will be breaking out the diesel generators once again? Not necessarily, Vergara says. The country has another natural energy source standing by: volcanoes—six active ones and dozens more inactive, which means subterranean heat and power. Geothermal now contributes about 15 percent of Costa Rica’s energy, and its share of the pie will likely only grow as the government makes further investments.

That’s an exceptionally reliable source of power, subject to none of the fluctuations due to changes in rainfall, sunlight, or oil prices that plague other methods. Geothermal offers Costa Rica a way to fill in hydropower’s gaps with another renewable source, rather than turning to fossil fuels in the next emergency. Mata says the country could eke out even more power if it allowed geothermal plants in national parks and protected areas, which cover a quarter of Costa Rica’s land and include many of its volcanoes.

Of course, not every country has rivers to dam, volcanoes to tap, or a government with such a strong commitment to environmentalism. (In Costa Rica, the energy and environmental ministries are even under the same roof, Paredes told me.) In many ways, Costa Rica had a significant head start in the race toward a future free of fossil fuels. But they are showing the rest of us what it would take to catch up.