Wazir trailer: Amitabh, Farhan are as mysterious and intriguing as a game of chess 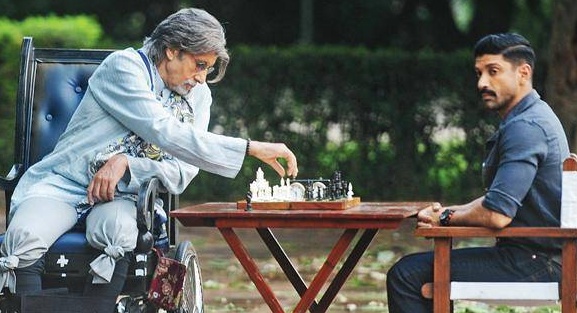 The trailer for Bejoy Nambiar's upcoming film Wazir was released on Wednesday, and it stars Amitabh Bachchan, Farhan Akhtar and Aditi Rao Hydari, among others. Produced by the biggies, Vidhu Vinod Chopra and Rajkumar Hirani, Wazir's trailer sets one thing straight. This is going to be a gripping film, possibly a political thriller too since the trailer hints at several mind games to keep you intrigued.
The first look of the film was released with Aamir Khan's PK last year in December, and since then, we've been waiting for an extended trailer of the film. The trailer starts off slow, with a Neil Nitin Mukesh playfully voicing the tongue-twister in a villainous manner,Lakdi ki kaati.. kaati pe ghoda..

Wazir is an upcoming 2016 Indian action thriller film directed by Bejoy Nambiar. The film is written by Abhijat Joshi and Vidhu Vinod Chopra, and is jointly produced by Chopra and Rajkumar Hirani. It stars Amitabh Bachchan & Farhan Akhtar in lead roles along with Aditi Rao Hydari, John Abraham Neil Nitin Mukesh and Manav Kaul in supporting roles. It is scheduled to release on 8 January 2016.

We then see snappy visuals of what the film has to offer: Farhan's serious mode coupled with a moustache and ripped biceps, there's action, there's a background score that would give Hans Zimmer a run for his money, and Aditi Rao Hydari's svelte presence that promises a back story.
And there's also Amitabh Bachchan towering presence that immediately grabs your attention. Also, don't miss John Abraham's cameo. Eye candy apart, every character in the trailer seems to be on some mission and you are drawn into the drama.
Amitabh Bachchan is in a wheelchair, presumably a Stephen Hawking type character who is a mastermind, Farhan's a cop who is predictably facing several road blocks in his way. Thrown in are some masterful chess moves, and we're intrigued.
Bejoy Nambiar has definitely set a standard for himself with films like Shaitan and Pizza, and with names like Bachchan, Vidhu Vinod Chopra and Rajkumar Hirani, you can definitely keep your expectations high from Wazir.
Watch the trailer here:

The idea of Wazir came to Vidhu Vinod Chopra after badminton player Syed Modi was shot dead on 28 July, 1988 in Lucknow. However, Chopra claims that this film is completely different from the incident.When Chopra met his writer Abhijat Joshi in 1994, he told him about the idea of setting a thriller around two chess players The title of the film had gone through several changes including Fifth Move, 64 Squares and Chess being some of them. Later, between 2000 to 2004, they both wrote it in english. It was supposed to be Chopra's first Hollywood film, with Dustin Hoffman playing the protagonist. In 2005, their producer Robert Newmyer suddenly passed away. The script of Wazir took five years to complete.Then Chopra saw the black-and-white portions of Bejoy Nambiar's David (2013), which he liked. Later Chopra recalls: "I called him (Bejoy), and I have an almirah (Cupboard) full of scripts, so I opened it and asked him ‘Which one? He picked this one. Then we worked for two more years on it.
The working title of the film was Do, which was changed to Wazir in October 2014. Both Chopra and Joshi consulted chess experts from America for the film The cinematography of Wazir is done by Sanu Varghese, who had previously worked with Nambiar in 2013's David.The films story was tweaked constantly during its seven-month editing period. This is the first film edited by Chopra after his directorial venture Parinda (1989).[8] Joshi, who is also first time editor of this film, believed that "a film is rewritten on the editing table." Visual effects were used to hide Bachchan's leg, and to make him look disabled. He weared black socks with marks on them to enhance CGI in it. The wheelchair on which he sits throughout the film was chosen among 40 to 50 wheelchairs.