Afghanistan, It's Their Country 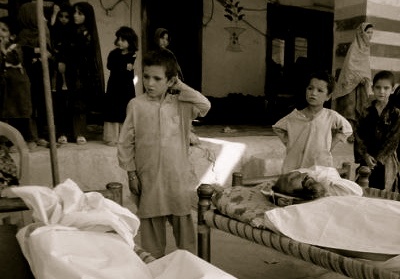 Murder of at least 9 children and as many Afghani civilians by a US soldier gone mad, brings back one question: in their country what is rationalization for US military presence after 10 years. When an Afghani kills a US soldier unprovoked or otherwise, it is not the same political/diplomatic issue as the other way around – we as outsiders can leave. Afghanis have no option but to stay. After 9/11, US could try justify bombing/invasion on basis of self-defense or at least that Osama Bin-Laden and his Al-Qaeda had sanctuary in Afghanistan. Ten years later such justification is gone and new rationalization may be valid but countered by real life events as Koran burnings, drone strikes gone bad and US and Afghan persons acting individually to undermine through murder, insults and other provocative/inhuman acts. The US soldier who today murdered the 16 or more civilians has probably already set into motion the “revenge” killings of Americans – probably fellow soldiers. The Taliban regardless will exploit the moment to show the US as now both inhuman and invader – an effective tool to polarize and perhaps recruit new sympathizers, soldiers and/or suicide bombers. Vicious Cycle is a term that probably has few better real life examples than Afghanistan today. The opportunity for US to accomplish positives through military means has evaporated like an intense shower on hot concrete – it can rain bombs and bullets but impact will be gone soon, except perhaps for anger at “collateral damage.” Does the US have options? Yes, but it is much less in the bullets and bombs. I was impressed by how much US Commander in Afghanistan General Allen was trying to speak like diplomat respectful of Afghanistan and people. Similarly, it has been a marked indication of the “Vietnamization” of Afghanistan that US soldiers returning from war are not certain about the purpose/goals of military missions. The US servicemen who came back most confident of their own future and America’s role have transformed vision of their and US role into one more like diplomacy and peacekeeping. See more Veteran Blogs which truly impress with perception and at times almost disconcerting openness: www.filmannex.com/search/tag/veterans%20blogs Unfortunately though the uniform speaks enemy to too many Afghanis with every incident of “Collateral damage” or “religious/cultural insult” or of plain murder as just occurred. (We may never find out if the US soldier who murdered 16 had become inspired/brainwashed by talk of religious war coming from “Christian Taliban” – simply snapped is not a credible explanation even if most convenient). What can America do now in Afghanistan? I’m concerned about outcome of US-Afghan relationships. Even more disconcerting is the resurgence of repressive policies toward women and more open society. The best that the US probably can do now is support local Afghan efforts at education, strengthening the free marketplace of ideas and empowerment of progressive minds/persons. See Afghanistan Internet Projects at www.filmannexcorp.com/film-annex-in-afghanistan Best we can do for America’s young men/women in ,military uniform is bring them home and help them secure their future as families and productive members of society – particularly jobs after military service. See Veteran Support Organizations & Veteran Blogs at www.filmannex.com/webtv/give More Video for Blogs at www.diplomaticallyincorrect.org including – “How Freedom Wins Free-Market Place of Ideas (Bosnia Precedent for Afghanistan)” - diplomaticallyincorrect.org/films/blog_post/how-freedom-wins-free-market-place-of-ideas/45229 By Ambassador Muhamed Sacirbey – Follow @MuhamedSacirbey Facebook = Become a Fan at “Diplomatically Incorrect” Twitter – Follow us at DiplomaticallyX