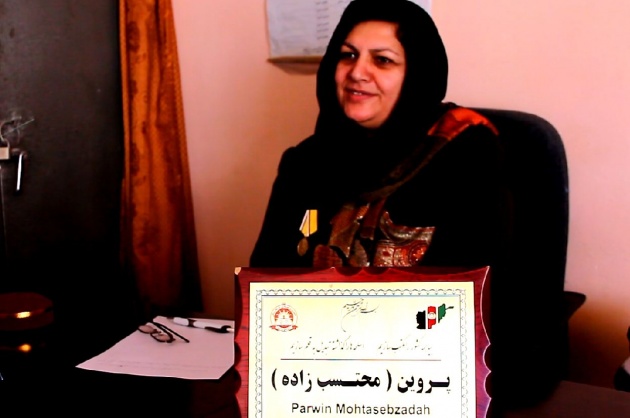 Parwin Mohtaseb Zada is principle of Bagh Nazargah School in Herat Afghanistan. Here is the brief interview with her about education system in Afghanistan.

Can you talk about the school's history?

This school has been established on 1368. In 1372 it became to secondary school then in 1388 it changed to High school under control of one directorate and later they separated and now I am the principle of female part.

Can you please talk about your background and education?

I have BA in Science from Kabul University and after Taliban Regime I worked as teacher in Ali Sher Nawaie High school for 3 years and then became head of teacher and as per my hard working I have been selected as principle and received a lot of appreciation certificates and got the (Lady Malalai) Medal and as per my own request I start working to Baqh Nazar Gah school because this school have poor people and far away from city.

When and why you’re chosen as school principle?

As per my own request based to works which I had in home; also this year I would to stand on interview procedure to become a legal principle at this school.

What are your school best consequences till now?

This school always participates in the schools completions like sports and learning competitions which they became successful in most of them. Also According to the school and teachers activities 3 teacher from this school going to exchange program in Japan.

What do you think about the education system in Afghanistan? How can it be improved?

During of Taliban Regime Education in Afghanistan was too bad and after fall of Taliban it was in basic level but fortunately it developed  day by day and now we catch better result with a better teaching quality.

What else would you want to be built in Afghan schools in addition to the Internet classrooms? What do the kids need?

In first I would like to have an independent school because for now it has 2 shifts (female and male) in one building. So if we separated the learning times will increase and we will have a better quality of teaching.

What do you think about the Examer system in your school?

In first step we should teach students about computer because they are not such familiar with computer; also I would like to thanks from Film Annex to bring these facilities to our school.

This is first time in our school that student learning about computer and about the Examer system I should say that it’s really a good and high functionality system which facilitate our works.

It will also brings easy and transparency to our works and school cause it will prevent form lose of exam papers and will facilitate our works.

Please see the Dari Version of this interview too.