Bones - The Fact in the Fiction 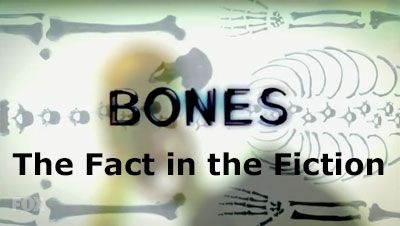 "The Fact in the Fiction" is episode seventeen of season eight of Bones, the forensic drama television series loosely based on the novels and life of anthropologist Kathy Reichs. In this episode, the body of a student theoretical physicist is unearthed in a farmer's field.

Not the Usual Crop

A man is operating a tractor pulling a spiked trailer across a field. He's talking on his Bluetooth headset to someone who is trying to get him to buy shares in the company. By the sounds of it, the now-farmer used to work in the city but gave it up. Then the farmer starts choking as he smells something, which he says smells like a dead animal, then sees what looks like a body in his path, partly chewed up by his previous go-around with the tractor. Unfortunately, he doesn't seem that familiar with the tractor's controls and goes over the body before he can stop.

As Brennan and Booth arrive at the crime scene, he is telling Brennan about an investment for their children's future - asteroid mining. Booth has spoken to some people and thinks it's feasible (which it is). Brennan says that the technologies needed to mine asteroids haven't been invented yet (feasible does not mean the same as currently possible, after all) and doesn't think the investment is a good idea. Hodgins does. Booth brings this up a number of times during the episode. 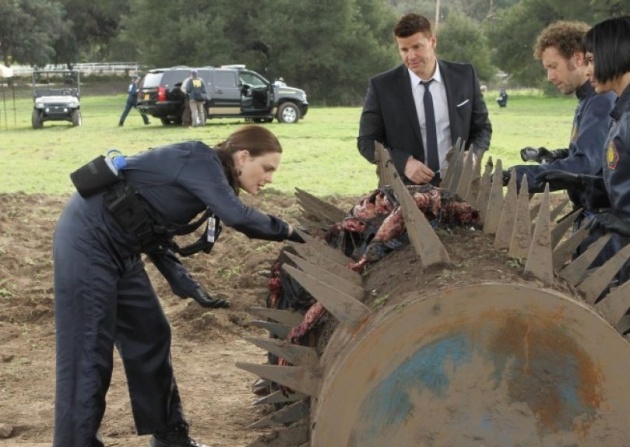 The Body is the Worse for Wear

Brennan isn't pleased that the farmer chewed up the body with his tractor. He is still rather unfamiliar with farming, being a former investment banker. According to Hodgins, the body was buried in a shallow grave not more than five days ago. The body parts have been scavenged, and they are missing a head for the victim. 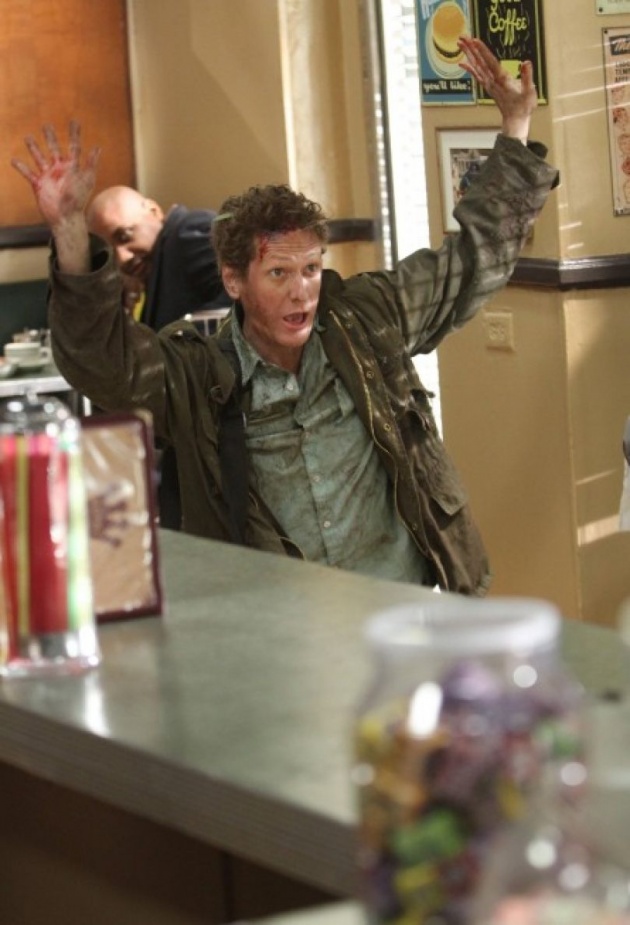 At the diner, Brennan and Booth are talking about asteroid mining again; well, he is. Brennan is still pooh-poohing the idea. Then a scruffy looking and bloody man runs in, says Brennan's name and says he has something she has to see, starting to pull something out of a satchel he has. Which causes Booth to draw his gun and tell him to take his hand out of the bag, and roll it over to him. The man rolls what was in the bag to Booth. It's the missing head and the man is Brennan's new intern. 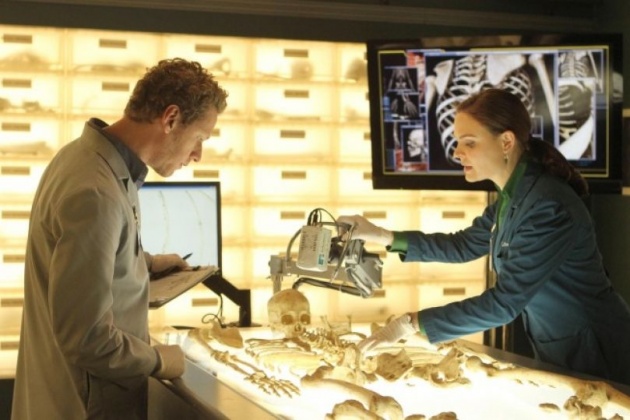 The New Intern Has Multiple Qualifications

Brennan is not pleased to have a new intern and asks Cam why she wasn't told. Cam, in return, asks Brennan if she has read all her emails. Which is no. Brennan is also not happy about the man, Dr. Oliver Wells, bringing the skull to the diner. Cam says that Dr. Wells is enthusiastic and had tracked the skull to a coyote den six miles from the crime scene. Which Brennan agrees is enthusiastic. Dr. Wells is highly qualified; a PhD in physics, masters in astronomy and wildlife ecology and needs two credits for a masters in forensic anthropology. And passed the bar. He's also not that old. 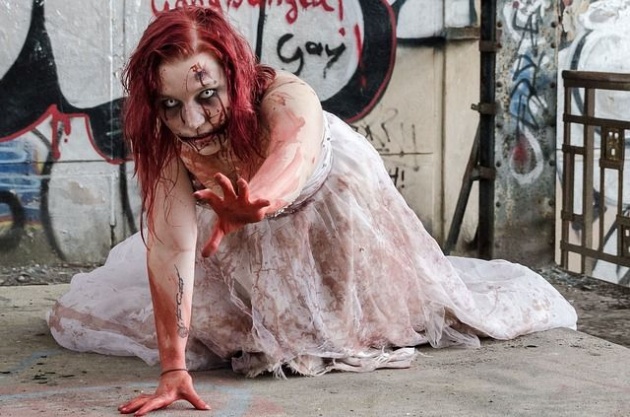 There's No Such Thing as Zombies

A discussion about the dead man not being a zombie - the head was removed, and not by coyotes, according to Dr. Wells - leads to Brennan saying there are no such things as zombies, vampires and ghosts. Which leads to Wells giving an explanation as to how a ghost could be formed. Which leads Hodgins to want to keep him. Brennan is less certain.

Sweets and Booth are heading to the brother of the dead man - traced to a car shop by glow in the dark paint on the body. Sweets thinks a glow-in-the-dark car is a good safety point. The older brother had given the younger, Benjy, a week off, as he was going through college, something the elder, Alex, is very proud of. Alex thinks someone might have killed his younger brother over his truck - his brother's ex, Courtney. 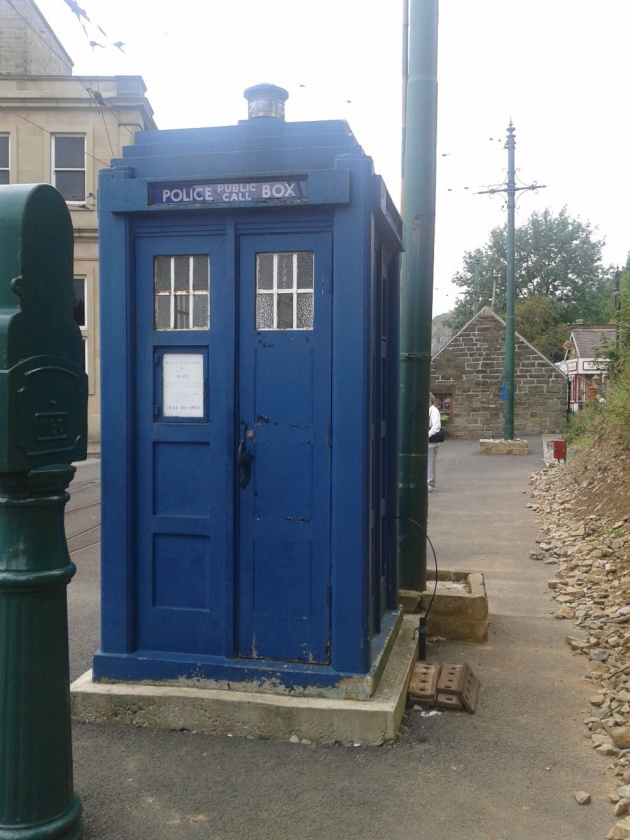 Courtney - who has a very high opinion of herself - says that Benjy was the love of her life, but she broke up with him because of his truck, as she couldn't compete with that. According to Courtney, Benjy was very smart and was experimenting in time travel. She thought the time travel bit was possible but was not impressed with Benjy's infatuation with his truck.

Theoretical Physicists Can Be Odd

Benjy's computer leads them to a theoretical physicist experimenting in time travel. Hodgins thinks it's interesting that Benjy was looking into travelling into the past, as that is theoretically more difficult. He also says that theoretical physicists can be pretty odd. The physicist in question was fired from his job after accidentally electrocuting a student, and the thought is he might have done something similar, then covered it up. Tracking down the cause of death is the first problem, and why the body was moved from one farm to another after death. Which leads to another crime.

If You Could Travel In Time, Where Would You Go?

Dr. Wells does not get on with everyone - although Hodgins likes him - and he does conflict a bit with Brennan. The possibility of time travel causes people to discuss where they would go if they could travel in time.

Bones - The Fact in the Fiction Trailer