Descendants of the Sun Drama Review 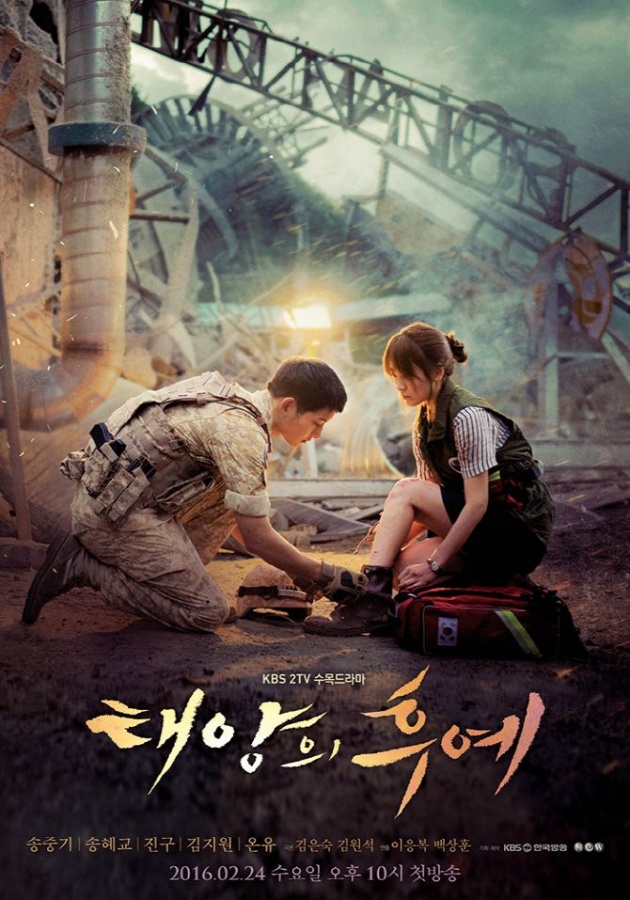 DESCENDANTS OF THE SUN

“Descendants of the Sun” or some of the viewers likes to call it “DOTS” for short is a film directed by Lee Eung-Bok (이응복) and Baek Sang-hoon (백상훈). It was aired from February to April 2016 on KBS2 or Korean Broadcasting Show. This Drama's Genre are Romance, Melodrama, Action and Comedy. The schedule of DOTS is every Wednesdays and Thursdays at 22:00 (Korean Standard Time) and this drama contains 16 episodes. Descendants of the Sun is a South Korean Drama starring Song Joong-Ki (송중기), Song Hye-kyo (송혜교), Jin Goo (진구), and Kim Ji-won (김지원). 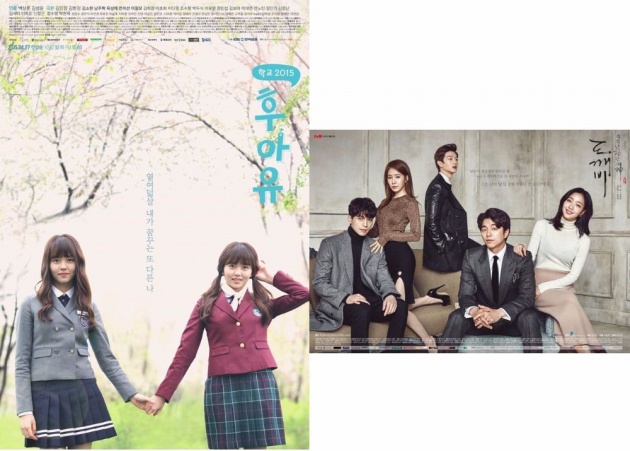 Photo Credit: Asianwiki and edited by me

(back to Descendants of the Sun hehe)

Characters in the Drama 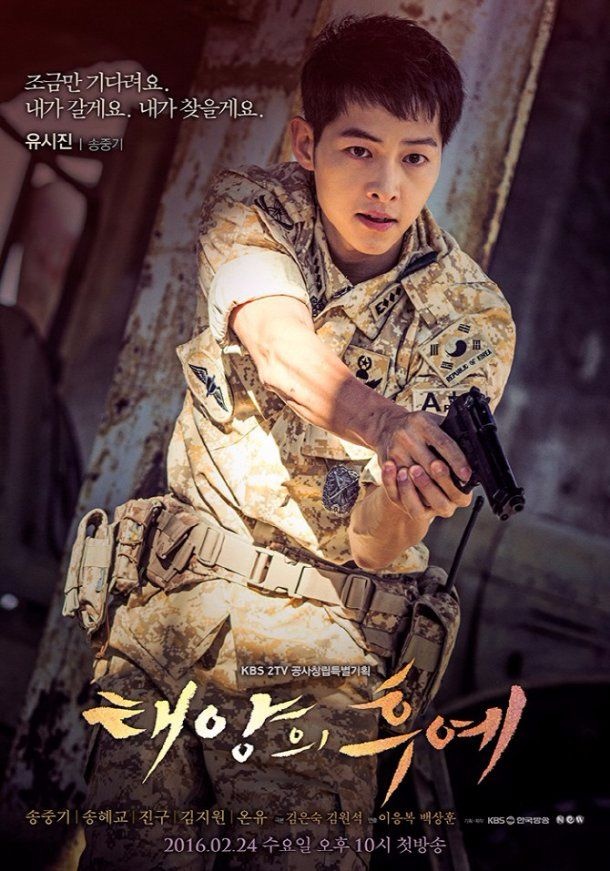 In this Drama Big Boss is inlove with Doctor Kang Mo-yeon and is having a hard time dating her because almost everytime they meet Captain Yoo Si-jin has to go because of his job. 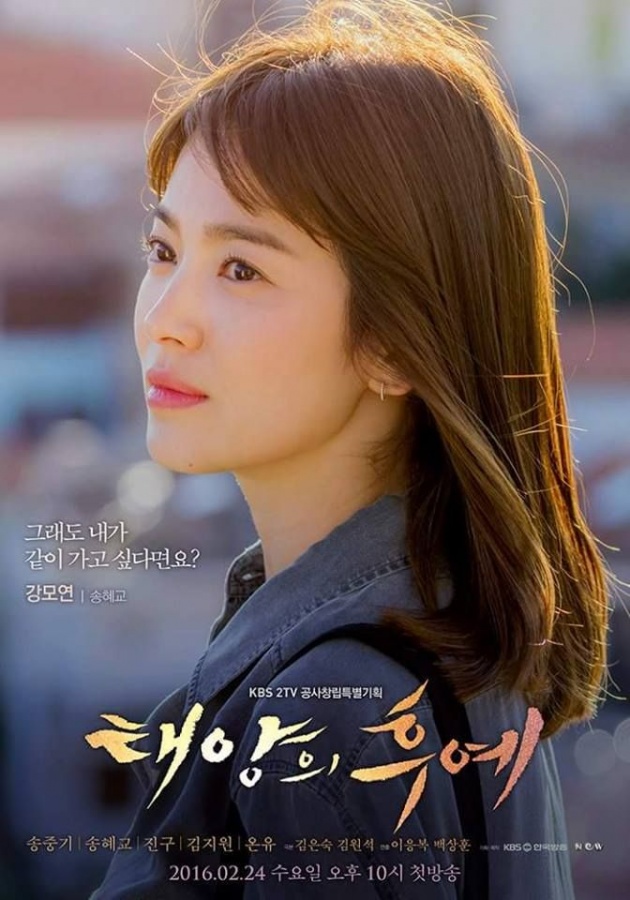 Also known as "Beauty" she is a cardiothoracic specialist who works at Haesung Hospital. Her Medical Team includes Lee Chi-hoon or “Handsome Spaceman “ a 1st year resident of Thoracic Surgery, Song Sang-hyun who is a General Surgeon, Ha Ja-ae who is at the ER Nursing Team and Choi Min-ji a ER Nurse. 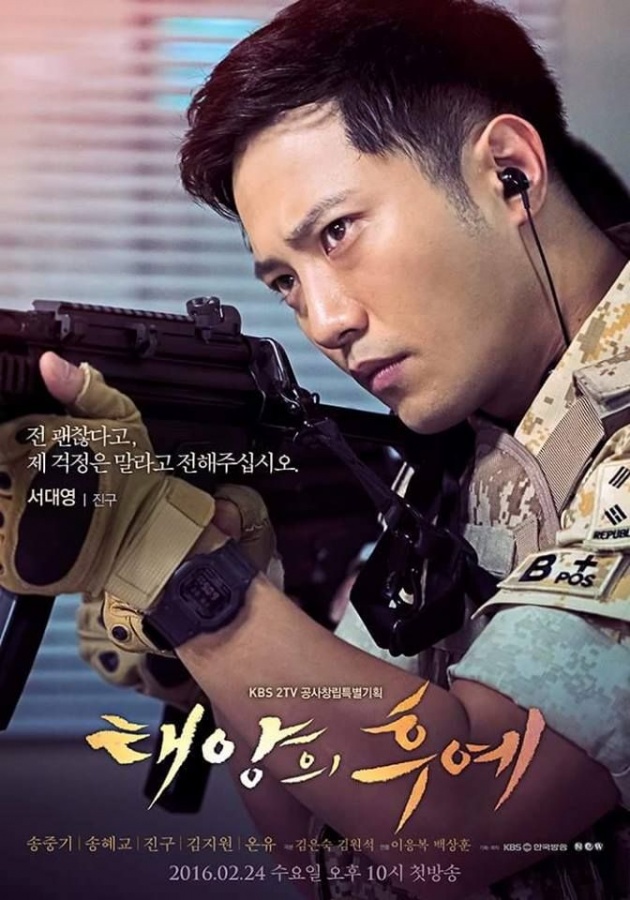 Also known as "Wolf" he is a member of the Alpha Team. He is a soldier even thought he is not working because he still walks and acts like a soldier even when his on vacation. Sergeant Major Seo Dae-young is inlove with First Lieutenant Yoon Myeong-ju. they are both inlove with each other but Lieutenant Yoon Myeong-ju's father doesnt like their relationship. 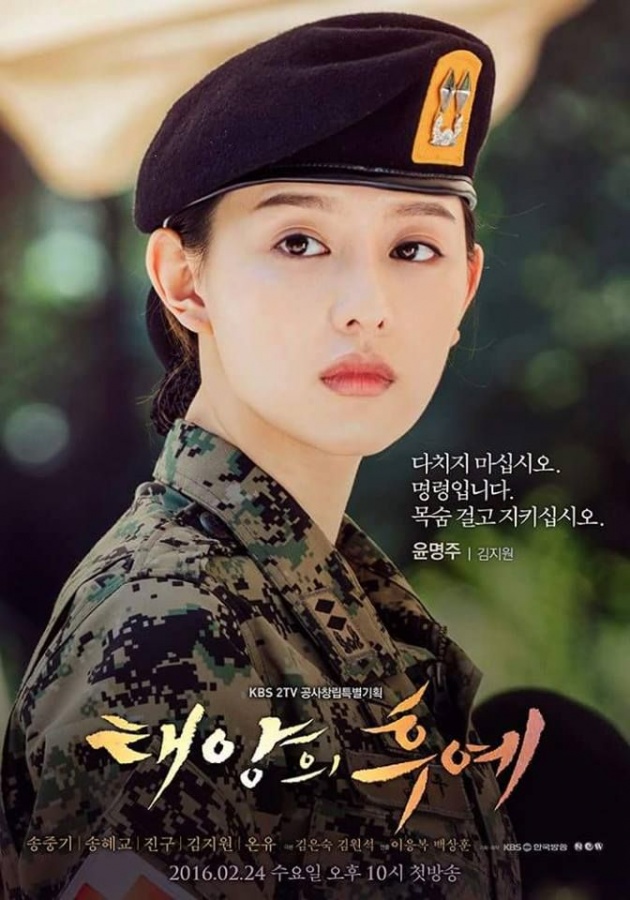 First Lieutenant Yoon Myeong-ju is the daughter of  the Commander of the South Korean Special Forces Brigade, Lieutenant General Yoon. She is an Army Doctor. She met Sergeant Major Seo Dae-young when she had her internship at Haesung Hospital.

Soldiers in the Drama 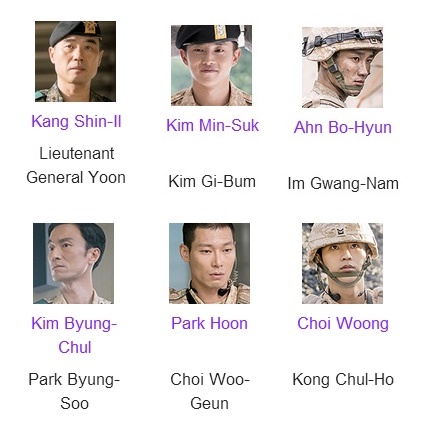 Photo Credit: Google and edited by me

He is the father of First Lieutenant Yoon Myeong-ju and is against her daughter's relationship with Sergeant Major Seo Dae-young. He is also known as "Yellow Tiger".

He is a Lieutenant Colonel.

He was the thief that both Captain Yoo Si-jin and Sergeant Major Seo Dae-young captured. He is the Private First Class Kim Gi-bum.

He is a member of the Alpha Team, also known as "Snoopy" and he is a Staff Sergeant.

He is also a member of the Alpha team, also known as "Piccolo" and he is a Staff Sergeant Class.

He is also a member of the Alpha Team, also known as "Harry Potter" and he is also a Staff Sergeant.

Medical Team in the Drama

Photo Credit: Google and edited by me

He is a doctor in Haesung Hospital. He is a General Surgeon, he has a crush on Ha Ja-ae for a long time.

She is a member of ER(Emergency Room) Nursing Team at Haesung Hospital. She also has feelings for Song Sang-hyun.

He is also known as "Handsome Spaceman". He is a 1st year resident of Thoracic Surgery at Haesung Hospital.

She is Doctor Kang Mo-yeon best friend at the hospital. She is a Pathology Specialist at Haesung Hospital.

He was born on September 19, 1985. He had already finished his mandatory military service. He participated in the Dramas  Sungkyunkwan Scandal on 2010, The Innocent Man on 2012, and one of the most successful Korean melodrama of all time A Werewolf Boy on 2012.

She is a South Korean Actress and she filmed many commercial films already. She was born on October 19, 1992

He is a South Korean Singer and Actor. He was born on December 14, 1989. Onew is only his stage name and his real name is Lee Jin-ki (이진기). He is a member of the famous boy band Shinee. In their group there are five members named Onew, Jonghyun, Key, Minho and Taemin. He is one of the lead vocalist in their group.

DESCENDANTS OF THE SUN CAST AFTER THE DRAMA PICTURES 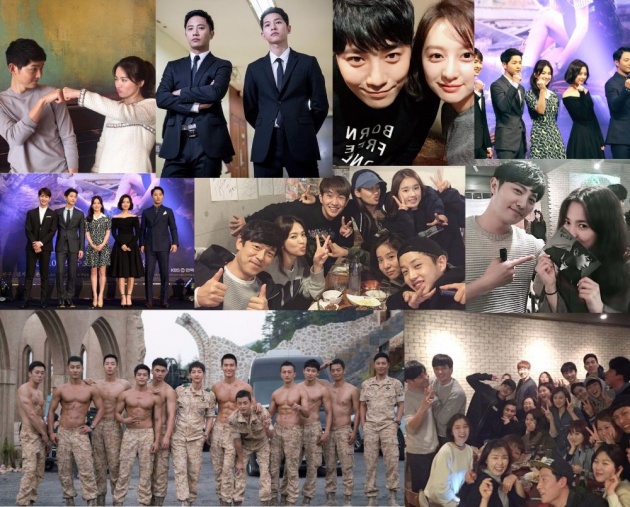 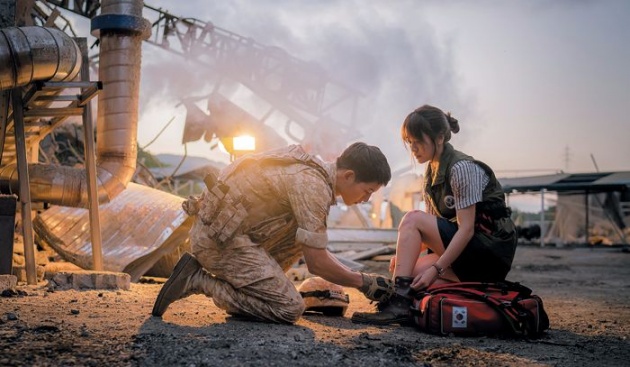 Thank you so much for reading my Blog! Happy New Year Everyone! God Bless Us All :D 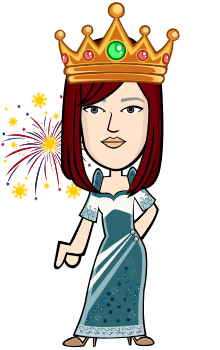 Korean Drama Review: Fight for My Way - Don't You Ever Dare to Say "I'm Giving Up My Dream"

Image Credit: sporadicfangirl.com When you grow up, who do you want to be? Do you feel familiar wi…