"Divergent" is Set to Overtake Box-Office Competition, See My Exclusive Interviews with Cast 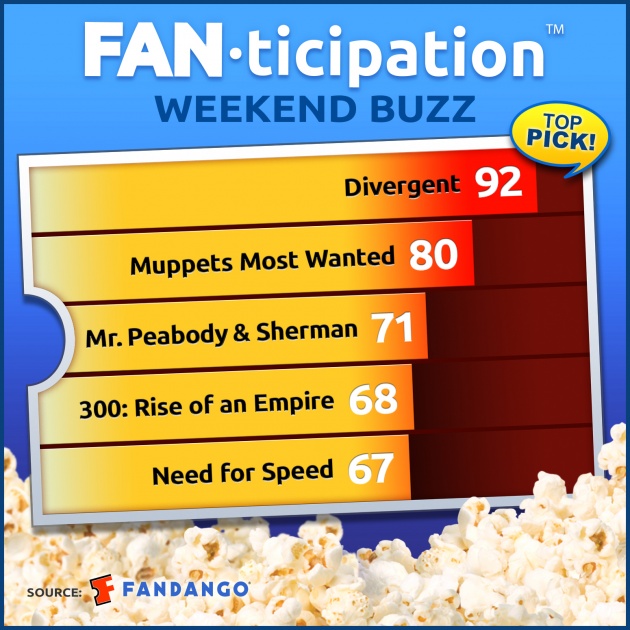 Fandango is saying, the dystopian action-adventure, "Divergent," is poised to top the weekend box-office!  The nation's leading moviegoer destination reveals that their Fanticipation movie buzz indicator gave "Divergent" a dauntless score of 92 out of 100 points (check out my fun "Divergent" interviews below).

But have no fear Muppets lovers!  "Muppets Most Wanted" is resonating with families and scored 82 out of 100 points.

According to an online survey of more than 1,000 “Divergent” ticket-buyers on Fandango:

According to an online survey of more than 1,000 “Muppets Most Wanted” ticket-buyers on Fandango:

So, are you interested to know more about Fandango's Fanticipation?  Here's what the press release says:

Known for having its finger on the pulse of moviegoers, Fandango’s movie buzz indicator, Fanticipation, provides statistical insight into the movies fans are planning to see in a given weekend. Fanticipation scores (based on a 1 to 100-point scale) are calculated via an algorithm of Fandango’s advance ticket sales, website and mobile traffic, and social media engagement.  Fanticipation is not intended as a forecast of the weekend box office; it is a snapshot of movie fan sentiment.