In 2012, Film Annex used its social media platforms to promote its services and short film makers. We focused on certain platforms, launched new ones. We promoted our filmmakers' work and built relationships with them. About it, Lisa Stock says: "I appreciate that Film Annex is active on social media and will share or retweet one of their filmmakers' posts."

Among all this tagging, re-tweeting and posting, what can we say about Film Annex on social media in 2012?

We ended the year with over 220,000 fans. Our Facebook page this year has been through the introduction of the new Timeline which allowed us to build a more visually aesthetic profile and highlight our most popular movies. Every business on social media would agree that, on Facebook, posts with pics are the ones that created more engagement. Posts related to our corporate news and clients' interviews were also substantially 'liked' and shared. We also introduced our Behind-the-scenes photo albums full of production stills and drawings from our filmmakers' movies. Again, those pics are very popular and received several likes and comments and were relayed on other social media platforms such as Twitter. 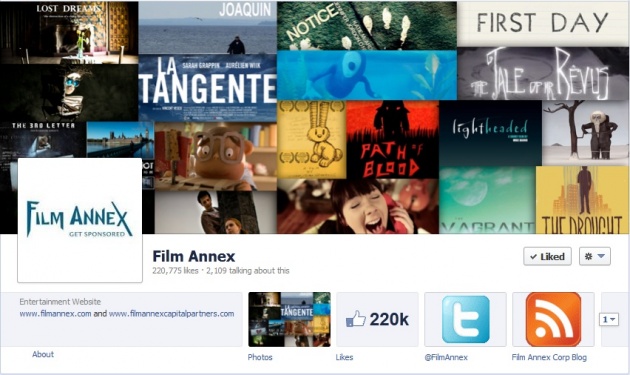 Most of our filmmakers said that Twitter is the platform they principally use as they think it's the most efficient to connect with other filmmakers or film industry professionals. So we decided to focus on them by creating our Twitter version of Eren's Picks. We also saw an increase in the engagement, especially with our filmmakers, who regularly tweet us their new work, comment on a blog, promote their Web TV or recommend our platform. Twitter is the platform where we can be more casual, post pics from interviews, talk directly to one of our filmmakers or reach out to a new one. Tagging other people's Twitter is the key to create engagement and let them know we talk about them. The focus on using the good hashtags (keywords) was also an essential part of the work done on Twitter.

We reached 154 followers at the end of December, which is the biggest increase of followers over the year compared to the other platforms. In the second part of the year, we decided to focus more on LinkedIn as it got a stronger impact in the BuzzScore and is the platform to connect on a more professional level. We publish there our corporate blogs, press releases, and important news.

We also launched Film Annex's Pinterest and Instagram profiles. Pinterest is still in the works to highlight our most active filmmakers, their work, our new movies, etc. Instagram present more of a behind the scenes look at Film Annex, its team and activities. 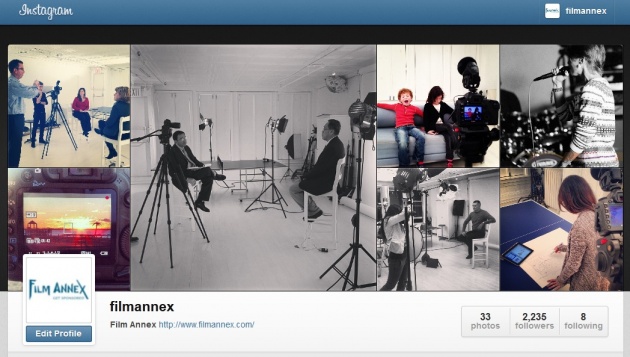 In 2012, and continuing this year, we interviewed our filmmakers on social media film promotion and how they see those platforms as a new film distribution medium. Some of them became real experts in sharing on social media. You can see the main blog here and scroll-down in it for more concrete filmmakers' examples. They all agree that social media is where people learn about movies now, watch previews, exchange about them, and therefore, where they, as filmmakers, have to be. "I promote my Web TV via a page on Facebook that I created specifically for it. [...] I have the opportunity to send it out via my Web TV Facebook page and reach even more people who have liked the page because they are interested in the content." - Mark Kuczewski. And social media is all about keywords and how to make people click on what you post: "You have to think 'What would make me click on this link?' So now I've started to title my blogs a bit more interestingly in terms of other work, like my art. I might title the link something like 'Should I do more to this?' That way, I'm encouraging people to interact and be involved in the process by giving them some ownership." - Amy Hill.

What's up for Film Annex's strategies for social media in 2013? Follow us to find out!

To finish, have a look at this retrospective of what happened in social media worldwide in 2012.