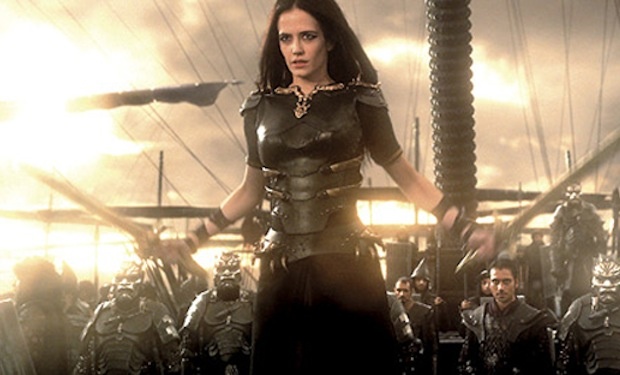 It is possible to be over-saturated with sepia blade-and-balderdash dramas. Zack Snyder’s 2006 film 300 begat the television series SPARTACUS which, in turn, begat its own spin-off series BLOOD AND SAND. You know the look. Muscular blokes scantily clad in leather upholstery and nose-flattening helmets bare perfectly white teeth because we all know the Gods gave them Fluoride as well as courage whilst the women dress similarly (whatever happened to white flowing robes and garlands; these movies and shows have put garland makers out of business). They rush at one another in some unspecified CGI landscape and slash at one another with perfectly sharpened blades. It is always blood that splatters outwards, never severed limbs or internal organs. I want to see the film or TV show where, in the heat of battle, one warrior slashes at another to which the opponent replies, ‘thank you for removing that thorn from my foot.’ Wait – wrong legend.

I don’t think there was any need for a cinematic follow-up to 300 and if there was why not call it 200, according to the law of diminishing returns for sequels. Also it would be much braver for 200 people to tackle an army than 300, though the result would be the same. The film 300: RISE OF AN EMPIRE is all about how armies are prepared to join up to fight for democracy, Grecian style. You remember: women were denied the right to vote. Only men of a certain age in the city states could participate. Yeah, let’s fight for that against some funny looking bloke whose father was felled by a lucky arrow, took a bath and turned out half-man, half-God and all silver-chain-model.

Our hero is Themistocles (Sullivan Stapleton) – call him Thermoman, though he is not a hot drink of water.  He is the son of – wait, these movies don’t do the Homer thing. Homoerotic, yes; Homeric, no chance! It was his arrow that pierced the father of Xerxes. He should have killed the son too only he wasn’t a completer-finisher. The movie takes places roughly at the same time as 300, so while Xerxes’ forces are battling Gerard Butler’s Leonidas, his other commander, Artemisia (Eva Green) takes on Themistocles, this time in the water.

I am convinced that Artemisia really could have benefited from a dating website. None of her generals whom she sends out to do battle with Themistocles’ navy are up to much. ‘I will bring back Themistocles’ head on a pike,’ promises one. ‘I will bring Themistocles’ head on a plate of fruit salad’, pledges another (or he does in my version). Their attempts to crush Themistocles’ fleet end in bitter disappointment, allowing themselves to be easily ambushed and boarded. It is only after Artemisia invites Themistocles to join with her in a dinner that ends with sex as combat (Themistocles is unmarried and we can see why) that she decides to get personally involved. She inflicts a military defeat on the warrior who will not join her and it all gears up for the final battle.

The big question is: will the Spartans join the Athenians and the other motley group of city states – an army of carpenters and out-of-work garland makers?  Lena Headey reprises her role as Leonidas’ widow, who I can only conclude has seen STAR WARS EPISODE IV, and we can guess the outcome.

No one could accuse 300 and the sequel (the latter directed by Noam Murro) of subtlety. But 300 adapted like its sequel from a graphic novel by Frank Miller, had a sub-plot in which politicians betrayed warriors, which doesn’t come up in the follow-up. David Wenham also reprises his role but this is 300 without charisma and a hero we really root for. I saw it in the home of Sparta Prague Football Club and even a local audience didn’t go for it.

Hello everyone I would like to introduce Rise. Current value as of this writing is 0.00000618 BTC/RI…

THE PURGE : a movie review

Hello Miss Hillary and other bitsers. I just finished watching another movie today and started to wr…