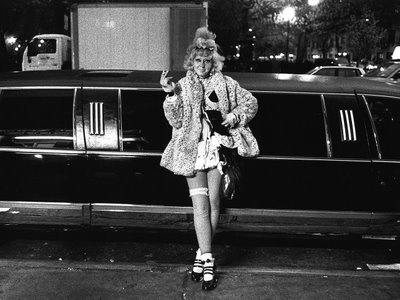 $6 to $8 Billion will be spent on 2012 US elections, a geometric rise from just a few years earlier, but how will money be spent? Most noticeable will be the money spent on traditional/broadcast media. However, following the general trend in advertising as a whole, more than half is likely to go through new media – probably allowing for greater efficiency of targeting audiences and optimizing effectiveness of the message. From Time of Rome: However, with so much money flowing in, what other “strategies” might be employed? Get your core out into minibuses and driving them to the polls has been a part of the effort for some time. Will that now be “upgraded,” so to say, with a chauffeured limo and fridge full of “refreshments” to spike the election thrill a bit more? (Above Photo-Voting Escort?) Perhaps, anything is possible, as the Pandora’s door to election spending has been pried open by the “Citizens United” Supreme Court ruling that effectively unleashed a flood of Super PAC spending. There is a long history of buying elections including Rome. The “aristocracy” (Patricians) competed amongst themselves through transparent election-buying for Consul to win favor among citizen-commoners (Plebeians) until meritocracy was implemented and the Government Executive (the 2 Consuls) were elected on basis of service and capability – Rome Republic flourished. This system failed again when a new class of ruler emerged – the “first citizen” who eventually assumed status of Emperor and living divine- “Caesar.” "Inform, Involve & Empower the Citizen" - Internet Optimizes: Spending, for good or bad, cannot be effectively contained - a bit of Dutch boy with not enough fingers for the dike. The Internet has emerged as the most critical culprit and savior. Of course, more Super PAC and other funding will go toward the net. However, unlike the broadcast or print media, the Internet is a two or multiple way communication media. The message will have to carry substance and stand up to scrutiny. It is also a very effective way to Twitter or otherwise remind your voting base to go to the polls as well as engage and influence. Of course, whether at Film Annex – “AAA Country” - webtvs.filmannex.com/aaacountry or at Diplomatically Incorrect, (www.diplomaticallyincorrect.org), we are only too keen to see another flow of ad revenues. However, part of our model is involvement and empowerment of the citizen as well as informing. (Between Film Annex and Diplomatically Incorrect, there are well over 15 Million monthly viewers and 500 Million Page Views – 75% to 80% from the US). This web model facilitates best “Giving voice to the Global and American citizen”! For $6 Billion Estimate Read - www.rte.ie/news/2011/1103/uselection.html For $8 Billion Estimate Watch - www.newsmax.com/InsideCover/election-cost-price-tag/2011/04/14/id/392926 By Ambassador Muhamed Sacirbey Facebook = Become a Fan at “Diplomatically Incorrect” Twitter – Follow us at DiplomaticallyX War Crimes Justice Channel - diplomaticallyincorrect.org/c/war-crimes-justice FOLLOW Mo on Twitter - diplomaticallyincorrect.org/