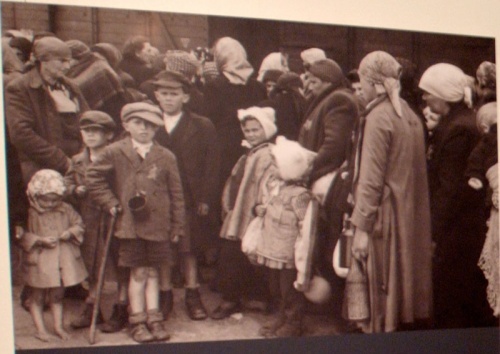 As students learn more about the Holocaust and the significance of this history today, they will soon discover its connection to their own lives and communities,” according to Kiyo Akasaka, UN Under-Secretary-General for Communications and Public Information as a new online educational resource that debuted at UN Headquarters today (January 23, 2012) and showcases video testimonies of survivors. IWitness – produced by the Shoah Foundation Institute at the University of Southern California – provides teachers and students access to the video testimonies of more than 1,000 Holocaust eyewitnesses from the Institute’s archive of nearly 52,000 testimonies. UN has partnered with the Shoah Foundation Institute in bringing more than 350 high school students to the world body’s Headquarters to discuss their experiences with IWitness and to interview Holocaust survivor Roman Kent, whose testimony they have studied as part of IWitness. “Our collaboration with the Shoah Foundation Institute is another wonderful example of how the Holocaust and the United Nations Outreach Programme works with organizations around the world to help young people – like yourselves – understand the history and horrors of one of the world’s greatest tragedies that occurred many, many years ago before you were born. With the IWitness online application, students everywhere can search, watch and learn about the real life stories of more than 1,000 Holocaust survivors. You will also learn about the dangers of hatred and prejudice in our world today.” Link to Iwitness at University of Southern California - iwitness.usc.edu/SFI/. Remembering Holocaust/Bosnia Genocide: The Shoah Foundation Institute was established by United States filmmaker Steven Spielberg in 1994 to collect and preserve the testimonies of the survivors and witnesses of the Holocaust. It maintains one of the largest video digital libraries in the world – nearly 52,000 video testimonies in 32 languages and from 56 countries. I met Steven Spielberg at the Holocaust Memorial Museum just as he was launching IWitness and the genocide in Bosnia & Herzegovina was under way. It will be up to the current generation of Bosnians/Herzegovinians to insure that the causes, crimes and still clear consequences of genocide are not lost in the global and domestic audience and that we take away from it both lessons and initiative to reverse consequences, fear and hate. Particularly American-Jewish activists took lead in speaking out against genocide in BiH, thus also making legacy of Holocaust activist and living. (See our Interviews, Part 1 & 2 – “Jews Against Genocide – A Coalition for Bosnia” - diplomaticallyincorrect.org/films/movie/jews-against-genocide-a-coalition-for-bosnia-part-i/20182 - Part 2 - diplomaticallyincorrect.org/films/movie/jews-against-genocide-a-coalition-for-bosnia-part-ii/20186). Students/Teachers/Lessons: “Through IWitness, survivors will continue to teach students about the Holocaust, inspire them to oppose intolerance, and empower them to develop the literacies needed for the 21st century,” said Stephen D. Smith, the Institute’s Executive Director. “We are grateful to the nearly 52,000 witnesses who have entrusted their memories to the Institute as a guiding light for all humanity.” International Day of Holocaust: International Day of Commemoration in memory of the victims of the Holocaust, which is observed annually on 27 January. This year’s theme is “Children and the Holocaust.” See our Film Report –“Auschwitz to Remember & Never Again” - diplomaticallyincorrect.org/films/movie/auschwitz-to-remember-never-again/24174 CONTACTS: In a related development, the UN Educational, Scientific and Cultural Organization (UNESCO) announced that Samuel Pisar, a Polish-born Holocaust survivor and acclaimed international lawyer, author and human rights activist, will be designated as an Honorary Ambassador and Special Envoy for Holocaust Education. For more information about the Programme, please visit www.un.org/holocaustremembrance. For media accreditation, please visit www.un.org/media/accreditation, call tel.: +1 212 963 6937 or write to e-mail: malu@un.org. Contacts: Kimberly Mann, Manager, the Holocaust and the United Nations Outreach Programme, tel.: +1 212 963 6835, e-mail: mann@un.org; and Anne Marie Stein, Communications, USC Shoah Foundation Institute, tel.: +1 510 893 3271 ext.109, e-mail: annemarie@oneprstudio.com. By Ambassador Muhamed Sacirbey Facebook Become a Fan at “Diplomatically Incorrect” Twitter – Follow at DiplomaticallyX FOLLOW mo @MuhamedSacirbeyand oppression.