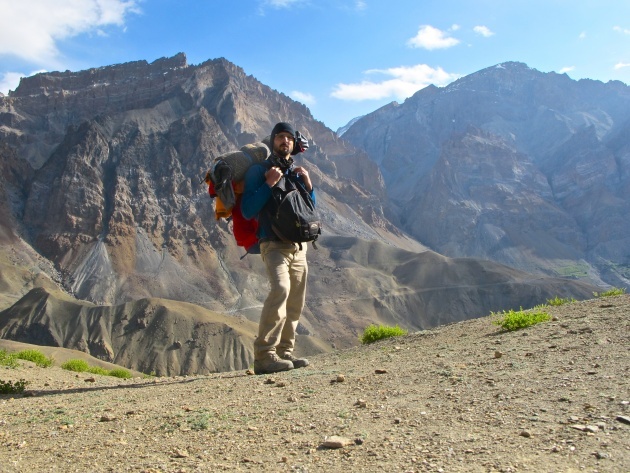 I love trekking, and for a mountain-lover like me the Himalayas represent the top of the top. During the summer of 2012 I spent a few weeks in the Indian section of this massive mountain chain, mostly focusing on the Zanskar Valley. There's only one "road" accessing this isolated region, and my goal was to cross the whole Zanskar Range on foot - along a a wonderful 2-week trek - before local authorities could complete the construction of a new road linking the heart of the valley to the main road further north. Zanskar is sandwiched between Ladakh and Kashmir, and to reach the trailhead at Padum I needed first to get to the border town of Kargil, then head south through a back-breaking 11-hr drive along one of the most perilous roads in the world. 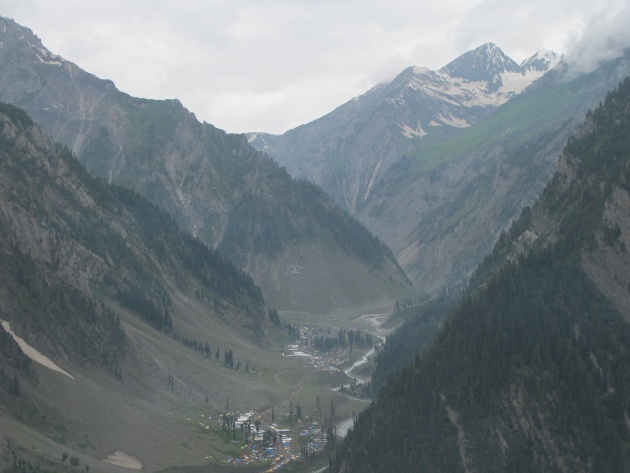 Ladakh and Kashmir are 2 neighboring regions, but couldn't be further away from each other. Geographically, the elevated desertic plateau below Ladakh's barren peaks is a world apart from with the lush valleys of green Kashmir, but the fracture between these two Indian states goes beyond their physical differences. Muslim Kashmir and Buddhist Ladakh have much more in common, respectively, with Pakistan and Tibet than with the rest of India. Their facial features, lifestyle, traditions, even the food have nothing in common, and the Indian government struggles to keep them together. 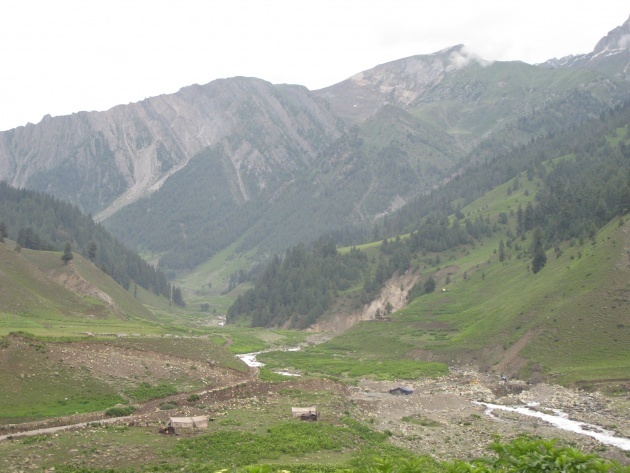 Kashmir represents the border area between two countries that don't like each other, and has caused Ladakh to grow separatist tendencies, especially following the repeated open conflicts between the Indian and Pakistani armies. The population in this region has been plagued by three Indo-Pakistani wars, which have left nothing but destruction, traumas, and strong limitations to freedom. Kashmir has been defined one of the most militarized zones in the world, and the tension between the two sides of the Line of Control is palpable. In every conflict the two superpowers - both claiming this region - have blamed each other, a policy that has continued pretty much to these days. 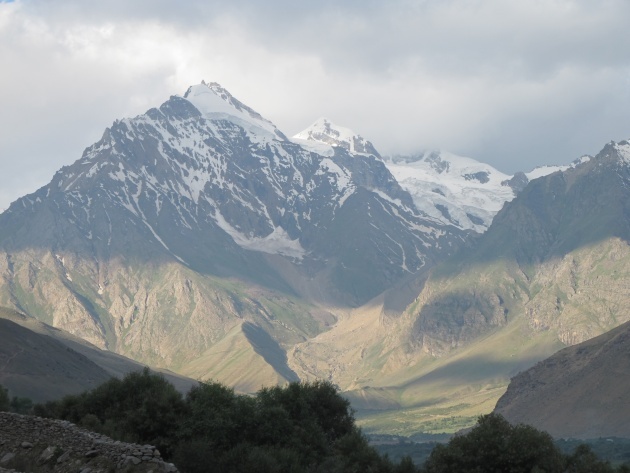 Kargil can be reached either from Leh in Ladakh, or from Srinagar, in Kashmir. I had the opportunity to spend 3 weeks in Ladakh in 2011, so I decided to reach Zanskar through Kashmir, a region I had never visited. I'm so glad I did. The political situation looked stable at the time, and I was fortunate to spend some time in and around Srinagar in a period in which tension between India and Pakistan had somehow eased. As soon as I exited Srinagar'a airport, Kashmir's security conditions hit me right away. As I was walking toward the exit of the airport, I was immediately approached by a local, who started asking me every type of questions. Conscious of the abundance of touts in the city, I ignored him and continued walking. He soon became more insistent, to the point that he put his body directly in front of mine, preventing me from making any further step. Now, keep in mind that he wasn't wearing any type of uniform; to my knowledge, he was just a dude asking for trouble. I put on my "don't mess with me" face, and told him that if he didn't let me pass, I would call the police. As soon as I mentioned that magic word, a policeman actually showed up and took control of the situation. He told me that the fellow was actually working for him, and answering logistic questions was normal practice for any tourist visiting the region. He wanted to know my full name, where I was staying, for how long, etc. "It's for your own safety", he declared, and after I gave him the answers he was looking for, he immediately let me go. As I left the main terminal, I saw a line of cars at the entrance of the airport: authorities were accurately searching every vehicle before it could get access to the airport... Welcome to Kashmir. 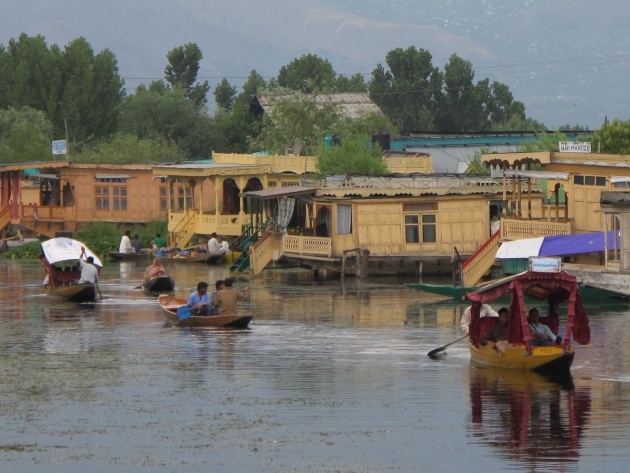 During the following few days I would witness the most intense implementation of military I had ever seen in my life. Even though it was a period of "peace", towns had heavily armed soldiers at ever corner, with one finger always on the trigger. The countryside wasn't immune to this alert status. While I was making my way to Kargil on a bus, through my window I could see servicemen evenly spaced along the route 100-150 meters away from each other. Checkpoints were frequent and painfully slow. Saying that the road was rough is an understatement: as it was snaking up and down across high-altitude passes, I could see the tires of the bus inches away from the edge of the path, with a precipice of thousands of feet below us. Some sections were so narrow that we had to wait and let vehicles from the opposite side pass through, especially when we were crossing army convoys. I once counted 137 trunks! And this was going on during a time in which hostilities had been suspended. 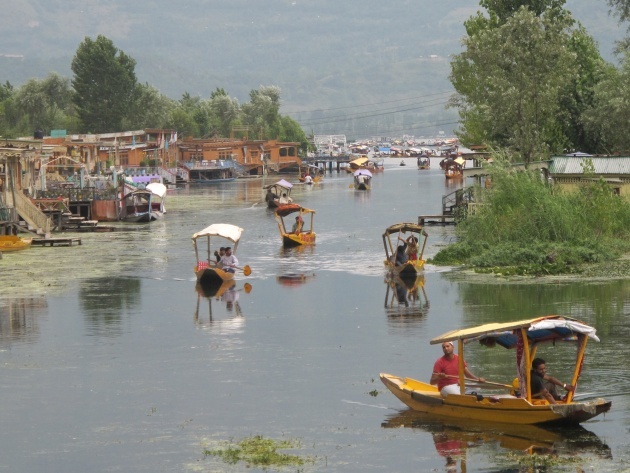 Despite the tension never leaving the air, I was fortunate to meet very friendly and welcoming people. They couldn't wait for the situation to improve, and were thrilled that there hadn't been any shooting during the past few months. Nevertheless, they could hardly believe I had gone that far without a guide, and were curious to know the reason I was there. Just to describe how nice people were in this area, let me tell you a story. On my way back from the end of my trek to Srinagar, I was looking for public transportation, but there wasn't any. So I decided to walk along the road and ask for a lift. Everybody would stop to take me in! It was the easiest hitchhiking experience in my life. At one point I was in a car with an army officer who couldn't go any longer in my direction. When he stopped the car, he flagged another vehicle, and "asked" the conductor to let me in. I still remember the face of the driver of that car, not quite happy to see me, but resigned to the fact that he had to accept my company for a few hours. 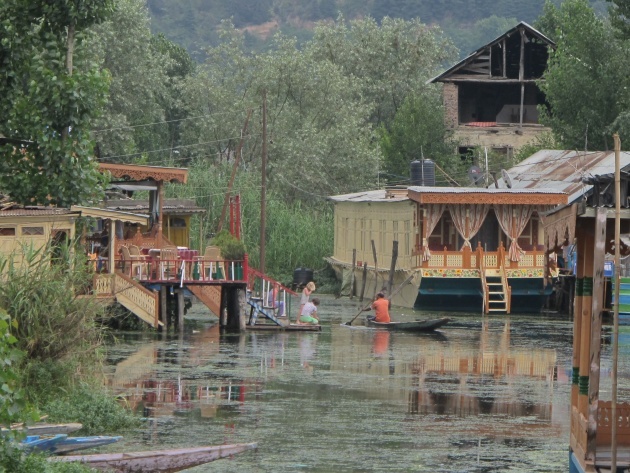 I wish the truce had lasted longer and the Kashmiri people were living in peace right now, but unfortunately that's not the case. During the last few months tension has worsened, and the situation has deteriorated. Last May four Indian soldiers were killed in an ambush by separatists Kashmir militants. Last month another was murdered in a local market. After so many years, both sides still continue lose men. Because of the increasing violence, curfew was recently implemented in some Kashmir districts. As a message of peace, at the beginning of September orchestra conductor Zubin Mehta (himself Indian) held a concert in Srinagar, but this was seen by many separatists as an "attempt to legitimise Delhi's rule in the disputed region", BBC News reports. 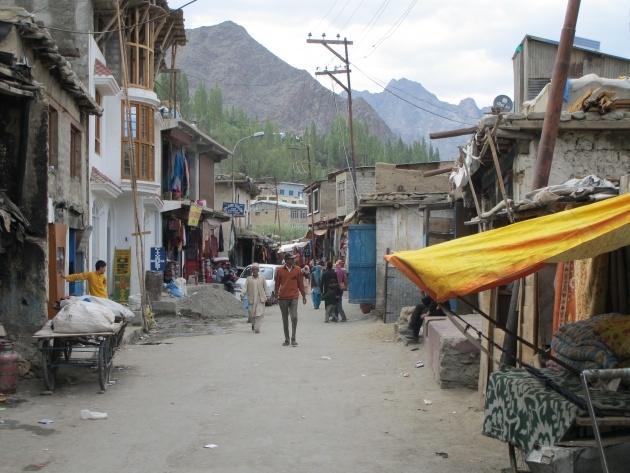 I have no concrete power to alleviate the pain of the Kashmiri people. However, I do have a computer, and can use social media network strategies to increase public awareness about their situation. My hope is that by sharing on social media my thoughts and prayers for a peaceful solution of this never ending conflict, more people around the world will join me. What we need is an aggressive social media campaign asking the governments of India and Pakistan - along with the Kashmir militants - to sit down and do more. I'm not taking sides with either country or political group, but only with the local population. I've talked with some local Kashimris and could see their pain. They're tired of a conflict that never seems to stop. They just want to go on with their lives. They just want peace. 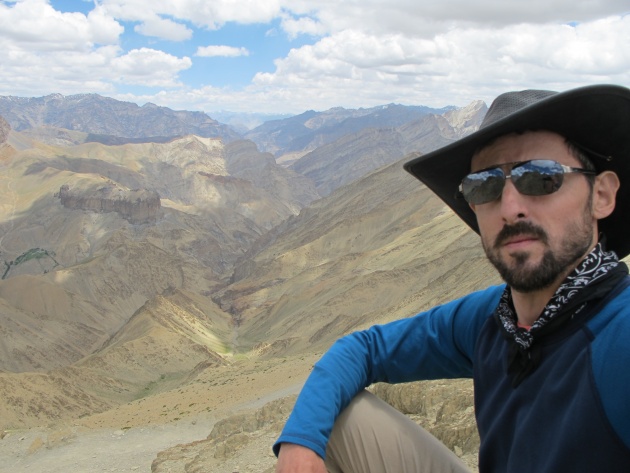