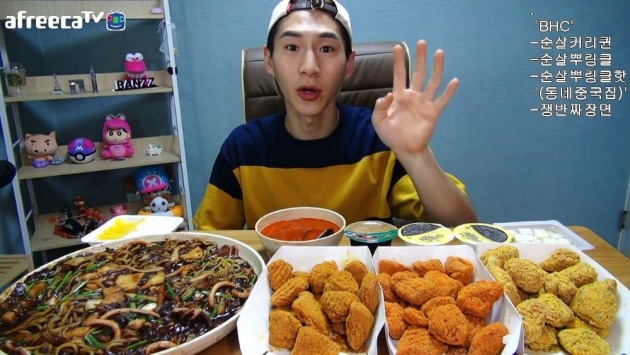 Mukbang/Meakbang means 'eating show', it is the act of eating a large quantities of foods in a live feed or recorded video. The video is posted in an online sites where users watched a person eat and interact to them.

For some people, Mukbang for some people who wants to eat something delicious but couldn't have it. Also, Mukbang are for people who doesn't want to eat alone, they access to this live feed to feel the sensation of someone is eating with you.

In each broadcast, a host will often interact with their viewers through online chatrooms. With the rising popularity of these eating shows, hosts have found lucrative ways of benefiting from the online show. Many hosts generate revenue through mukbang, by accepting donations or partnering with advertising networks 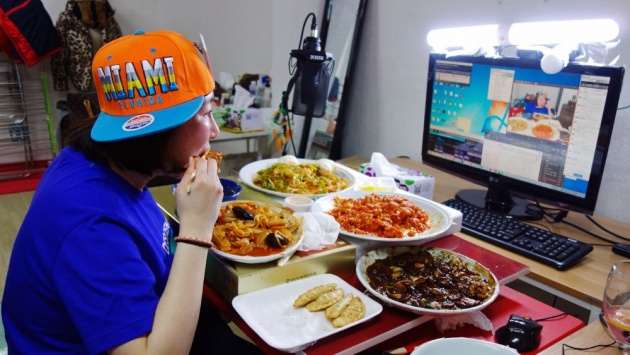 Mukbang stars are the people who eat and broadcast for living. they tend to gathered a masses of people in a chatroom and later on do they act. Top 8 of Mukbang stars of famous Mukbang streaming site - Afreecatv 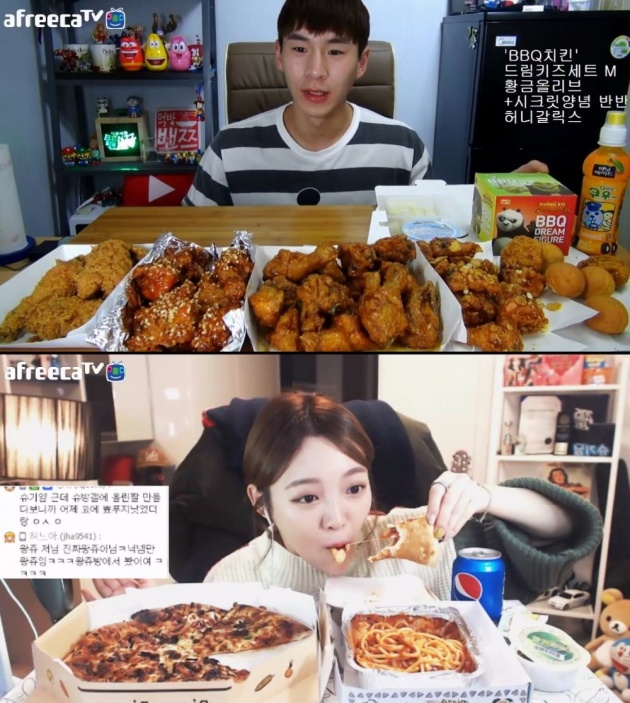 In South Korea, there was a drama called Let's Eat that focused on people who were brought together due to their love of food. In the drama, the characters explore various restaurants and after each episode, the featured foods became a hot topic among young adult viewers. Viewers sought out these restaurants.

The growing industry of Mukbang affect a lot of people. Massive amount of viewers in every Mukbang, the making of Mukbang stars, and of course gaining profits by the use of viewers percentage and donation from them. Mukbang Shows of Korea catched the attention of netizens, not just in Korea but also internationally. 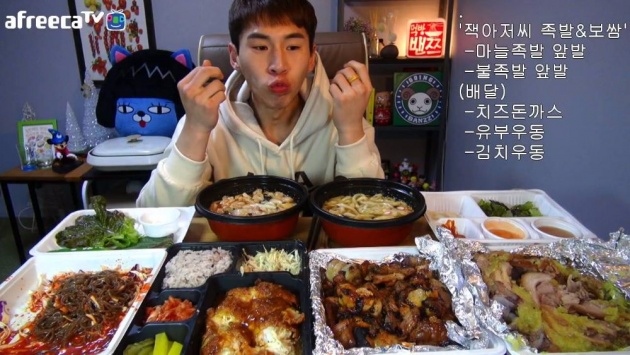 Man So Jung or known as BJ Benzz/Banzz is a mukbang star that is currently streaming in Afreecatv and established his own channel at YouTube on July 2013, with the username, Eodyd188od. He gained so much popularity that Mukbang have become his way of income.

Trivia: The reason why he chose his nickname Benzz is because he wanted to ride a Mercedes Benz

♡ BJ Banzz also goes to places to eat and broadcast ♡

One thing I love about BJ Banzz is his creative way to bring food. He manages to go outside his comfort zone and goes to restaurants out there. One of them is his YouTube Video entitled "Banzz▼Outdoor Eating Show - Spicy Pork Stew!!! at Babjangin 16" I watched the entire episode of this one and amazed how he manage to eat that many infront of other people. He also mention in the video that the employees and manager was shocked and ask him if he is serious in all of the food he ordered from them. 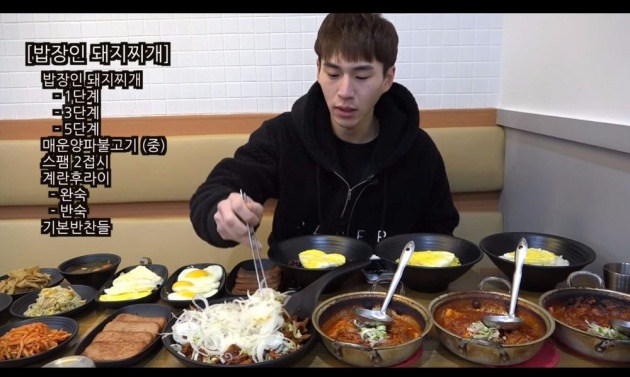 He ordered same kinds of stew but differ in spiciness. The mild, medium and the most spicy. He also likes the black rice and different fried rice. The Spam and Egg did really mixed with the taste of the fried rice and stews, he even ordered another Omelette and Spam.The customers look at him and was amazed because he finished those bunch of foods. 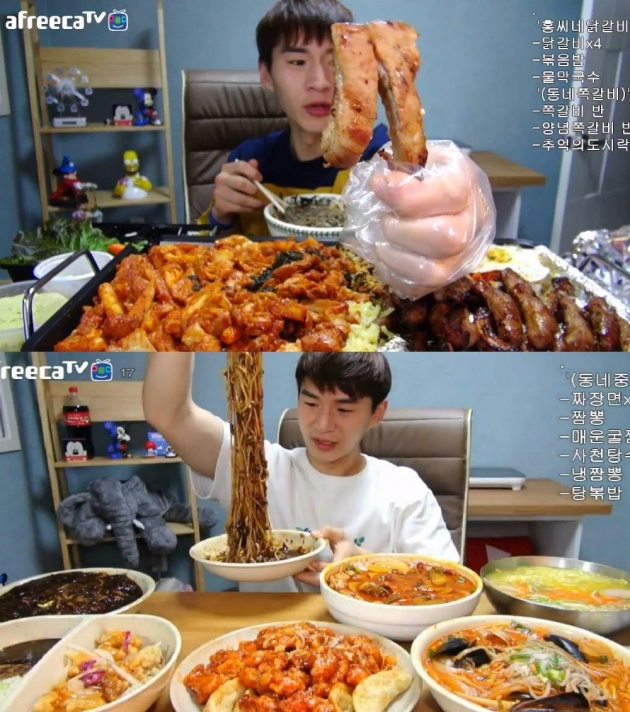 Among other BJ's of Afreecatv, BJ Banzz is considered as cleanest of them all. The Neatness of his table and the Hygienic method he do to make sure not a single stains would cover the table. We can't say he has a Obsessive compulsive disorder or OCD because of how he cleans the plate, Maybe he maintain the cleanliness to have appetizing environment for the viewers.

The video above only shows that BJ Banzz really loves cleanliness, compare to his opponent which has a messy style of eating. I can't stop giggling whenever I watch this video, BJ Banzz manage to be on a relax mode while the other one tends to be on a pressure. 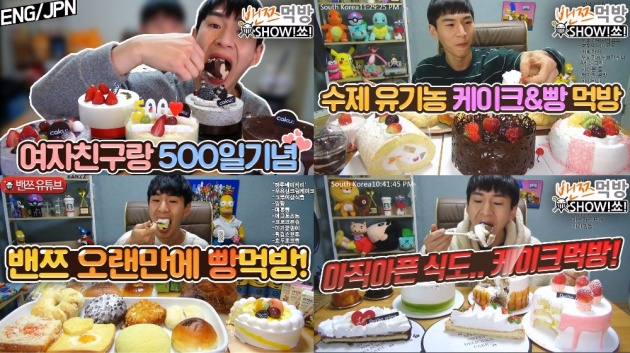 BJ Banzz really like sweet foods and dessert. Cakes, Pie, Rolls, Donuts, Ice cream and many more. Whenever I watch some of his dessert videos, I always thought of Diabetes, consuming a lot of sweets in one day can easily increase the sugar intake in his body. Well, some of the dessert in eat are a special pastries which has a low number of glucose inside it.

In one of his videos which entitled 크리스피 도넛 신제품 33개 도전 EatingShow Challenge 먹방. He ate a 4 dozen of Krispy Kreme Donuts or 36 assorted donuts in just one seating! but not like Food Challenges, Mukbang eat the food slowly and the BJs indulge the food for the viewers.

BJ Banzz took advantage of his Mukbang activity. He used the intake of large amount of calories and protein to build his body. He transformed all the fats he has eaten to muscles. So from time to time, BJ Banzz make sure to exercise regularly to maintain his 6 packs abs. So don't worry if BJ Banzz consumes a lot of food, He still make sure to have a healthy body. 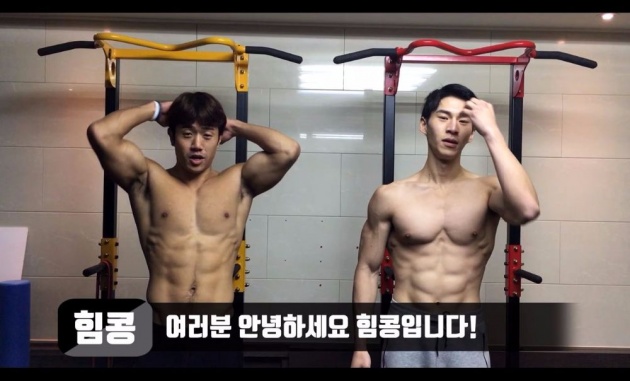 Banzz, who has to eat a staggering amount of food for mukbang, was revealed to be 177cm (~5'9") tall and weigh 70kg (~154lbs). Banzz was said to dedicate 6~10 hours just to exercise, composed of two sessions of 3~5 hour aerobics and 1~2 hours weightlifting.

I salute BJ Banzz for thinking his health despite of having the rich and luxury from Mukbang Shows. I wish he may inspires all other Mukbang Stars to exercise and maintain their healthy body to prevent complications in the future. Nevertheless, Happy eating ♥

Annyeonghaseyo! (Hello!) Korean culture has been very widespread and massive since Korean Pop or "K-…

Humans are curious by nature. And now that we are at the golden age of the internet, the digital wor…

Atchara vs Kimchi: Which One Wins?

So let's say you aren't able to eat any vegetables but you bought some Kimchi and Atchara, whichwoul…