Representations of the Unknown

Everything about this world that I don't know about, is everything I want to know! and I am sure you do too! I am inspired by the unknown, and many aspects of my work reflects this.

Ok so here’s where my inspiration comes from…”The Unknown” What is actually going on up there, a trillion light-years away? I am dying to know, there has to be something, surely? Are we not the standing evidence of that?  Our ancient ancestors have left us a painted pictorial world of evidence that we either chose to ignore, or simply do not fully understand.

In this blog I am going to talk about a few visual representations from ancient history that no scientist or archeologist has ever found a factual, certain reason for, just an assumption or a theory, is all that has been proposed so far.

I know what I believe, so what do you think…..

The Pyramids at Giza. (there is no way I can leave this bad boy out!) 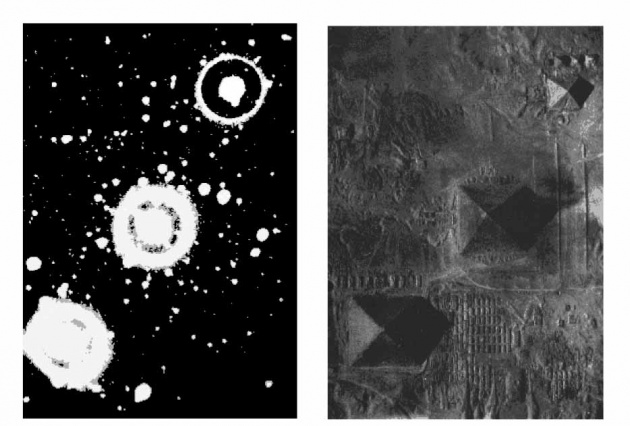 The evidence is apparent, but the meaning is unknown of the great pyramids of Giza, in Egypt, they provide many assumptions and speculations as to why they were built. A spectacular artistic achievement, estimated to have taken two decades to create. The building of these pyramids is such a considerably difficult challenge for a civilization of ancient times, even today large machinery would be needed and sophisticated cutting tools to do such a job.  This raises the question of why these beautiful architectural monuments were created.  Maybe the Egyptians were assisted with higher forms of technology, or it could be that another unknown civilization built this amazing phenomenon, a civilization, perhaps not from this world?

It is a wonder as to why the Egyptians erected the Giza pyramids in such a way, or if it even was the Egyptians that built them in the first place.  Orion’s belt (above.left) Pyramids (above.right), spot the difference? Yes one is a picture from out of space, and one is a set of pyramids, but it is obvious they are connected, right? Notice the three stars on the top right hand corner (left image) and the three smaller pyramids on the top right hand corner (right image), even these smaller pyramids are in the correct alignment. This provides a visual state of evidence, showing that it is possible that these pyramids were created specifically to match Orion’s belt, or it could simply be a coincidence, Hmmmmm. 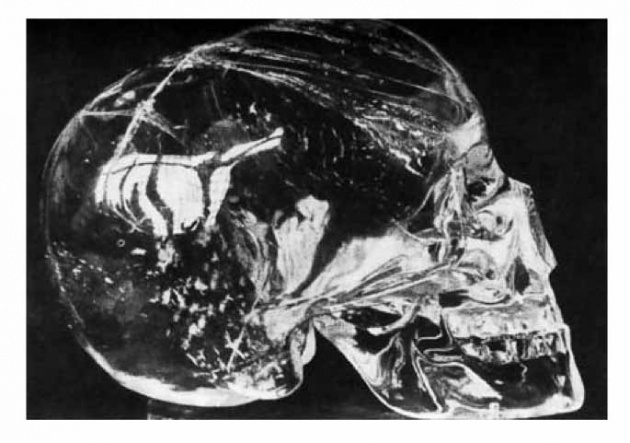 Found in 1924 in Belize, Central America by Fredrick Mitchell-Hedges and his adopted daughter Anna Mitchell-Hedges.  The skull is curiously made from pure electronic quartz crystal.  No one knows why it was made or what its purpose was/is.

This magnificent artifact holds a wonderful mystery.  Whoever carved it, had a very determined approach to fulfill the exact mimic of a human skull.  There are seven discovered skulls, four of which are owned privately (I wonder who by).

Mythology of Crystal skulls states that there is in actual fact thirteen crystal skulls, and once united together they will produce a significant change in the world,  “Legend suggests that there are twelve additional worlds out there, planets which are inhabited by intelligent species”  (Giorgio. A Tsoukalos). Giorgio also states that in mythology each skull has a link, a connection which provides all the knowledge of these worlds: “They also suggest that these thirteen crystal skulls that allegedly exist on planet earth were each brought here from one of those twelve planets, and the thirteenth skull is the one that apparently contains all of the information of all of those twelve different worlds.”  Have been placed here? rather than carved and created here? 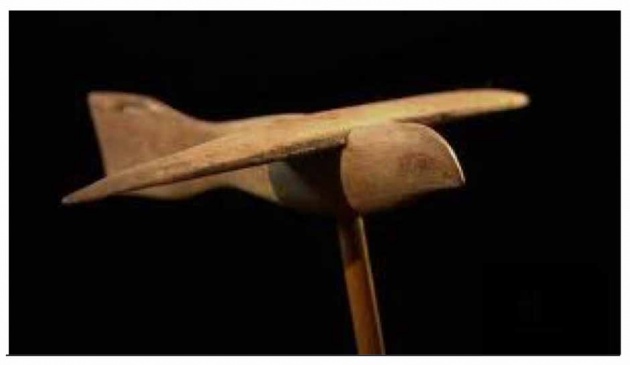 Found in 1891 in an ancient tomb in the city of the dead, Saqqara. Egypt.  Amongst various items found in the tomb, the Saqqara bird carved from wood creates much astonishing evidence of ancient flying machines. The shape of the Saqqara bird went un-noticed until 1969, when an Egyptologist examined the model artifact of the Saqqara bird and proposed that it is in fact not the carving of any average typical bird. Dr. Uwe Apel an aerospace engineer suggests the theory that the Saqqara bird has not got ordinary wings of a bird.

“Its interesting because, on one hand clearly it should look like a bird because it has eyes, and it has a typical nose of a bird, on the other hand the wings are clearly not bird wings, and the other point is birds have no rudders, because a bird does not need a rudder because of its aerodynamic architecture, and so there is the idea they are not representing birds, but flying machines or aircraft,”

The Tomb of Kukulkan 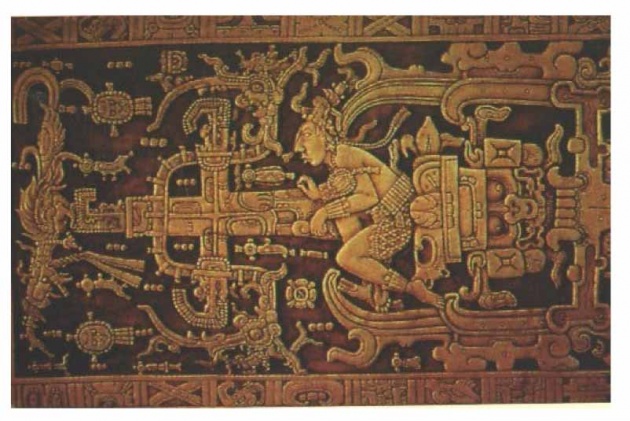 Not just figurines are connected with ancient flying machines, but there are also carvings found with similar influence.  For example under the temple of the god Kukulkan at Palenque in Mexico, a large tombstone carving was discovered.  Erich Von Daniken describes the carving as representing that of an extraterrestrial machine, he deciphers the tombstone with a technical view:

“Altogether the tombstone forms a frame in the middle of which a being is sitting and leaning forwards (like an astronaut in his command module).  This strange being wears a helmet from which twin tubes run backwards. In front of his nose is an oxygen apparatus.  The figure is manipulating some kind of controls with both hands.”

Dated back to 100 BC the Palenque tombstone proposes much mysteries notions of alien technology, or at least that of technology that potentially patronizes our own technology of today.

I don’t know about you, but if our ancients were driving around in machines like this, then shouldn’t we be able to fly about with our own personal rocket by now?! Or is it even a human who's driving it? 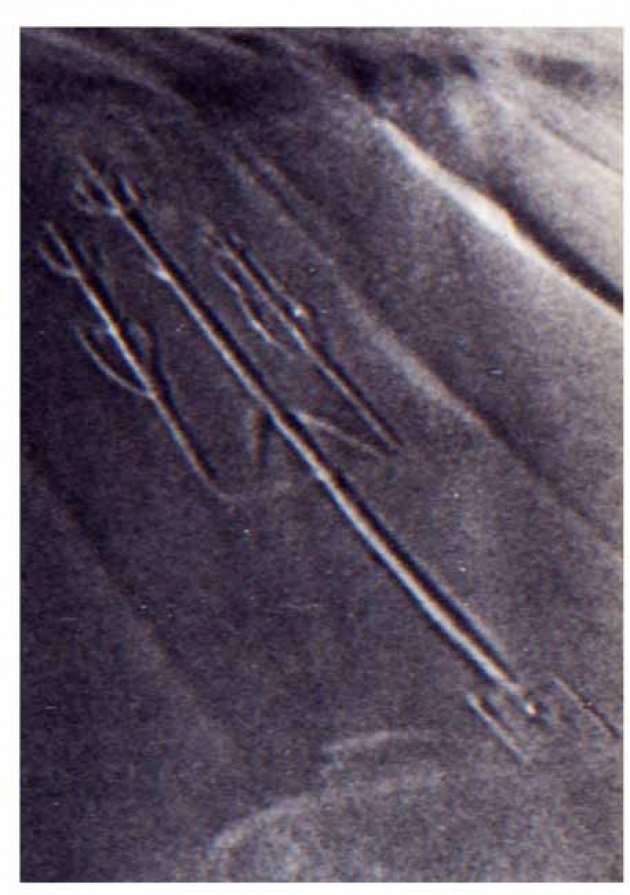 Erich Von Daniken has a very interesting opinion on such signs and symbols that can only be appreciated from the air.   Erich Von Daniken describes this huge scar on the ground of Nazca as a left behind track from a god or an extraterrestrial. Von Daniken writes: “The gods had been there and left traces behind! In the hope that the heavenly messengers would return they began to draw new lines and deepen the old ones. That is how the lines at Nazca originated, in my opinion.” The gods aka The aliens perhaps?

This is just a slice of the thousands of visual representations from unknown.

The majority of humanity today, do not give these ancient visual monuments, findings and artworks the attention that does them justice, and we do not appear to give these ancient civilizations credit for their spectacular wonders of artwork.  But we do know that there are hidden links to unearth in ancient art, many of which will remain a mystery, at least for now.

Thank you for reading my blog, I hope to god (or to the aliens) that I didn't bore you :) x