The National Shrine of Padre Pio: A Pilgrimage

Faith is not the clinging of the shrine but an endless pilgrimage of the heart."--Abraham Joshue Heschel 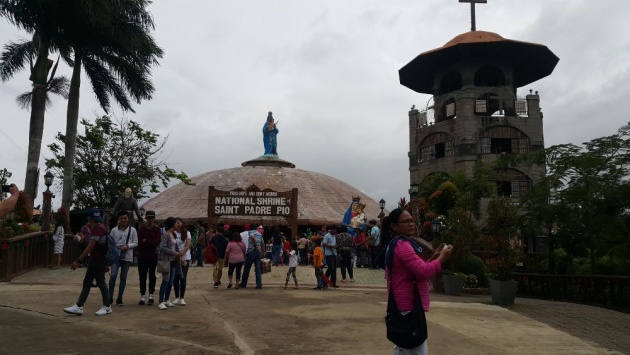 If last 2016's travel was meant for the history of the country, 2017 was meant to do more on pilgrimage.

When I was planning on the December travel and its itinerary, doing a pilgrimage to Padre Pio Shrine came first to my mind since I have read a lot of great thing about the place. And I wanted the schedule in visiting the National Shrine to fall for Sunday for we wanted to attend the mass.

From Marian Orchard in Balete, Batangas, we went straight to Sto.Tomas, Batangas where the Shrine can be found. It took us less than two hours to get there due to traffic, difficulty with navigation and not to mention we were riding a bus. Still, it is worth the travel when we reached the place and it was just in time for the 10:30 morning mass. But before reaching to the place, since we were new, I have to asked around where is the Divine Mercy Sanctuary for the scheduled mass will be held there, but then, before I could say my first question, we heard over the speaker that the mass will be starting soon and we just followed where the voice came from. 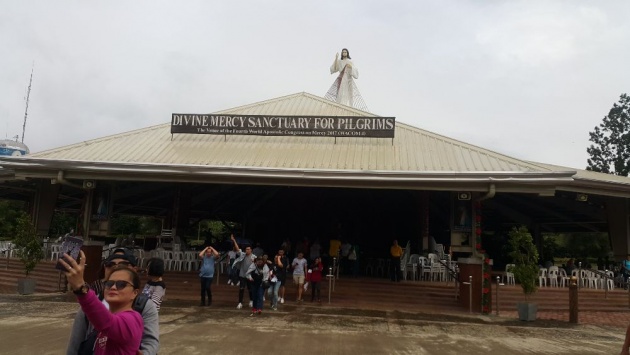 The Divine Mercy Sanctuary outside

The Mass that I have attended after few months was in the National Shrine in Padre Pio. I admit, I haven't gone to the church for so long where my siblings have noticed since I was the religious type, who don't want to miss any Sunday mass. I just don't know what had happened to me. And while I was attending the mass, I felt like I just renewed my faith. It made me realized what I have been to and what I have been missing. Since the mass we attended was Advent Sunday, the priest that time made a good sermon that it is "realistic", that I can not help not to agree with everything he had said. And I pondered.

The Mass lasted for an hour but I felt short, maybe because I haven't gone into one for a long time and after the mass, faithfuls are gathered together to have the last blessing from him, including religious items that are being bought and brought inside the shrine. 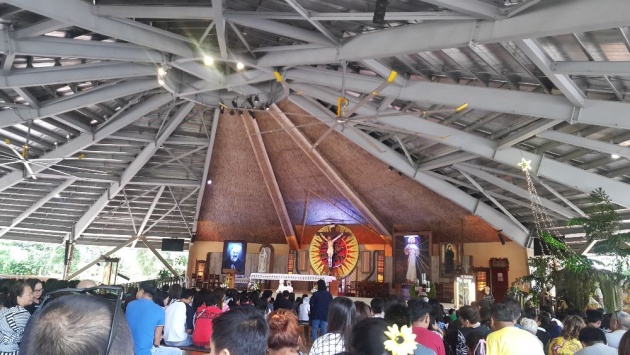 *Image is credited to Rain tajon via ww.bitlanders.com

About the National Shrine of Padre Pio and Its Structures.

The Shrine is located in the municipality of Sto. Tomas, in the the Province of Batangas. It is designated as National Shrine by the CBCP of the Catholic Bishop Conference of the Philippines, the first in the province. The Padre Pio Parish and Shrine was established with the vision to build a sanctuary to have Jesus Christ as its center. And the whole place is standing in 1.6 hectare of land that is being donated by the Gonzaga family. So, the whole place is really big even if there are a lot of faithfuls and pilgrims.

The groundbreaking of the Shrine took place in the year 2006 by the Archbishop of Lipa, meaning to say that the place is quite new but it has been a famous place to visit while in the province of Batangas. The place was big that it has a lot of structures where faithfuls--local and foreign can see and say their prayers. The shrine has the main Church, which has this "salakot" (a traditional hat worn by farmers and fishermen with the thought of God's protection to us) shaped roof and on top of it stands the Our Lady of Mercy. 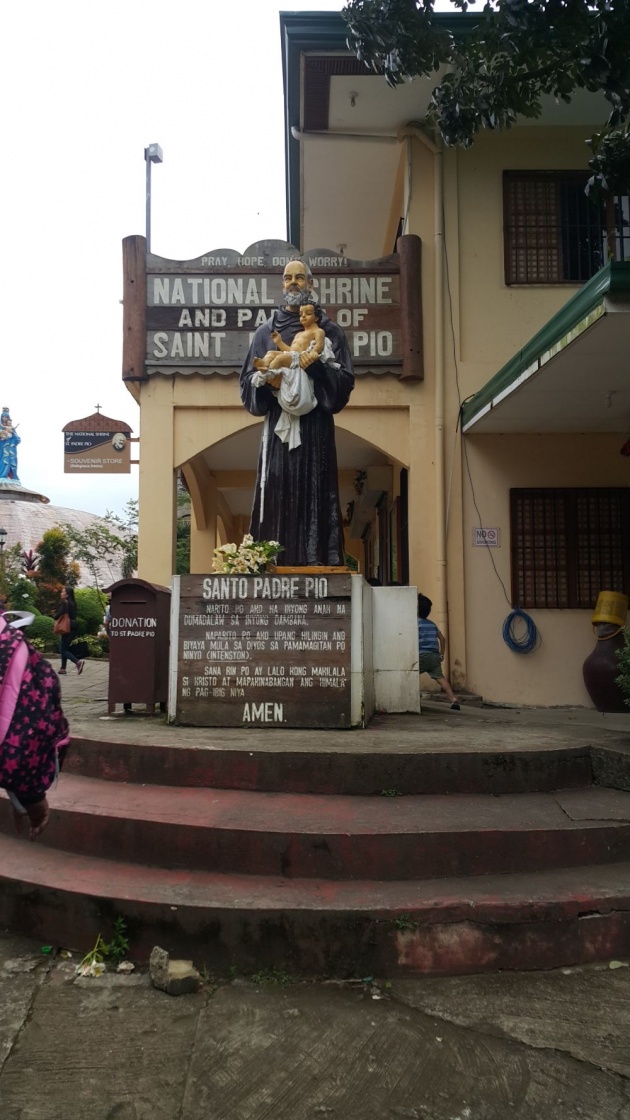 On the left side of the Main Church is the Divine Mercy Sanctuary where we attended the mass at that time. Before you get into those two important sacred places, you have to climb up and it was one steepy climb. The Shrine also has a Holy Water Sanctuary, where you can get Holy Water, as the priest said after the mass, if we haven't being sprinkled with the holy water he sprayed, we should check the sanctuary and we can even get more of it. 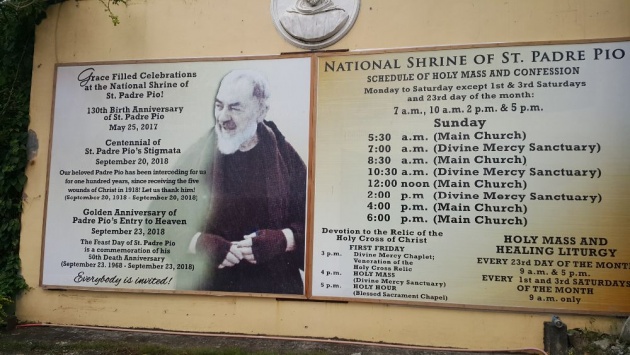 The schedule of masses

What else to see in the National Shrine.

I noticed a lot of structures inside the shrine, aside from the wide parking area that can accommodate a lot of vehicles. It has a Fountain of Hope, where you can say your prayers too and it is located behind the main church and near to it are prayer locks. The Chapel of St. Padre Pio Relic;, Mary, Mother of Mercy Belfry that is beside the main church; Holy door of Mercy chapel where you can see confession rooms that are name after different saints.

Aside from those, there is a place where you can buy souvenir items, both religious and snacks and there is even a restaurant but that around 100 meters away from the Shrines and chapels. But as we walk for more, since we get into the shrine on the back side, we check what is in the the front. Near the welcoming arc is where we bought a lot of pastries and breads, that I am very regretful that I didn't buy that much since they are so tasty. By the way, while I was buying, I saw an ambulance on stand by near the gate, maybe in case of emergency and I am said to myself, the Shrine wanted everyone to be safe. 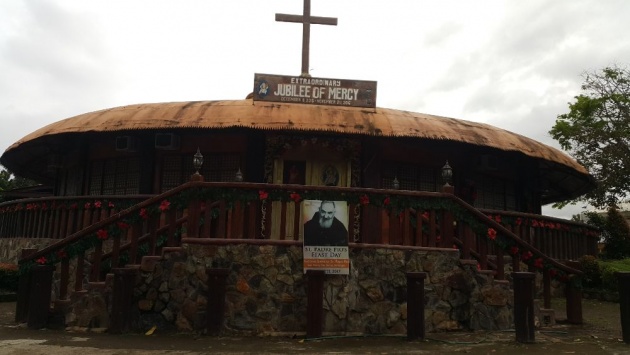 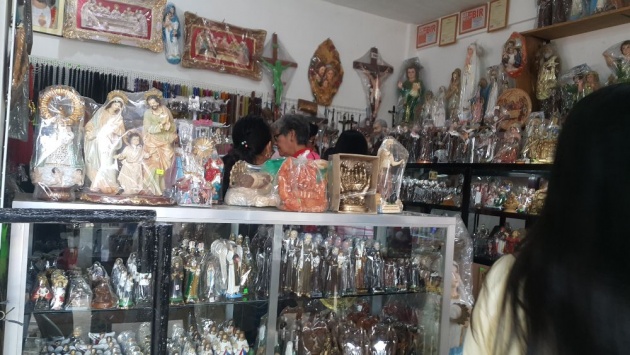 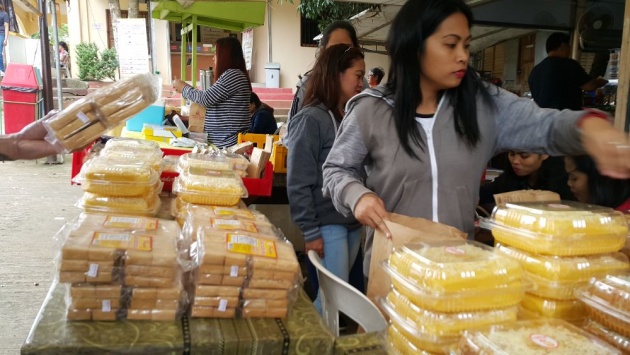 The pastry shops in front. 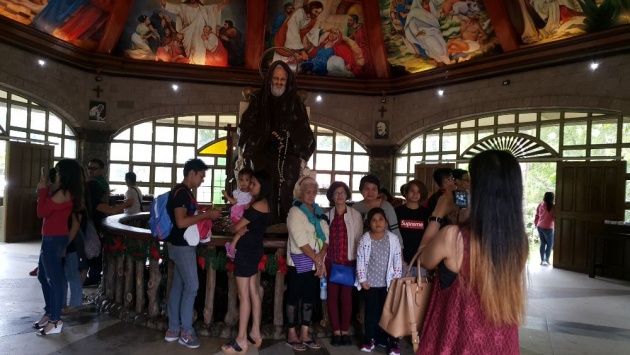 Personal thoughts with the Pilgrimage.

The National Shrine of Padre Pio pilgrimage was a very warming experience for me. Despite the fact that the weather is not that good, well, it was not bad either, I felt like I have missed a lot as a Catholic. The mass was attended by many but it was solemn and who needed a fan? The place is very open, but then you can still focus with the mass. You can also roam around not worrying anything.

With the whole experience going there and attending the mass, I asked my brother if we can go there and do pilgrimage. I wanted my whole family to experience what I have experience. And to what I have prayed, I know God will always grant them, in the best time He knew. 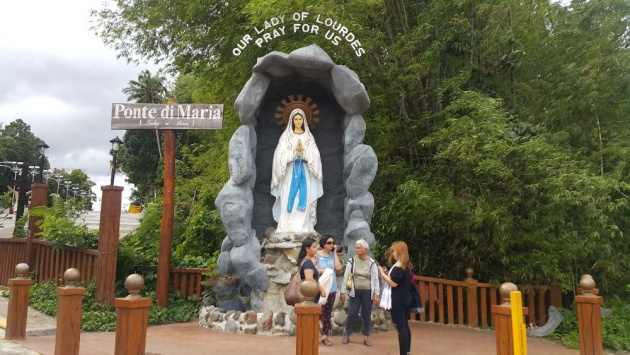 The Our Lady of Lourdes Statue

Padre Pio, please pray for us!

Life is a pilgrimage. Each moment should be lived in depth, because each moment contains God, hidden…

Planning our second trip away this year.

Not all those who wander are lost."--J.R.R. Tolkien *Image is credited to Rain Tajon via www.bitla…

Film Review: Manakamana – eight and a half minutes of a goat’s backside? Are we there yet?

You wait for one film to consist entirely of single takes and two come along at once. After Stations…

Everyone has his ideal Personality with whom he identifies himself. Such personality inspires him an…