The soldiers Afganistan war articles have left out 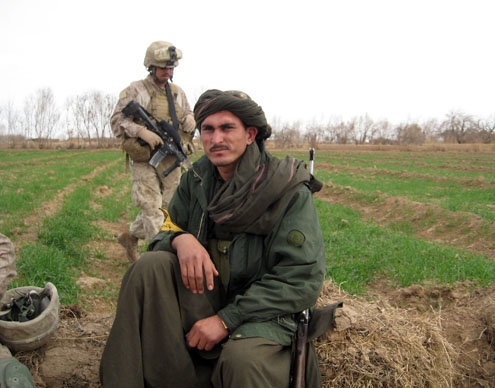 I was inspired to write this from a comment left on my blog Education system of Afghanistan is for doers, not thinkers.  The comment stated that building schools in Afghanistan would have to wait untill law and order came first, which is understandable if we were building universities and private schools for example. To make things simple I've fought with weapons to destroy an enemy that seemingly cannot be beaten with just weapons. Being a warrior is also being to able to be disiplined on the battle field mentally as well as being able to succeed in phyisical combat.  I've noticed its going to take more than phyical fighting to destroy the Taliban.

Along side of the ANP (Afghan National Police) and ANA (Afghan National Army) were also the ISCI, the local militia. Their uniforms were a yellow arm band most of them wore around their bicep and some wrapped around their AK-47's. Marjah Afghanistan was a place where if you were not Taliban, or working for the Taliban your life was in danger. When the Marines returned to their patrol bases, and ANA and ANP went home the ISCI built fortresses out of thier homes and fought from them to protect and keep the Taliban from coming into their villages. Without receiving payment for their dedication to Taliban extermination I used to wonder why fight?

They fight for nothing more than their freedom. As we pushed the Taliban farther and farther away from Marjah alongside with the ISCI I always took notice in the children were now coming outside to play, women would be seen walking from compound to compound it was close to being the most free some of these Afghans have ever been.

What the Taliban fears most is losing the people. From my experience when the Taliban know the locals do not want them there and will fight them, they do not come. Of course there are times when the Taliban will overtake a village or family, but not the ones who fight.

My point is this, I saw it as we teamed up with the ISCI and pushed out the Taliban from an extremely hostile section and gave a school that we took from the Taliban during a clearing operation to them to hold for themselves. They gaurded that school with everything they had.  The people of Aghanistan are ready to protect and fight for their own.  With Filmannex putting in the work to help Afghanistan build schools and educate the people of Afghanistan I stand by my idea firmly as in education will destroy the Taliban for good.

Waiting for law and order to us seems the right and civil way to do things but what about the Afghans who deserve all the same opportunities we do?  Helping Afghanistan is going to have to be an aggressive movement with actions being taken, along with ideas being presented to improve instead of the waiting game. I'm proud to continue serving the less fortunate working with (G.I.V.E.), Francesco Rulli, and hopefully soon Roya Mahboob in the rebuilding and advancement of Afghanistan. I've never been one to be patient.