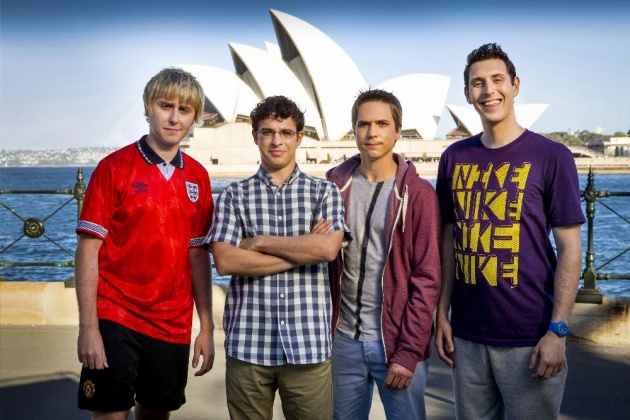 You don’t go to THE INBETWEENERS 2 for expertly wrought drama. You go for the comedy of male humiliation. I often point out to people that British films put women first. The men, James Bond aside, are a bit crap - weak, uncertain, insensitive failures. There is a reason J K Rowling did not write about Harry Potter as a man – he would probably prang his owl in the driveway.

Films about male embarrassment make us Brits feel better about our poor performance in the field. That one Test victory against India in Southampton doesn’t wash away the miserable last twelve months of English cricket. As for the exploits of our national football team – no, don’t, please.

Many readers of this review will not be from the once proud United Kingdom. Instead, if they have read this far, they will be asking themselves, ‘who are the Inbetweeners?’ They are the title characters of a moderately popular Channel Four (British television) comedy series, so-called because they were neither children (too dirty-minded) nor men (too pathetic) but somewhere in between. The TV series finished when the four characters, Will (Simon Bird), Jay (James Buckley), Simon (Joe Thomas) and Neil (Blake Morrison) left school. What is a sit-com without its principal location of Rudge Hill Comprehensive? Answer: not a sit-com. The series inspired an insanely popular spin-off movie, released in 2011, whose £45 million gross inspired this sequel.

Filmmakers will like to tell you that they returned to the subject of their biggest hit because their characters still had a compelling story that needed to be told. The credits of THE INBETWEENERS 2 tell you why this one was made – all the principals are producers. They may never shake off their iconic roles, but if you’re going to end up inebriated and bitter, they may as well acquire enough cash to fuel their break-down. This is not to say that Messrs Bird, Buckley, Thomas and Morrison are untalented, but audiences in the UK are intolerant of British sit-com stars trying to show their different side. You never saw Richard O’Sullivan, Reg Varney or Ronnie Barker doing RICHARD III; they’d stop every fourteen minutes for the theme tune and a commercial break.

What distinguishes one IB from another? Will is the bespectacled, gap-toothed narrator, a bit of a mummy’s boy scarred by his parents’ break up. He projects an air of being above his clique but his own inadequacies – not knowing who he is, only what he isn’t – send him crashing down. Jay is The Mouth. He could talk a haemorrhoid into a bowel cavity. He boasts of his legendary exploits but behind a talent for creative sexist description lies a quivering sensitive soul who just wants to be loved. Surprisingly, he has a driving license. Simon is the moderately normal one. He can get a girlfriend but generally – in the movie sequel – only moody, needy types, the sort who can’t decide between shampoo and conditioner and get really stroppy about it. There is a running joke that Simon’s girlfriend is so possessive that she cuts the hoods of his hoodies. Morris and Beesley could have moved on after one telling. Instead they flog this joke with every implement at their disposal. Simon really ought to dump her; instead he becomes engaged. Neil is the gormless one who has entered the world of work. He takes everything literally. He appears to have learning difficulties but I’m sure Morris and Beesley would strenuously deny they are ridiculing the mentally ill. They are making fun of everyone.

So to the plot. In the months since the last movie, Will has gone to Bristol University and is desperate to impress Neil and Simon with his new found popularity. It doesn’t exist. He is humiliated in the opening minutes – I won’t spoil it – and has his furniture tied to the ceiling. I can’t remember where I saw this joke before – perhaps DIE VETTEN JAHRE SIND VORBEI (or THE EDUKATORS to give it its English title) – but I like to think Morris and Beesley haven’t consciously ripped off a film released in the UK by their principal backer, Channel Four. They just didn’t do their hausaufgaben.  Will’s life is crud, and probably some ruder words. So he is secretly pleased to hear that in his gap year Jay is living large in Australia. Jay is, by his own unreliable account, a successful DJ in a happening nightclub and lives in a spectacular mansion where his every sexual need, and some he didn’t have, is tended to. (That joke actually isn’t in the movie, but I included because – you guessed it – I didn’t want to spoil the ones that are.) At the risk of dramatically increasing his student debt, Will joins Simon and Neil in their attempt to track down their improbably successful friend, where they discover that he talks a lot of... Jay’s motivation becomes apparent pretty quickly, so the four of them trying to make his dream come true and also satisfy Neil’s new-found desire to be a dolphin tamer.

By enormous coincidence Will meets his Kate (literally), one of his former primary school classmates who is backpacking and selling tours to get by. Will wants to follow her and see what happens – a royal wedding or just a Chicken Royale.

All of this takes second place to the bad taste humour, which reaches its nadir at a water park; not so much THE WAY, WAY BACK as ‘way, way gross’. If you don’t laugh at this bit, well, you must have had your inner chuckle clipped with your umbilical cord.

I am not going to pretend that THE INBETWEENERS 2 is anything other than puerile, infantile filth, with no desire to go beyond the jokes to say something really meaningful about the youth of today. If there is an excuse to parade one’s genitalia for a laugh, then it is done. If there is a dog that is attracted by said genitalia, bring it on. Quite apart from the upside down furniture, there is a sense of déjà vu about some of the jokes, or would be if the characters spoke French, Will ridiculing the wearers of friendship bracelets and dreadlocks. The problem with sit-com characters is that you cannot give them a novel trajectory. THE TO DO LIST has an equal amount of gross out humour but it starts from a novel point, a character wanting to learn sex to maximise her first meaningful experience. You can’t argue with creative timidity that earned £45 million. You just can’t warm to its sequel.  THE INBETWEENERS 2 delivers what you expect, but also makes you keenly aware of its shortcomings in a way that doesn’t result in you leaving the cinema on a high.