Being from Canada, I am very fortunate that we have a lot of arts funding sources in the way of arts grants and government funding.  But to apply to these funds, filmmakers must know how to write a thorough and concise proposal that includes a well thought out treatment. Writing treatments is one of the most important aspects to filmmaking especially when it comes to making documentaries and animations. Sure a storyboard and script are handy too but a treatment is really the first steps to fully conceptualizing the film you are going to make. Story and technical treatments really help filmmakers work out their ideas and thoughts before even tackling a script or storyboard. As well, a documentary usually doesn’t have script or storyboard so a story treatment is the best way to help funders understand the proposed project and describe your vision during this development phase.

I wrote my first treatment in 2000 when I was creating my short animated film, The Horror of Kindergarten.  Since then, I’ve probably written over 20 successful and unsuccessful treatments. Even though my first treatment was for a student film and I wasn’t trying to use it to pitch funders (considering I was the funding source), I still had to reflect what I was proposing to my professors, classmates, and most importantly myself.  I actually went through at least 4 or 5 drafts of the treatment before I felt comfortable to tackle the storyboards. Each new draft included revisions based on the constructive criticism I received my classmates after I presented it in class.

Since animation is a very involved and lengthy process, I found a treatment was a great way for me to express my artistic vision, story, and stylistic approach.  Also, it was a good way to help conceptualize the animation techniques, influences, and ideas behind the film.  Although, I have to admit, after the third draft of my student grad film, almost two months into pre-production, I almost ditched the entire project and started fresh on a new concept.  Luckily, better heads prevailed and I continued to work the kinks out of my original story idea and seven months later, I finally finished the film.

Since that first treatment, I’ve written many more treatments for a multitude of projects from short animations, feature documentaries, animation and documentary series, etc.  All treatments were aimed and geared at trying to get funding from broadcasters, arts council grants, distributors, investors, etc.  I normally write a longer and more detailed treatment for grant proposals but for the one/two sheet I give to broadcasters I will summarize the treatment/synopsis. The treatment is usually condensed for the one sheet because it must fit all on one or two pages.  Since broadcasters have hundreds of proposals to read through, it's important to keep it short since it gives you a better chance of having it read. After the condensed treatment is finished, it goes to the designer for polishing to add some graphics, etc.   Here’s an example of what one looked like for a documentary series I was pitching a few years ago. (Sorry I had to blur out the text for privacy reasons but you can get a sense of the layout) 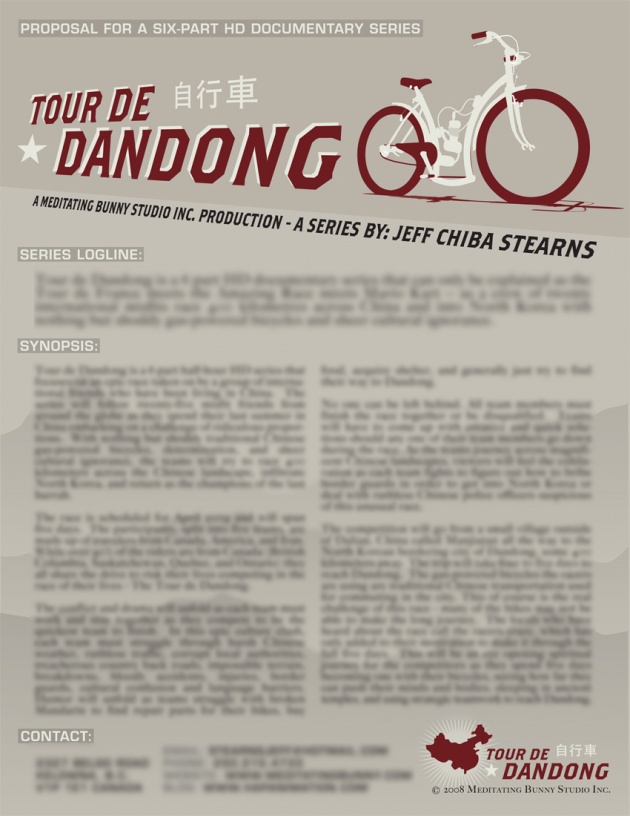 When I start writing a proposal, I usually try to start with a synopsis for the project. Basically a synopsis is a description I write as if the film has already been made.  It generally describes what the film is about.  For the treatment you are trying to sell the idea of the film to someone who is going to help fund the film in order to make it a reality.  Therefore, it is important to be clear, concise and to the point.  Try to avoid repetition and keep the ideas simple since your ideas will likely change and shift a bit when you move into production.

When I write a proposal, these are things you should have prepared:

A logline is a sentence that summarizes the entire film.  This is easy to conceive if you think about only having one sentence to tell someone what your film is about. This will normally include the theme of the film.  For example, here is a logline for my latest short animated film Yellow Sticky Notes | Canadian Anijam:

For the first time in Canadian history, 15 of Canada’s most award-winning and celebrated independent animators have come together to create a collaborative animated film using only 4x6 inch yellow sticky notes, a black pen and animation meditation.

For the synopsis, it’s important to keep it to one or two paragraphs and for the treatment to be anywhere from three to seven paragraphs.  Depending on the length of the project, short film or feature film, will also depend on how much detail you may want to go into.  A feature film can require more detail but the art of writing the treatment is to keep it concise and include as much important info as possible.

Also keep in mind that some grant applications or funding sources require a particular order for categories or ask for specific info. Always read the rules and regulations before applying for anything. I’ve sat on a few film grant juries and when you’re reading hundreds of grants, small things start to bother you. So always have someone else proofread your proposal before you submit and keep it relatively short. This is a classic example of less is more. When you’re reading hundreds of grants, having a repetitious and drawn out treatment can get annoying fast, which sometimes means it probably won’t get funding.  Also, I really recommend that if you get the chance to adjudicate grants at some point, do it! You'll learn so much from reading other people’s proposals and it helps you immensely with your own proposal and treatment writing abilities. After reading other filmmakers' grant proposals, you learn what works and what doesn’t work really fast.

When you have other people proofread your proposal/treatment ask them if there are any areas that were unclear to them or parts they didn’t understand.  If they discover mistakes or find something too vague, don’t take it personally, but take this opportunity to be more clear or direct in your description of the project.  Also, when I read a treatment, I should be sold in the first paragraph…or even the first sentence…I should feel compelled and excited to keep reading.  If you don’t hook the person reading the treatment in the first paragraph, make that first paragraph more appealing and engaging until it does.  Also, don’t forget to include your contact details at the end just in case you nail that treatment and someone wants to give you the money to get it done! Just remember, I’ve only had a handful of successful treatments that have gotten made…the secret to having good ideas is to have many ideas.  Write lots, read lots, and believe in everything you do!  Good luck and happy writing!

Please subscribe for updates on new blog postings about filmmaking tips and advice and check out the trailer for my upcoming short animation, Yellow Sticky Notes | Canadian Anijam. Thanks!