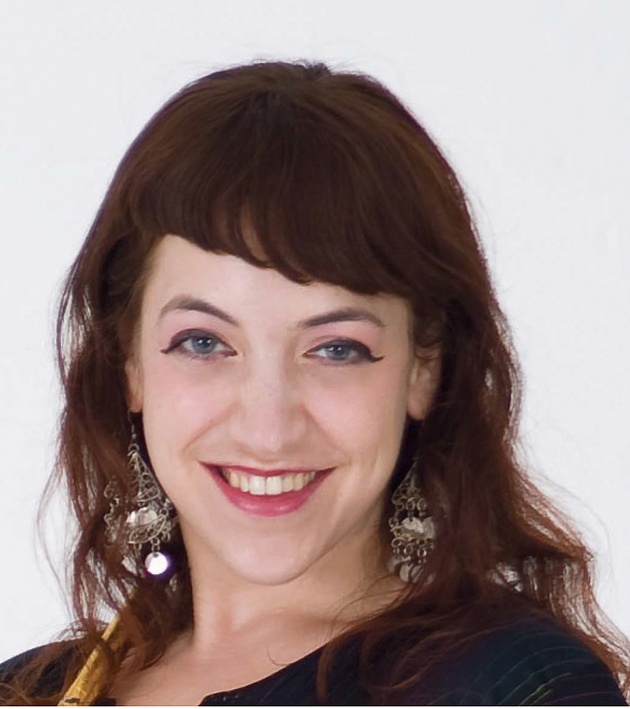 Leela Corman studied painting, printmaking and illustration at Massachusetts College of Art. Below is an interview of her on the concept of superheroes for Afghanistan's schools.

LC: I'm an illustrator, cartoonist, and dancer. I grew up in New York City and now live in Gainesville, Florida, where my husband runs Sequential Artists Workshop and I draw and teach illustration and bellydance.

FA:  Who inspires you for your art? Do you use your art to deliver a specific message? If yes, what is it?

LC: Inspiration is a vast ocean. Sometimes you don't realize who or what your influences are. At other times, you do, but those influences may not be visible in the finished work. I am very influenced and inspired by Archie Comics (especially Dan DeCarlo), the films of Pedro Almodovar and Fatih Akin, midcentury modern design and illustration, musicians Brian Eno, Neko Case, Rowland S. Howard, and Einsturzende Neubauten, the writer & radio performer Joe Frank, novelist Isaac Bashevis Singer, and most especially the art movements of the early 20th century, particularly the Bauhaus and the Dadaists, and very much the Neue Sachlichkeit painters of Weimar Germany - Otto Dix, Christian Schad, George Grosz, Max Beckmann etc. As far as comics, my biggest inspirations/influences are the Hernandez Brothers, Lynda Barry, RAW Comics, and countless French bandes dessinées. In dance, my biggest influences are black & white Egyptian movies from the 1940's and 50's, the great choreographer Mahmoud Reda, and my love for music. In all of my life and work I am very influenced by the knowledge that human cultures have always mixed with one another, that national borders are a fiction. 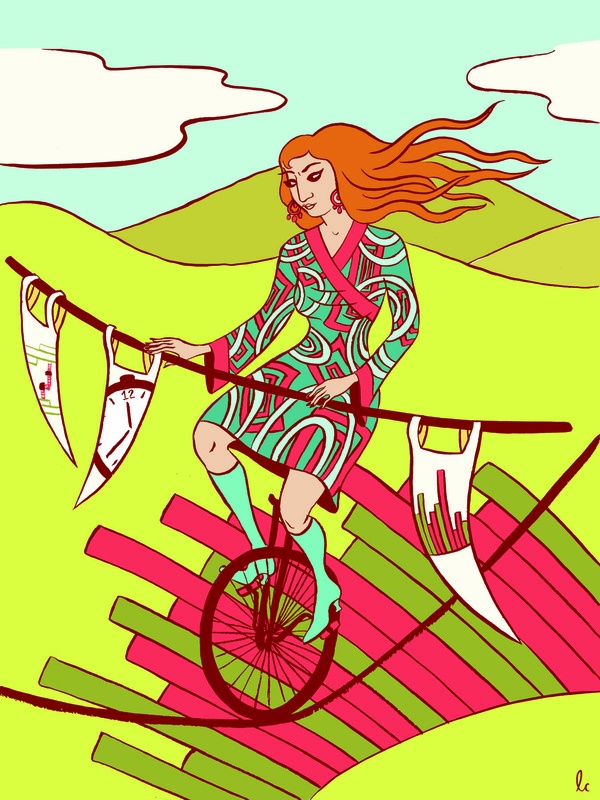 If there are messages in my work, they're specific to the work in question. In Unterzakhn, I started out wanting to talk about the gruesome results of restricting women's reproductive choices. But I am not a polemicist, I am a humanist, so my work tends to be about the messy realities of being a human.

FA: Have you ever dreamed of superheroes in your childhood? What does your superhero look like?

LC: When I was a kid, I had fantasies about being a warrior woman. This is kind of ridiculous, since I was growing up in an apartment in Manhattan, but there you have it. Now I want to rebuild my physical strength, after two children and a major trauma, so my current idea of a superhero is a woman with really big muscles. I've also started to get interested in the women who worked in factories and flew planes during WW2, here in the US and elsewhere. The iconography at the time presented women as capable, strong, with huge biceps and steely, focused eyes, wearing pants. As soon as the war was over, women were depicted as dainty, girdle-wearing little flowers, thrilled by stoves and sponge mops. The realities of women's lives are far more complex.

But I should say, I really don't like superhero comics. I never have.

FA: How do you think Afghan kids could create their own superheroes, as they didn't grow up with any?

LC: That is an excellent question. I think that in order to have a good answer to that, I would have to know so much more about Afghan culture. A superhero is an idealized figure that reflects whatever the culture values. So what qualities are valued in Afghanistan, such an ancient culture with so much amazing history? It seems to me that Afghan people are much tougher and stronger than Americans. I think that you could answer that question better than I could. What would you say are the ideals and deepest values of Afghan people? 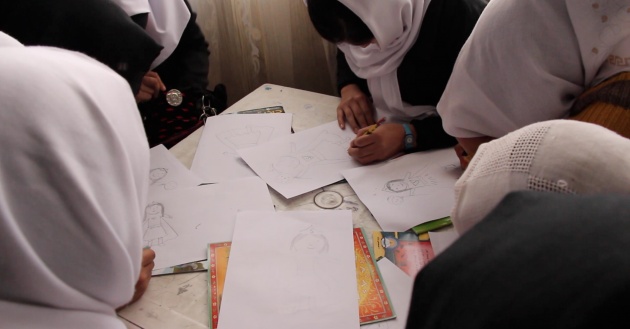 Afghan Girls are drawing their superheroes

FA: What do you think of superheroes as role models for young students and children in developing countries? How can they use the concept of superhero to share their ideas and connect with the world?

LC: That's another excellent question. Just last night I was talking to a friend whose 4-year-old daughter loves superheroes, but is continually disappointed that 1) there are so rarely any good female characters and 2) that whenever there are female characters, they usually need to be rescued by the male characters. So clearly, kids want superhero figures and respond deeply to them, and girls know when they're being marginalized and talked down to. But again, because I didn't grow up reading superhero comics, I'm not sure what their uses are for kids. Here in the US, superhero comics are written for middle-aged men, for the most part. That said, I think that kids in developing countries, like kids everywhere, have a keen sense of fairness. A good superhero that they'd respond to might be one who stands for justice and protection for the weak and vulnerable. While we're fantasizing here, I personally would want to see a superhero who can disarm drone bombers, neutralize nuclear weapons, clean up pollution, and protect women and girls from those who would stand in their way. And I would want that superhero to be female. As you can see, I'm an idealist.

How will you give us the answer of your superhero and its role for the students at school?