Bones - The Murder of the Meninist 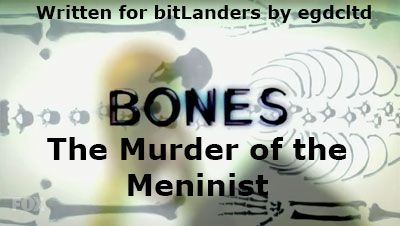 "The Murder of the Meninist" is episode twelve of season eleven of Bones, the forensic drama television series loosely based on the novels and life of anthropologist Kathy Reichs. In this episode, a men's rights activist is found murdered and Hodgins struggles to deal with his paralysis.

Brennan and Booth are in the diner and he is saying that it's worse than he thought. Brennan, who thinks Booth is talking about a case, offers to help. Booth mentions that she's been watching the Flyers games with him recently, and they have lost the last six games. The only conclusion that Booth can draw from this is Brennan is bad luck. Brennan does not believe in luck.

Angela and Hodgins arrive and are asked how Hodgins' physical therapy is going. Angela says that Hodgins hasn't done any in over a week. It seems that Hodgins has admitted that he hid the truth from Angela when he told her everything was going fine. At the end of the previous episode, "The Death in the Defense", his doctor told Hodgins his nerves aren't regenerating, and that his paralysis will be permanent.

Hodgins Himself isn't Doing So Well

No, I have plenty feeling: anger, rage, eh, biting sarcasm. Though, I'm not sure that last one is a feeling or just a really pissy attitude

There is no neural connectivity at all and Brennan asks Hodgins if he doesn't feel anything. He replies that he has plenty of feelings; anger, rage and really biting sarcasm. Although he's uncertain whether that last is a feeling or a really pissy attitude. Brennan confirms that it's an attitude. Hodgins tries to wheel up to the table, but hits it, knocking over a drink. Brennan and Booth suggest going elsewhere, somewhere that's more wheelchair friendly, but Hodgins will have none of it. Then Brennan gets a message about a body found inside a burned out car and says that they are all going to have to leave. 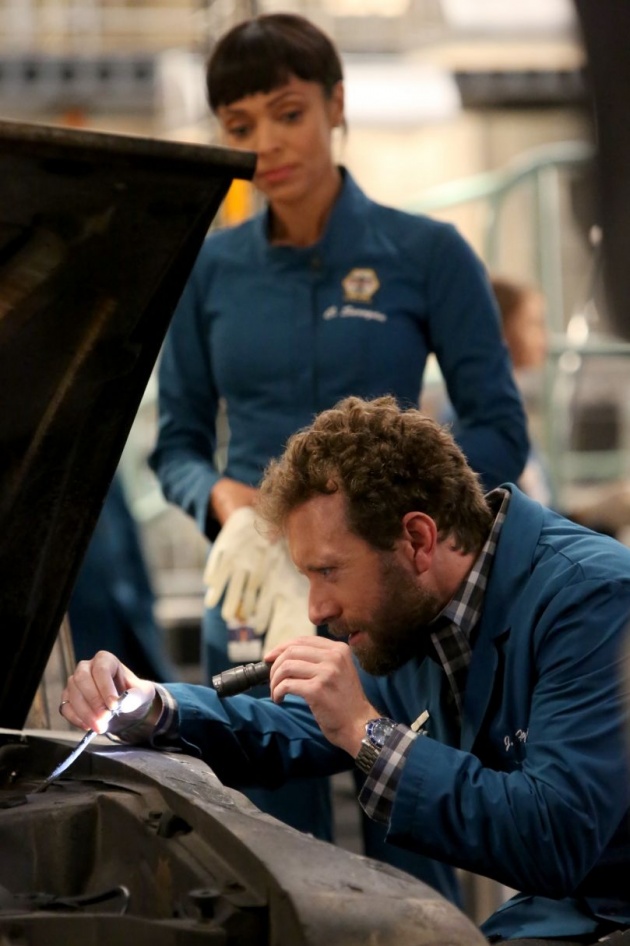 Supposedly a Run of the Mill Car Crash

At the Jeffersonian, Cam and Dr Fuentes are examining the body, what little there is of it. The car the body was in went through a guard rail and caught fire. They don't have much to work with, but they've solved murders with less. However, this isn't a murder but a run of the mill car crash supposedly. Which would make this a very short episode. Hodgins comments that the man must have been poor, because the car was a piece of crap even before the accident. The VIN number has been burnt away but Hodgins spots a new carburettor and Angela suggests that this could help Booth track down the owner. Which gets a rather snippy response from Hodgins. Hodgins, who is struggling to reach the carburettor from his wheelchair, is asked if he wants a hand. He responds that he'd like a new pair of legs.

Aubrey is interviewing the woman who sold the victim the carburettor. She's a little too excited when she sees Aubrey's gun. She tells him that the customer came in all the time and always paid cash. He didn't dress poor either. She says he was the rudest customer ever, and always talked down to her because she was a girl. Before she leaves, she wants, and takes, a selfie with Aubrey, to prove that she's been to the FBI.

The Victim Died Before the Crash

At the lab, Hodgins is looking at people using the stairs. The platform is also up stairs, and he finally gives in and uses the wheelchair life. Dr Fuentes comments to Cam about a head injury which suggests that the victim hit the top of his head on the steering wheel when it went through the guard rail, suggesting he wasn't conscious. Not only was he not conscious, he was already dead. So, a murder investigation after all. That could be seen coming.

Who knows? The world is full of messed up people. I should know, I'm one of them.

The victim had a combined phone and wallet holder, although they've been melted together. Angela cuts the fused plastic mess open with a laser she borrowed from Hodgins and extracts a credit card chip, IDing the victim as a Emil Bradford. 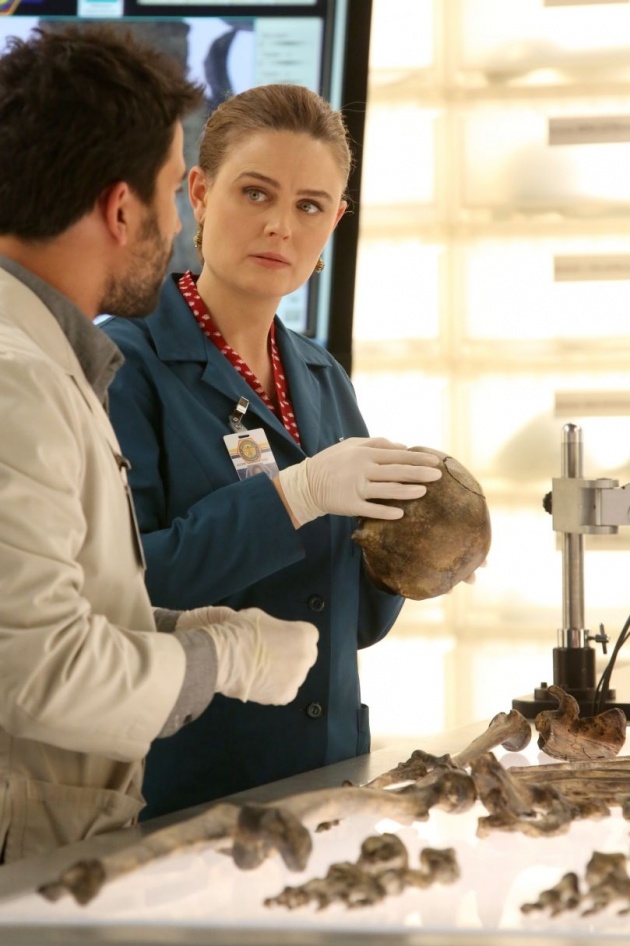 The Victim Was Subjected to Domestic Violence in the Past

Bradford shows evidence of a number of blows to the face, which corresponded to a number of ER visits six years ago. Which was when he was getting divorced. Cam suggests domestic violence as an option, and Rudolfo points out that the victim is a man. Cam tells him that men can be the victims of domestic abuse as well and, as Fuentes response shows, can be too ashamed to report it, given cultural mores. 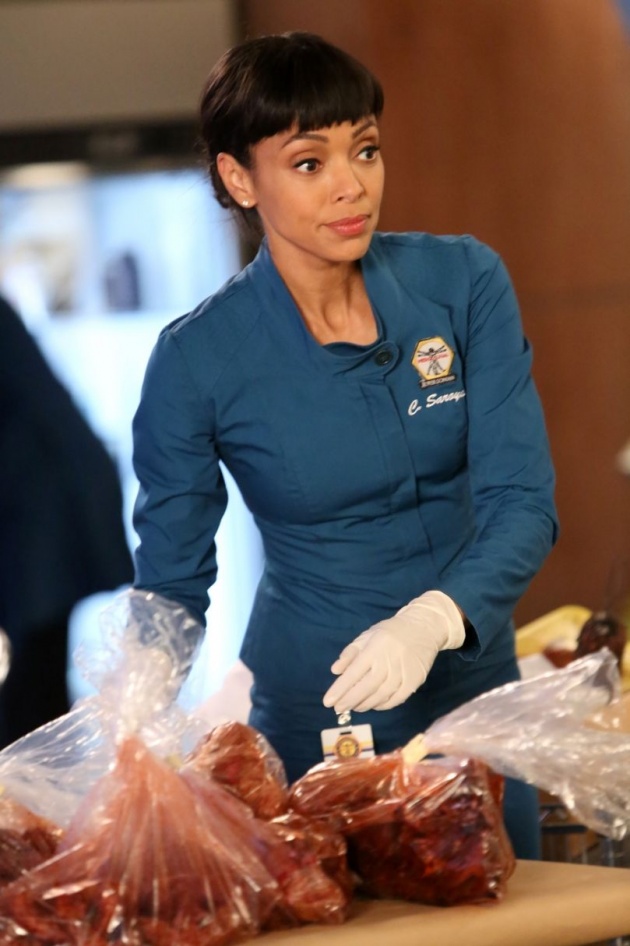 Cam is Doing an Experiment; Hodgins is Not Interested

Cam brings in a whole bunch of animal parts into the lab and tells Hodgins that some information he gave her, that the car essentially turned into a convection oven, will be useful for her project. She's conducting an experiment; something Cam never does. Hodgins asks if she's going to construct a pound for pound sausage replica of the victim and the answer is yes. She asks Hodgins if he wants to help - after all, he and Zack did something similar with Spam in "The Titan on the Tracks" and Cam did not appreciate it - but he's not interested.

The Ex-Wife is Unpleasant

Bradford's ex-wife doesn't have a good opinion of him, and objected to the fact that he was trying to reduce the $10K per month in alimony she was being paid. She doesn't seem like a terribly nice person. She says that all of Emil's efforts and time went into Men Now, the men's rights group he started. Both Brennan and Aubrey are surprised to find that's an actual thing.

Cam and Angela are browsing the manosphere and discover how many men identify themselves as meninists. And Cam comments about how the list of oppressed people apparently includes middle aged white men. One video Bradford had recorded talks about how the secret plan of some women is to actually get rid of the male species. 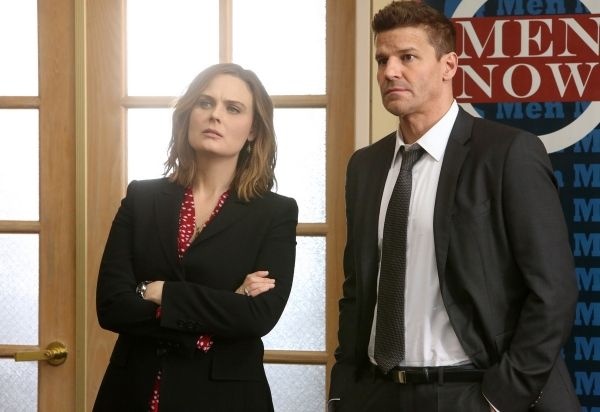 I really want to punch this guy.

At Men Now, Brennan and Booth are surprised to find the door answered by a woman. However, her husband, Paul, and Bradford cofounded the group. Brennan and Booth, before speaking to Paul, watch him giving a presentation to a group of potential members. Booth - who wants to punch the guy - finds Paul far more offensive than Brennan does - until Paul says something really bad. 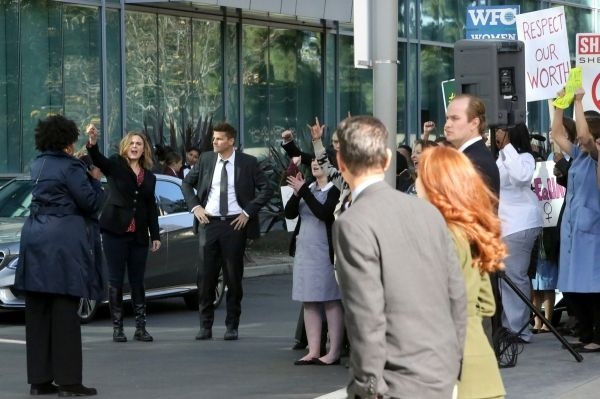 Too Expensive to Drive Nice Cars

Both Paul and Emil were driving junkers because it was too expensive to drive nice cars given how many times they got things smashed on them. Paul also points Booth towards a group - that Brennan is a member of - whose leader had made very threatening comments online aimed at Bradford.

Too Far in the Opposite Direction?

Whether or not Bradford had a point - and given his probable relationship with his ex and how she comes across, he definitely looks to have had a reason - he appears to have gone a little too far in the opposite direction.

Aubrey brings Booth some doughnuts - well, quite a lot of doughnuts - for comfort eating given the recent Flyers' losing streak. Aubrey suggest Brennan is a jinx, and that Booth should stop her watching. He doesn't want to tell her she can't watch Flyers games, nor put hockey before her.

Hodgins is Not in a Good Place

Hodgins is not dealing remotely well with his injury now, which perhaps is quite understandable, and is being rude and abrupt with Angela, to the extent where even Brennan - who is not exactly known for her tact - noticed, and isn't appreciating people trying to help.

Bones - The Murder of the Meninist Trailer