Bones - The Doom in the Boom 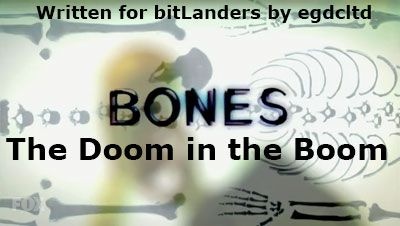 "The Doom in the Boom" is episode ten of season eleven of Bones, the forensic drama television series loosely based on the novels and life of anthropologist Kathy Reichs, and the midseason finale. In this episode, a corpse at a crime scene contained a bomb that was detonated to take out the police.

A Body at a Crime Scene

The episode opens at night and a sports car screeches to a stop near to where two teenage boys are standing by a body and a man with a video camera gets out. The man asks if they are the ones who called the body in to the police, and they say that he isn't the police. The man is a news stringer who videotapes crime scenes for a living. The boys ask what he gets for this, and he says maybe $300-400. The boys say that they should get the money, as they are the ones who found the body, then the police do turn up.

Brennan and Booth are at home and Brennan is cooking. Booth says that there's been a body found at Columbia Heights. Brennan asks if Booth is skipping date night. He says no, he doesn't want to miss the 'whore sauce.' Brennan wishes he wouldn't call the sauce that, it's puttanesca. Which she had told Booth means 'in the style of a whore,' something she now regrets. Booth is going to let Aubrey handle the case. Angela arrives and says that Hodgins has also been called to the scene. Brennan wants to know if Angela has had any luck in talking Hodgins into having another child yet. She says no, and is worried that Michael Vincent might get lonely. Booth tells her not to worry, he's seen how big Michael Vincent's entourage at the park is and Brennan tells her that children who spend a lot of time by themselves develop a good imagination. 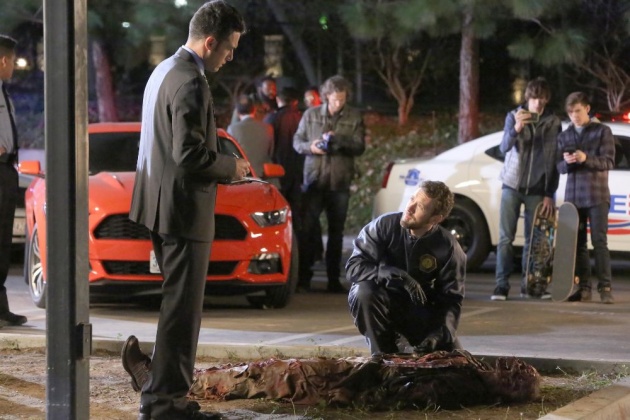 At the scene, Cam and Hodgins are at the body and Aubrey is getting the spectators to move back. Scavengers have eaten through the victim's face but Cam says that the victim is a male in his mid to late 40s. Hodgins says that there's something not right beneath the shirt, as if the corpse is sucking in its gut. Opening up the shirt reveals a lot of maggots and Cam steps away to call the lab. Hodgins says that the maggots indicate the victim has been dead for two days, but where the body is is a high traffic area and there's no way it would have remained unnoticed for that long. 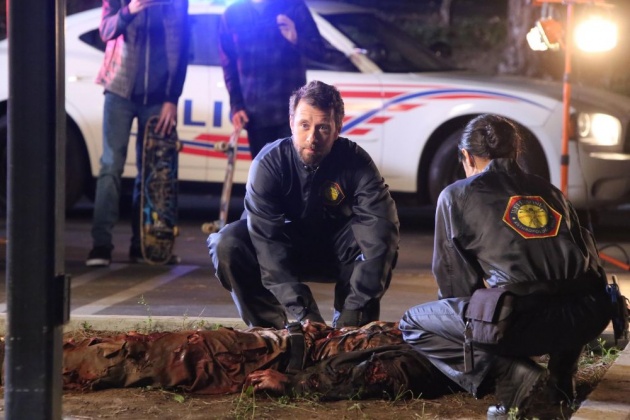 A Phone Rings and the Body Explodes

Aubrey says that whoever killed the victim wanted the body to be found. Then a mobile phone rings, and it's one on the body. When Hodgins gets it, he comments that there is a wire attached to it. Aubrey realises what this means and dives for Hodgins, pulling him away from the corpse and sheltering him as the body explodes. Cam turns around and she is the only one left standing.

Four Cops Are Dead, Hodgins is Injured and Aubrey is in Surgery

Booth, Brennan and Angela arrive at the hospital and Cam says that four cops were killed at the scene and she doesn't know what state Aubrey and Hodgins are in. Then Hodgins limps out, a bit battered. He says that Aubrey is being taken into surgery and it doesn't look good. This is followed by an extensive surgery scene as shrapnel is removed from Aubrey's body.

Brennan is Concerned About Booth's Reaction

Angela wants to go home but Hodgins says that they can't, not whilst the killer is still out there. Booth takes over the case and the bodies of the four dead cops are sent to the lab. Brennan is concerned that Booth might take it the same way as when Sweets was killed in "The Conspiracy in the Corpse". Booth says that his guilt over Sweets' death is what caused him to start gambling again, but it won't happen this time. 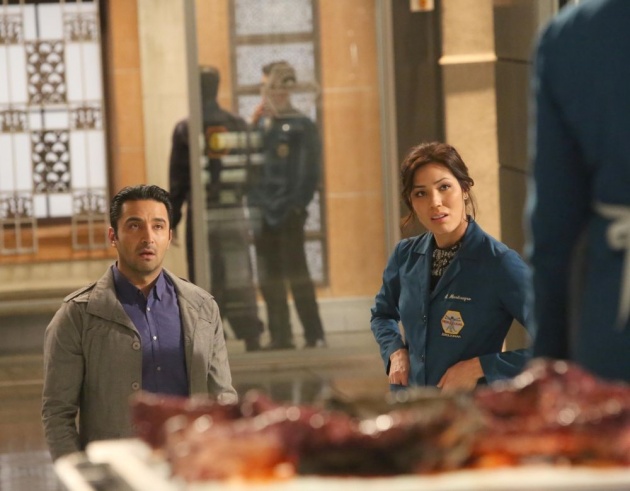 The Killer Used the Victim's Ribcage for Shrapnel

At the lab, Cam says that the bomb was placed inside the victim's ribcage. Brennan says that's for efficiency; the killer wanted to use the ribs as shrapnel. Then Arastoo turns up; he hasn't been seen since "The Brother in the Basement". He says he came as quickly as he could. This is a bit awkward for Cam, given that she is now dating someone else. Brennan says that Dr Vaziri can stay, as she forget to call in an intern. Cam replies that surely Arastoo wouldn't want to be an intern again - he is a doctor now, after all - so Brennan says he can be a consultant. Arastoo quickly spots the victim has an artificial knee. 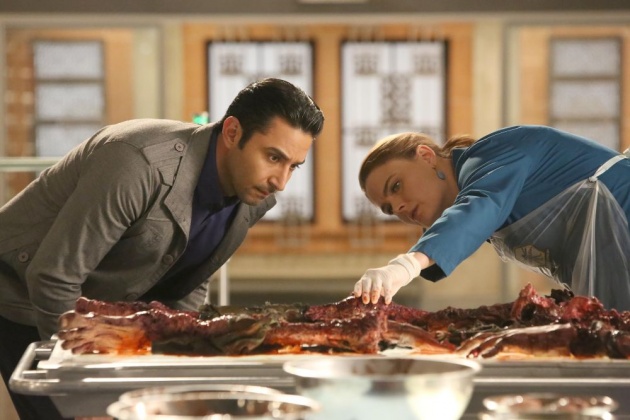 The First Victim Was a Cop

Caroline enters Booth's office and he tells her that Aubrey has been in surgery for three hours. Which doesn't look good. The victim has been identified; he was a DCPD officer. Caroline is going to call in a favour and her a behavioural analyst to help out.

The victim had asbestos on him, but none in his lungs, which meant he was exposed after he was dead. So his body was definitely moved. A woman who seems a bit scatterbrained arrives in Booth's office; she's Karen Delfs, the behavioural analyst. She says that killing a cop isn't easy, and requires planning and organisation, and the fact that the victim was a DCPD officer isn't random. Which Booth tells her he already knew.

The victim's lieutenant is in the gang unit and he says that they had been trying to crack down on an El Salvadorian gang called La Serpiente with no luck. So they had started getting them on minor violations such as speeding and jaywalking. The dead officer had pulled over the head of the gang for a broken tail light and found an unregistered gun in the car. Which was the boss' third strike, so he has gone away.

The Gang Leader was Probably Set Up

The boss' lieutenant, Julian Molina, says his boss is a smart man, not one to leave an unregistered gun in his car, subtly indicating that he set him up so he could take over the gang. Which he makes out gives him no motive to kill the officer.

Are Cops Being Targeted?

The dead man was killed at close range by a small calibre bullet to the head. Which sounds as if it could be a gang killing, but Hodgins says that the explosive was a pipe bomb, about as basic as you can get and not what would be expected from a sophisticated gang. So, who killed the officer and why? They look to have something against cops in general.

There's a bit of a cliff-hanger ending leading into the next episode, "The Death in the Defense".

Bones - The Doom in the Boom Trailer