Below is an example of a treatment for my short film KYLE found here. This is the treatment I used to present my idea back in 2010!

Stacey is walking home from school one afternoon when she is followed and pestered by Kyle, a school dropout with high ambitions on his mind. At first reluctant to acknowledge Kyle’s’ presence, Stacey soon becomes intrigued in the unusual ways of Kyle and his dreamy expectations of life….

Stacey is a young girl walking home from school.

In her hand she clutches a leaflet advertising a singing contest for 16-19 year olds - She scrunches it up and tosses it over her shoulder.

As she continues to walk home she strolls past Kyle, a school dropout who believes in taking education into his own passionate hands.

He tags along, doing his best to ignite a conversation and secure a date with a girl. Stacey is pissed off to say the least but this doesn’t change Kyle’s persistence as he drags her towards some horses and shows her a bonding technique he ‘read about once’…Stacey is surprisingly intrigued and this motivates her to find out more about Kyle, leading to a series of questions that reveal him to be a bit of a loner.

They walk towards a picturesque lake and Stacey gets comfortable on the grass while Kyle skips stones and reveals more of his odd nature. Stacey begins to open up about her mothers’ affair while Kyle lightens the mood with his own story of his dad’s infidelity with the local vet. The two enjoy a mutual laugh and both lie on the grass facing the clouds.

Kyle begins to speak of his ambitions of being a pilot and owning his own house, bar and pretty girlfriend…he asks Stacey what she wants to do and she replies, “Fuck all”. He pities her bad attitude and decides to show Stacey that a bit of love for life can make changes.

He picks her up against her will and tosses her into the shallow water. Stacey is infuriated but she soon breaks down in fits of laughter when Kyle voluntarily jumps in after her. They scream, play-fight and breathe life.

The pair eventually make their way home approaching a fork in the path where they must divide. They share an intimate hug and Kyle heads on his way. He stops in his tracks however claiming he’s forgot something. He walks back up to Stacey and hands her a scrunched up leaflet. It’s the one she tossed earlier; he makes a simple statement that doing ‘nothing’ with her life is a ‘drag’.

Stacey has a subtle change of general life attitude and asks Kyle to walk her home the next day.

Following on from my last film I’d like to continue with the idea of British Grit and Social Realism. I’m a fan of the styles of Shane Meadows, Lynne Ramsey, Andrea Arnold and directors’ a-like.

I love the freedom of camera movement and the use of improvisation to deliver a naturalistic and realistic film an audience can identify with.

To differ from my previous film however, it will be less ‘grey’. I want to create the feeling of escapism through picturesque scenery and hopefully good weather!

As I have identified in my previous film, I have a huge passion and interest in developing characters and expanding on the ways in which they bounce off each other. It goes without saying that we are both shaped as individuals by the people we interact with and the choices we make in life. This is a natural curiosity I like to project in my work.

In Stacey’s case she is missing drive, motivation and self-belief – In order for my film to work she needs to bounce off a character that fulfills this aspect of her. The ending of the film will be achieved when Stacey find these traits within herself.

Stacey seems like your regular school girl who at least gets 1 detention a week, can never be bothered with homework, isn’t massively popular and can knock out any boy or girl who dares cross her path. Under this rugged exterior however, is a person of insecurity and despondency. Stacey is convinced her path in life has already been pre-planned and she will end up following the routes of her family… stuck in a dead-end job until she starts a family of her own and so on and so forth…

This attitude towards her future knocks any form of passion or go-getting and she regularly brushes off opportunities that could potentially turn her life around.

Kyle is the symbol of hope and passion and he fulfills this missing part in Stacey. As stated before I think it’s amazing how people generally fulfill part of themselves with the traits of other people. In Kyle’s case he clearly lacks a listener or someone who will at least accept him for his unusual ways and it is Stacey’s curiosity and intrigue, which fulfills this missing part of him. As a result, these two characters are able to bond and connect in a special and unique way.

Kyle is a daydreamer. A young lad with high and possibly unrealistic ambitions, that keeps him going throughout each day. He has dropped out of school as he feels they are unable to teach him the things he really wants to learn and now takes it upon himself to pursue his own interests. Because of his unusual ways, Kyle is considered to be a bit of a loner – He lacks any real friends or individuals that he can share his passion and dreams with. Despite this, his glass is always half full and unrealistic or not, he won’t stop daydreaming about a wonderfully bright future.

Essentially my film has the themes od escapism. It’s quite magical in terms of the bond between Stacey and Kyle and I wanted it to happen in a place which could reflect this theme a little. I came across this countryside lane surprisingly hidden at the back of Fenton and I really liked its detachment from the city. I thought this would be a great metaphor in representing the longing detachment that both Kyle and Stacey want from their lives but at the same time there is the burdening reminder that they have to face reality when the drudgery of city life can still be seen in the distance.

A pivotal point in the film is when Kyle tosses Stacey into a pool/lake. Not only is this symbolic for a fresh start but it also shows the unification of the two characters as they play fight and finally enjoy each other’s company

Music helped to drive emotion in my last film NOTICE and I would like to at least experiment with this further. However it would continue to be subtle as not to overtake the emotion delivered through performance.

I will be using a Canon 5d Mark 2 as the visuals have strong DOF and a filmic look– This will compensate the roughness of handheld visuals.

I will be editing on Final Cut Pro and experimenting with sound in pro-tools.

My personal goals for this film are to continue with my passion of creating and developing characters through their interaction with each other. NOTICE has motivated me to further practice skills/dialogue in scriptwriting and in particular directing – Something which I want to follow up in my long-term plan.

I am a huge fan of real British cinema. My belief is that the minimalist budget compared to that of blockbusters etc forces filmmakers to create films that are more creative, more identifiable and strongly performance based. I find myself much more attracted and drawn to British film characters purely because of the depths explored and the level of identification I have with them – This is something I want to take into practice.

Creating characters is a natural interest and I am keen to develop another production that will maintain my motivation throughout. I intend to push my comfort zones however by incorporating more logistical challenges such as animals, water scenes and test of pacing.

This is a typed up copy of a treatment I produced for KYLE whilst studying filmmaking at Staffordshire University.

I can remember always getting confused between a ‘treatment’ and a ‘proposal’ and I’ve never forgot what was said in response.

And that’s what I believe a treatment to be.

It's your whole understanding of your own idea and proof that you know what your aims are, you know how you want it to look, feel and how it’s going to communicate with your audience.  It’s them that you have to keep in mind at all times.

It also helps to think of the treatment as a written document that has to persuade the reader that your film is going to work, you've thought about all components thoroughly, you know what you’re doing, you’re organised, you’re motivated and you’re not simply just going to see what happens on the day.

Although it may not be customary – I think if you’re an independent filmmaker you should get your personality across in your treatment and start developing a personal style that will eventually become recognisable.

My points for a treatment would be-

-       Who are you characters and how well do you understand them?

I think the last point is an important one and will define you as a filmmaker.

Using imagery to get across a mood is also a valuable point…Filmmakers are visual and respond visually – The more juice can give them the better!

Below are three original extracts from my treatment for KYLE – It's look and feel was intended to represent the style of the film. 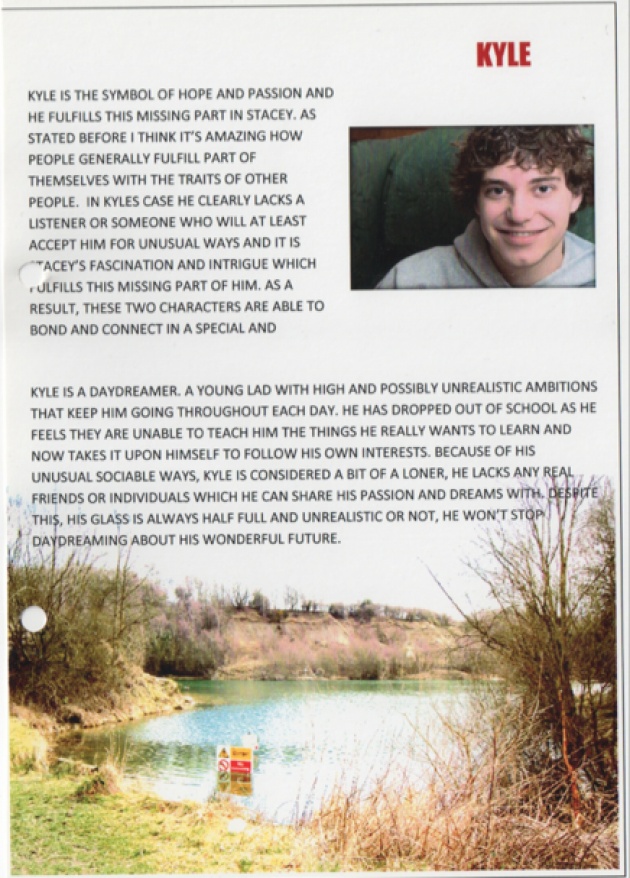 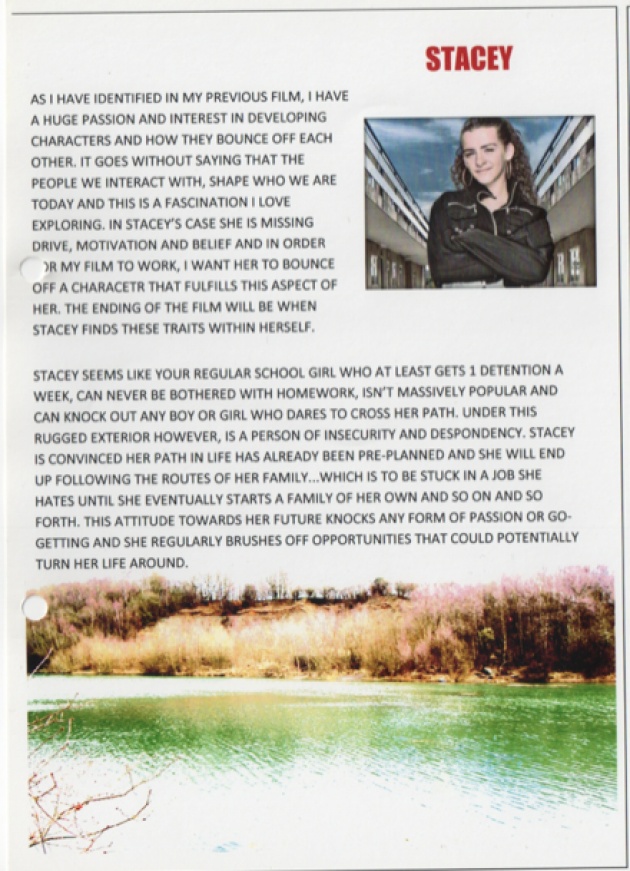 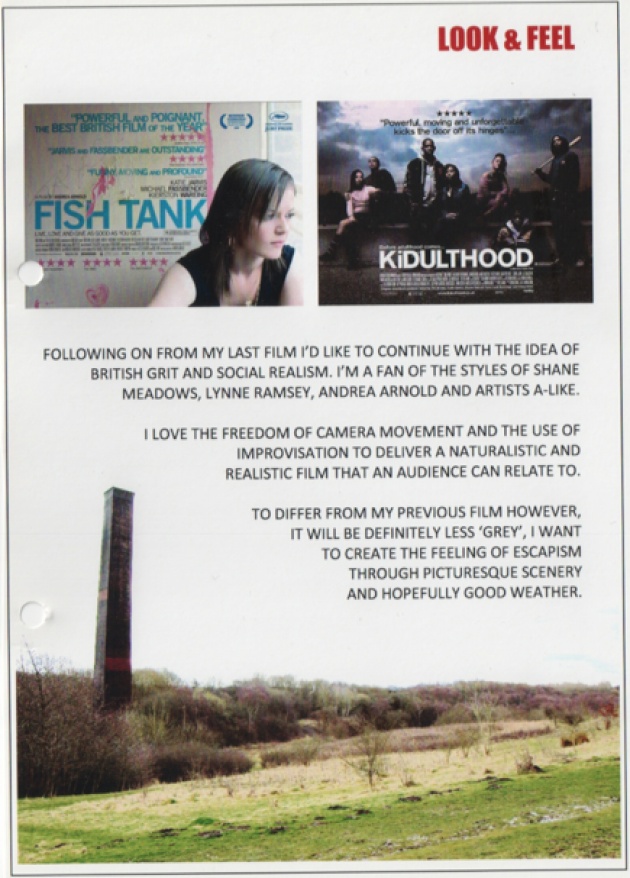 Treatments are a great way to get you thinking thoroughly about your film idea, it forces you to raise questions, challenge your concepts, understand your message and combat issues before they arise.