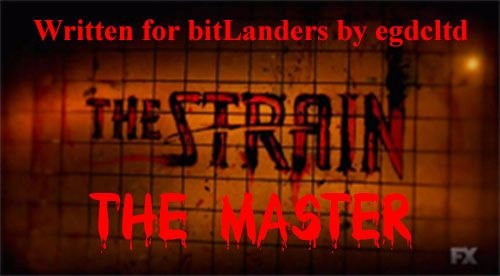 "The Master" is episode thirteen of season one of The Strain, a vampire horror series based on the novels by Guillermo del Toro and Chuck Hogan, and the season finale. In this episode, Eph and the others launch an attack on the Master.

In the previous episode, "Last Rites", Eichorst and other vampires had attacked Abraham's pawn shop. The first sign was when Nora's mother Mariela was attacked. Most of them managed to flee, but Nora had to chop off her mother's head. This episode opens with Eldritch Palmer arriving at the shop accompanied by Reggie. The Master had given Palmer some of his blood, bringing him back from what looked like the verge of death. Inside Abraham's basement, Palmer tells Reggie that he wants it all boxed up and brought back to his office. On seeing Mariela's headless body, Palmer does say that can stay. Evidently that is something Palmer doesn't want in his office. He tells Reggie to take special care with a particular valuable item - the heart of Abraham's wife, Miriam, which is in a glass jar. Palmer picks up a dagger, commenting that silver is quaint, and touches the edge. Nothing happens.

I'm Sorry, Did You Think You Were a Vampire?

Eichorst appears and asks Palmer how he is feeling. Eldritch nods at Reggie to leave, then tells Eichorst that he expected something more traumatic. He feels strong and energised, and there is no pain. Palmer wants to know when he will develop a stinger. Eichorst asks Eldritch if he thought he had been turned. No, the Master did not give him the worm. Palmer has health, but not immortality. Palmer is not happy to hear this. He asks how long this will last, but Eichorst claims not to know. Palmer complains that people are being turned all over town and yet he is on a waiting list. Eichorst says the others have been turned, yes - but not the way Palmer wants to be turned. That is a different matter. Eichorst tells Palmer he will serve at the Master's right hand for eternity - eventually. Think of this as another test. 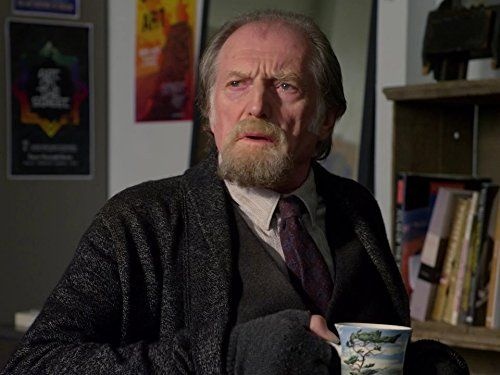 It's Zach's birthday and he's got a bike. His mother is filming him ride it when Zach hears what sounds like a couple of shots. He then jolts awake. Downstairs, Vasiliy, Eph and Abraham are sat around a table. They appear to be at Vasiliy's place. There is a map on the table and they are discussing why there were so many vampires at a certain location. Abraham says that without his coffin, the Master is vulnerable to daylight. Abraham had smashed up the coffin in "The Third Rail", a coffin that Abraham himself was seen to have built in "For Services Rendered". Eph says that there must have been 500 to 1,000 vampires and Abraham tells him they are security.

Going to Head to Tribeca

Eph says that whatever is above ground there must be important to the Master. It must be dark or protected. Abraham says probably both. Eph asks if Abraham just agreed with him and Vasiliy makes a sarcastic comment. Vasiliy suggests reconnaissance, that he and Eph head to Tribeca in daylight to take a look. Zach heard this and asks if they are planning to attack again. Abraham tells Zach they are; Eph does not appear entirely happy about Abraham telling his son this. Zach wants to know when they can go home. Eph tells him that they can never go back and that he needs to change. When Zach has gone, Eph makes his displeasure with Abraham clear. Abraham tells him that Zach needs to know the truth. Sheltering him will make it worse. Zach also needs to know what has happened to his mother. Eph does not want to tell Zach that at all. But Kelly will be hunting Zach, so he will probably find out one way or the other. 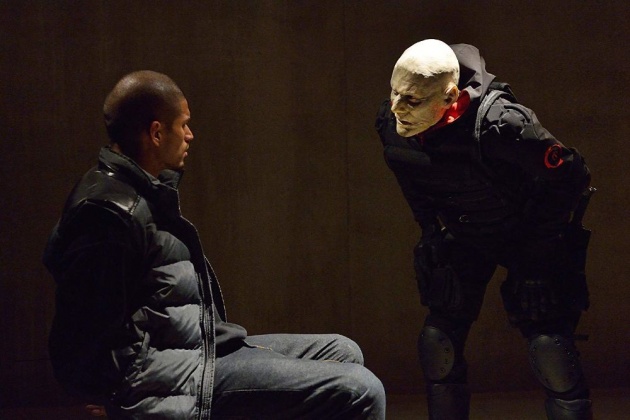 Gus is With a Vampire - But One Who Wants to Chat

In the previous episode, Gus had been getting guns and money from Alonso Cream at the docks when a man paid Alonso for a container that was being shipped out. So Gus decided to look inside - and it was full of vampires. The mysterious other party turned up and finished off the vampires before taking Gus away. He is currently hooded and tied to a chair and is heckling his captor about being scared to look at him. The hood is removed and his captor does the same. This other party who have been killing vampires definitely look to be vampires themselves. Gus asks the person if he is going to feed on him, to be told he wasn't brought down where it was safe simply to be drunk. Gus's bonds are cut and he tries attacking the other. Who easily knocks him to the ground and tells Gus that is a bad idea. Then to follow him. 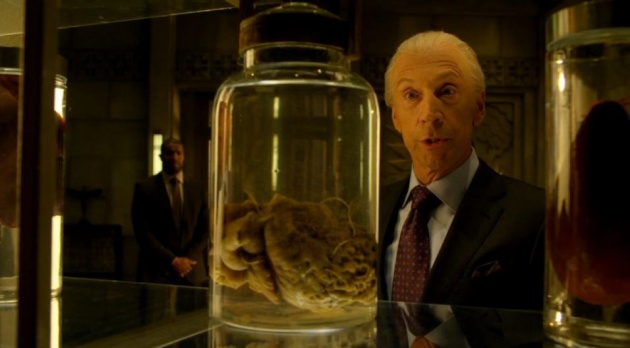 Palmer has Miriam's heart and is telling Reggie that it is the heart of one who has been turned. He is placing it on shelving filled with other glass jars; Palmer says he thought the heart would make a nicely ironic addition to his collection of his own failed organs. So, Palmer keeps his own removed organs in glass jars. That's not remotely weird or creepy. Palmer wants to know why Reggie didn't tell him about Eph's EMS broadcast; Reggie replies that Palmer was dying, so it didn't seem important.

Reggie Has Had Enough

Palmer wants to speak to Margaret Pierson, as he has heard she is planning on quarantining Manhattan, and wants Reggie to bring the car round and call Eichorst. Reggie says no, he won't do it, not anymore. In the past, Reggie has defended Palmer, and Palmer has now made a devil's bargain, and taken Reggie with him. Palmer is an affront to nature, and to God, and part of Reggie wants to kill him to restore the natural order. He can't, though, not after everything Palmer has done for him. So Palmer can consider his debt paid in full and Reggie is leaving. Palmer demands to know what Reggie will do without Palmer to protect him; Reggie asks how Palmer will survive without Reggie to protect him. 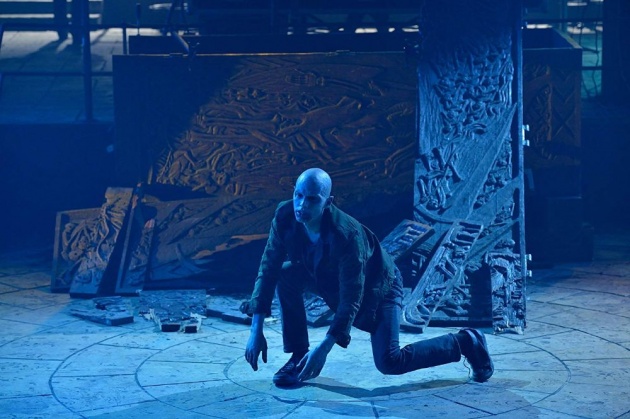 The Master is at Gabriel Bolivar's Theatre

Eph and Vasiliy have arrived in Tribeca and Eph sees the name Bolivar. He says that Bolivar bought a movie theatre in Tribeca and this is it. Vasiliy knows the building, the Vestry, and tells Eph it has been a lot of things over the years. Eph says that there is a high probability that the Master is inside; Vasiliy tells him that isn't enough - they need to know. Vasiliy looks around then kicks down the door to a small bar and restaurant. One of the things the Vestry used to be was a speakeasy, and it and the place whose door Vasiliy has just kicked down were owned by the same man. Who was never found with alcohol on the premises during Prohibition - because he built a secret tunnel to the sewer that leads to the Vestry. Which they are going to use. Eph thinks they should have backup; Vasiliy tells him he is the backup. Inside the Vestry, the Master's coffin is there and it's being repaired. They head back to tell the others but first Vasiliy removes a manhole cover to flood the sewers with sunlight.

Zach Has to Come to be Safe

Dutch has been trying to gauge what effect their pirate broadcast had but tells Eph and Vasiliy when they return that all the channels are gone. Eph thinks this is an answer in itself. Nora is up on the roof when Eph finds her. He tells her he can't go, because he can't leave Zach as Kelly will come for him. Nora tells Eph to bring Zach with them. Eph is not impressed with that idea but Nora tells him he no longer has the luxury of choice. They have to fight and the only way Eph can protect Zach is to keep Zach by his side.

Pierson and Eph's former boss Everett are discussing shutting off Manhattan so that nothing gets through. Everett tells Pierson that something always gets through and that they will need every National Guard unit in the north east. There is a knock on the door which turns out to be Palmer and Eichorst. Palmer has turned up, so he says, to prevent Pierson from making a grave mistake. He shuts the blinds and Eichorst enters the room. Pierson says that either Palmer lied or was lied to, and she has to speak to the president in an hour, because they have proof that people are being turned into horrible monsters. Palmer warns Pierson that Pierson panicking could end her career; something she is not bothered about.

Everett Gets a Promotion

Palmer asks to have a private word with Pierson and leads her onto the outside terrace, leaving Everett with Eichorst. You can see what's going to happen before it does - Palmer throws Pierson off the terrace. When he enters, Eichorst asks what about this one, meaning Everett. Palmer asks Everett what he would do if he was suddenly promoted thanks to Pierson's 'suicide.' Everett is clearly more concerned about saving his own skin than protecting the people he is supposed to protect, and is willing to do anything Palmer wants. He also says that martial law is overreacting. So Palmer tells Eichorst that this one they will keep. Great, Everett has shown his true colours and rolled over, which will probably cause the deaths of countless others. 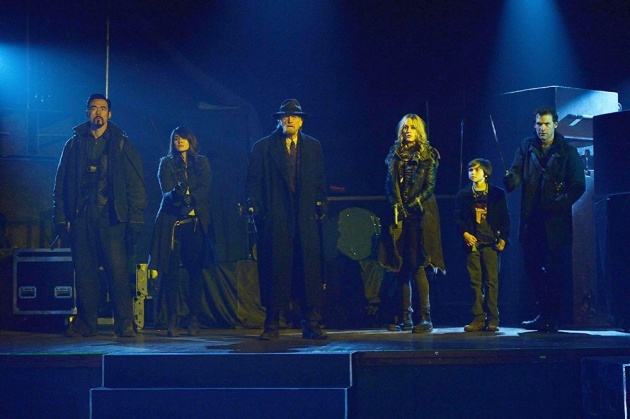 Eph and the others launch their raid on the Master's lair, and discover something disturbing in the process. Gus attempts to attack the person who captured him again - he is told to stop doing that - and gets some new information revealed. Something is finally revealed about this second lot of vampires, because they are vampires, but there are still many questions unanswered. No cliff-hanger ending to the season, but there are new questions leading into season two.

The Strain - The Master Trailer