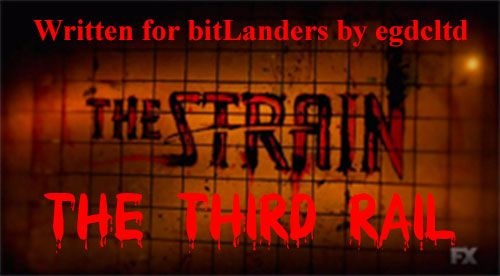 "The Third Rail" is episode eleven of season one of The Strain, a vampire horror series based on the novels by Guillermo del Toro and Chuck Hogan. In this episode, Eph and the others head into the underground looking for the Master.

Vasiliy is in the basement of Abraham's shop when Zach comes in with his filming him and says that they are coming. Vasiliy looks into the camera and says UV light bomb test. Then Eph comes in and grabs Zach, getting him out of the way. Zach complains that he can't see anything and Eph tells him that's better than burning out his retinas with UV light. Abraham looks in and Vasiliy if he's sure this is a good idea. Vasiliy replies that they are about to find out. There's a small burst of light as Vasiliy touches two wires together, and then the board the light was attached to catches fire. 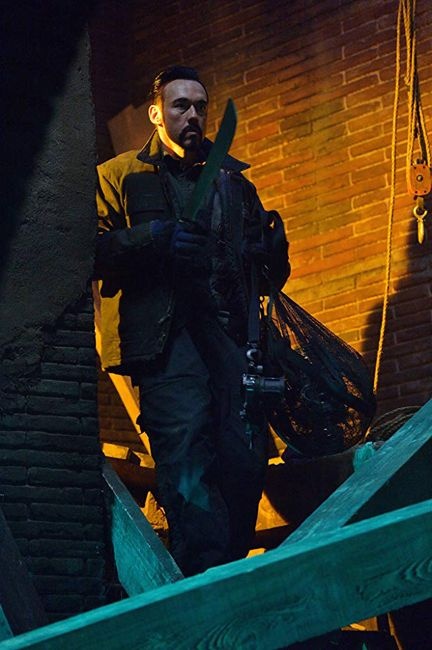 Zach asks what happened and Vasiliy tells him that, in engineering terms, they call that a fail. Zach replies epic fail. Vasiliy comments that the light was strong whilst it lasted. Eph suggests that to stop the bulbs burning out get them to pulse, like a strobe. Vasiliy says that he could rig up a smoke machine too, and put on some tunes. Really get the vampires dancing. Eph is not impressed by this but Vasiliy says he's joking. He's not saying he disagrees with Eph, because he doesn't. They just can't do any more tests though. Vasiliy can rig up the rest of their bulbs and put an oscillator in and then hope for the best. Abraham tells Vasiliy that has been his method of operation for the past six decades.

Mariela is Looking For an Ashtray

Upstairs, Nora's mother Mariela is rummaging through the kitchen saying she can't find anything. Apparently she's looking for an ashtray taken from a hotel in Buenos Ares. Nora tells her mother that the ashtray broke years ago and anyway, this isn't her kitchen. Abraham hands over an ashtray and Mariela says she doesn't like him. Nora tells her mother that Abraham is their host; her mother replies that he has a dark soul. Nora tells her mother in Spanish that she isn't being polite. Afterwards, Nora apologises for what her mother said, saying she's wrong. Abraham tells her she isn't. Zach asks Nora about the ashtray; Nora tells him that it's from the hotel her father took her mother on their first date. Her father wanted a souvenir, as he knew he was going to marry her. Zach replies that maybe it's good that Nora's mother still remembers it then.

Gus Arrives Home to Find His Brother Has Turned

In "The Disappeared" the transport that Gus was in taking him to Rikers crashed when Felix turned into a vampire and attacked other prisoners and the guards. Gus escaped. Now he has arrived at his mother's apartment. He knocks on the door but there is no answer, although the television can be heard. Gus discovers that the door is unlocked and opens it. Inside, Gus calls for his mother but can smell something. He sees that the fridge is open and his brother is standing in front of the television. Gus asks Crispin where their mother is; Crispin slowly turns around revealing he has become a vampire. He goes for Gus, who takes him down. 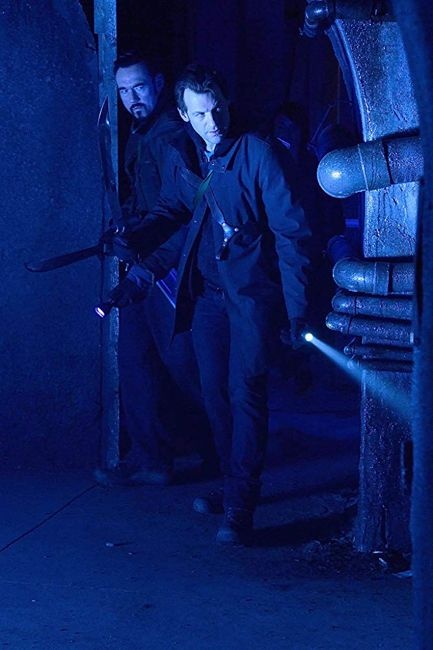 Perhaps Nora Should Stay Behind

At Abraham's, Eph is examining a big shiny sword, saying 'First do no harm.' Nora tells him things have changed and asks if they have. Hundreds of years ago, a disease would make people think they had been cursed. Then someone like Eph and Nora would come along and through scientific process track the disease to its source, lifting the curse. Nora asks if Eph believes now that if they slay the Master the plague of vampires ends today. Eph tells her he has to. Eph is worried about leaving Zach at Abraham's, asking what if he's orphaned. Or worse. Nora tells him they will make it back. Eph suggests that maybe one of them should stay behind. Nora asks if he means her. Eph tells Nora he would never ask her that and she replies that he just did. Nora's answer is no; she is leaving her mother behind as well. Eph says that they are not assassins. Not like the kill happy exterminator or the man with the ancient grudge. The other two have no Plan B, as they have no-one but themselves to risk. Nora tells him they have no other choice.

Zach Asks About His Mother

The others are getting into the van and Eph is talking to Zach. Zach wants to know when they will be back and Eph tells him by sundown at the latest. Zach replies that's the whole day and asks about his mother. In the previous episode, "Loved Ones", Eph had followed Kelly's trail to her friend Diane's. Where he found that Diane and her son had been turned, and Kelly's necklace was in Diane's hand. At which point Eph realised Kelly was gone. Somewhat oddly, Kelly had gone straight to the Master, even though there were other vampires around who were further along. Abraham had explained Eichorst, saying that the Master gives some vampires more power. Perhaps Kelly is going to be one of those.

Eph hasn't told Zach that his mother has turned. He says to Zach that the best thing to do is to take out the thing that is causing all this. Zach wants to know why he can't come with them. Eph replies that outside it's dangerous and he can't control it. Here, Abraham's basement is a fortress and an armoury, and the safest place he can imagine. Eph asks Zach to look after Nora's mother; Zach asks if that shouldn't be the other way around. Normally, yes. Zach tells his father to be careful and Eph says that he promises. Vasiliy tells him it's time to go and Eph locks the shutter to Abraham's shop, giving Zach the key. 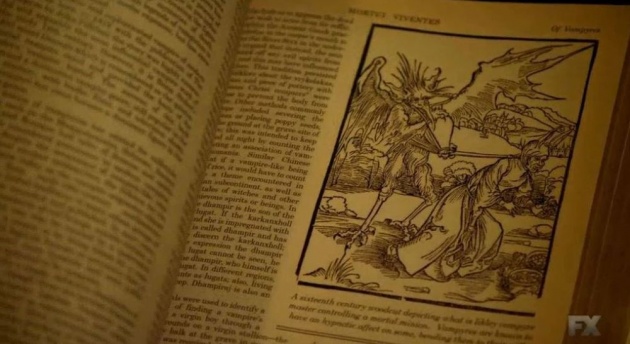 After they have gone, Mariela asks Zach where her ashtray is, demanding to know what he did with it when Zach says he doesn't know. He says Nora will find it when she returns. When Zach is looking at some of Abraham's weapons, Mariela asks him where her daughter is. She's out of cigarettes and needs some cigarettes. Zach replies that his mother says she shouldn't smoke. But Nora will get her some when she comes back. This is a situation you can see causing problems.

Are We Having Fun Now?

On the streets there is more looting and Vasiliy says that everyone is having fun now. The implication being that they won't be later. It's every man for himself and Abraham says that the Master is counting on this. 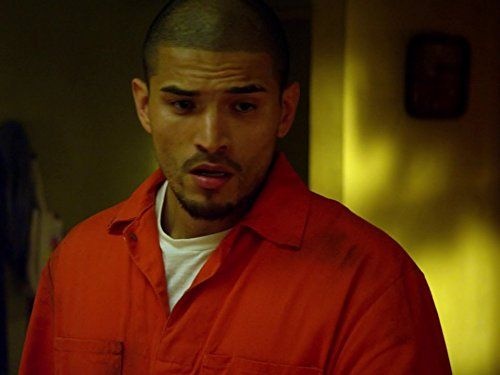 Gus is in his mother's apartment trying to ring her mobile, but there is no answer. Then he grabs another number and calls her work. However, no-one has seen Gus's mother there. After hanging up, Gus hears a noise. He goes to look and is clearly worried. And he should be; his mother is in a cupboard, infected and turning. This upsets Gus a lot; whatever else, he was devoted to his mother.

Back at Abraham's, Zach is leafing through a book when he hears shouting. Mariela is upstairs yelling through the shutter for someone to help, she needs to get out of there and it's locked. When Zach comes up Mariela tells him to give her the keys; Zach replies that his father gave them to him. Mariela says that they have taken her Nora. Zach tells her they are coming back but she says that they will never come back. She must leave this place. Mariela gets out her cigarette packet, but it's still empty. Looks like she's suffering from withdrawal symptoms on top of everything else. Zach asks Nora's mother if she will go downstairs and wait if he goes out to get some cigarettes. Apparently she will.

The others arrive at their destination, the place Vasiliy had decided was the epicentre of the vampire infestation, going by the rats. When asked why the World Trade Centre, Abraham replies that the Master is drawn to places of great human misery and suffering. Vasiliy thinks they are in the right place. Nora complains about the mess; Abraham tells her that with any luck it will get a lot messier.

So the four of them are wandering around the subway tunnels, which may still have electricity, adding a further element of danger to a dark place where vampires roam. There are signs that many others have come this way before them - only those were no longer human. Eph is squabbling with Vasiliy; Eph has admitted he is a bit of a control freak and in this situation he is almost totally out of control. Vasiliy doesn't help matters by pointing out that it's the exterminator and pawnshop owner who know more. 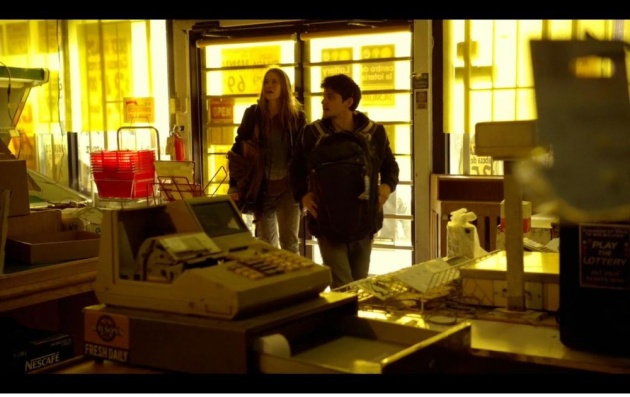 Zach is Looking for Cigarettes

Zach is currently wandering the streets, where there are sirens and people running and looting. Plus abandoned police cars. So it doesn't look exactly safe. Plus, he's more than a bit young to be buying cigarettes, so that will likely mean that Zach has to go to a shop where there is no-one there to sell them. And by no-one there, that means no-one who is still human and alive.

The Strain - The Third Rail Trailer