Bones - The Head in the Abutment 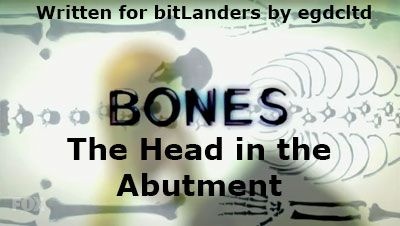 "The Head in the Abutment" is episode nineteen of season eleven of Bones, the forensic drama television series loosely based on the novels and life of anthropologist Kathy Reichs. In this episode, the body of a professional ice hockey player is found in a river.

Booth is at home and enters a room to find out that Brennan has filled it with stuff. They are supposed to be spring cleaning and Brennan says that they have to sort through all their possessions and keep only what they need. One of the things Brennan has decided to get rid of is Booth's 'Cocky' belt buckle. He objects to this and says he's keeping it - even though Brennan says he hasn't worn it in years. According to the book that Brennan is using, when decluttering, anything you do not use and/or love needs getting rid of. Booth suggests a string of stones which Brennan objects to, saying they are extremely rare African fertility river stones. Brennan instead suggests Booth's beer hat and his socks. She says that she understands that his socks are how Booth keeps his individuality at the FBI, but he doesn't need 100 pairs. Booth's own suggestion is that Brennan should get rid of her books - after all, she's already read them. In such a situation, where the person you are married to wants to get rid of your books, there really is only one rational decision - divorce. Booth gets a message and tells Brennan that the lab confirms it, she needs to get rid of her books. Plus they have a dead body. 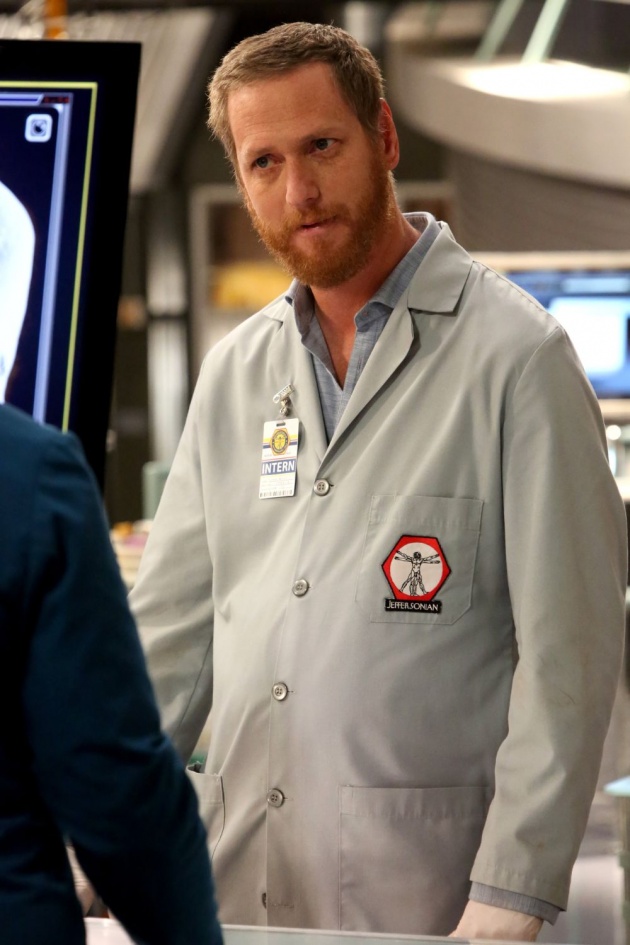 No More Playing Games; There's Work to Do

Dr Wells and Hodgins are playing a video game with a lot of trash talk - but trash talk with a lot of science thrown in. Cam enters and asks if she's interrupting, and both answer yes. Cam tells the pair that it's too bad, as a body found in the Anacostia River has been brought in. Then Oliver wins the game and Hodgins calls him a cheater. Hodgins wants a rematch and Cam has to repeatedly tell them that they have work to do. It's like dealing with children.

Missing a Head and Chomped On by an Eastern Snapping Turtle

The body is lacking a head and Brennan says that it's of a white male in his 30s. The man had suffered massive injuries all over his skeleton and Hodgins suggests that maybe he cheated at video games and his friend threw him off a cliff. Oliver's retort is that maybe he was so depressed at losing he threw himself off. Brennan considers these suggestions to be juvenile and not rooted in facts. Cam comments that the victim had suffered a lot of tissue damage and the body has also been feasted on by the Eastern snapping turtle. Not the first time that's happened. 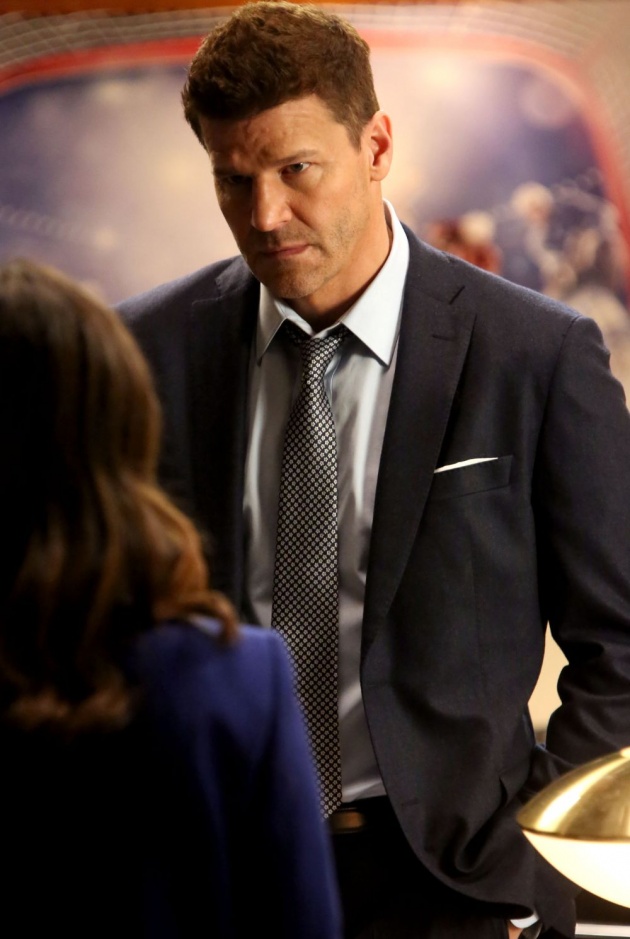 The body was in the river for 12-15 hours and Brennan says that the head was removed post-mortem and not the cause of death. Angela says it's definitely not the cause of death. There is speculation as to what caused the decapitation, such as a sword. Angela says it wasn't a sword, but a curved weapon spinning really fast. Clearly Angela knows something the others don't.

Angela had run a search and come across a video that has had 200,000 hits in an hour. The video is of a couple of drunk idiots in a boat when one sees what looks like a dead body and the other says it's a mannequin. They continue on in this vein and Angela fasts forwards five minutes to find more of this discussion. Then some more. Then to the end of the video. The idiots finally agree that it is a real dead body and decide they need to tell someone else. So one man starts the boat's motor. Which is just by the dead body. Which is how the head got severed. Brennan wants Angela to do one more thing; give the video a thumbs up because she finds imbeciles amusing.

The Victim is In Excellent Shape; Apart from Being Dead

Only a few of the victim's fractures were post-mortem, the others had been acquired slowly over 17 years. Wells speculates that the victim did a high risk job, such as MMA, rodeo clown or simply got into a lot of bar fights. Cam tells him there was no alcohol in the man's system and the last thing he ate was a protein bar. Overall, he's in excellent shape. Except being dead. Angela hasn't managed to find an ID because she has no fingerprints, implants or even a head to do a surgical reconstruction. Oliver points out all the things they do know about the victim. Which narrowed it down to a mere 29,000 people. 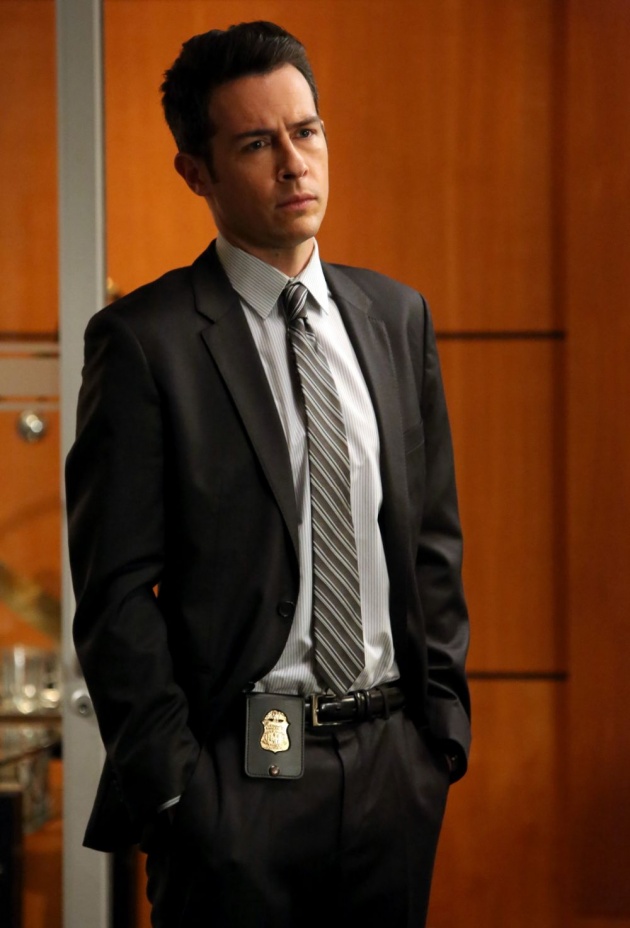 Booth Knows Who the Victim Is

Booth and Aubrey meet Brennan at the diner. Booth has bought Brennan an ebook reader, because they are smaller than a hardback and you can store thousands of books on them. Brennan tells him that she enjoys reading physical books and many of hers are too rare to have been uploaded to an ereader. Brennan hasn't managed to find a match for the victim's injuries at local hospitals, suggesting he was from out of town or travelled around a lot. However, when she starts listing them, Booth says he know who the victim is. Apparently he's a hockey great known as Seth Lang.

Hodgins Has a Drone to Search the River

Cam has got a 90 minute window for time of death and Hodgins has drawn up plans to search the river. And he wants to do it with a drone, of a type used to deliver packages in Shanghai. This, when it's done, causes a few unexpected problems. 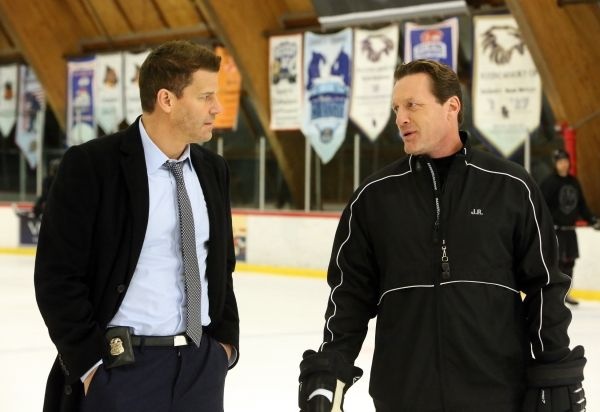 The Dead Man Was a Big Deal

The victim's hockey team is being run by the trophy wife of the now dead former owner, and she seems to be under a lot of pressure. Lang was their only all star, so he was a big deal. If Booth wants to talk to the coach, he will either have to wait or get some skates on and go onto the ice. Booth is definitely up for the latter. The coach says that the only person Lang had problems with was his enforcer, Drew, who he got fired. Drew is brought in for questioning and seems like a bit of an idiot. 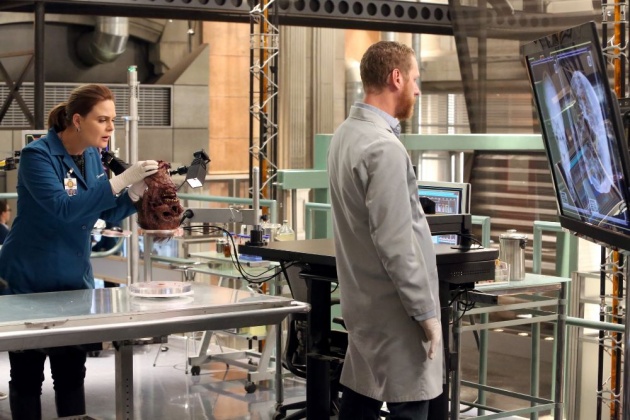 Hodgins and Wells are Both Using Drones

Lang appears to have been drowned and it also looks as if he had a fight before that. Only he wasn't the sort of player to get into fights. Hodgins has got his drone to search the river. In fact, he has two - his rematch with Oliver will use drones. Whoever finds the head first wins.

Booth runs into someone he played hockey against 20 years ago and the man clearly hasn't got over a penalty that Booth scored past him. Lang seems like an all-round clean guy, popular with everyone, but not everything is as it seems. More than one person is not what they come across as, and there are machinations afoot at the hockey team.

Bones - The Head in the Abutment Review