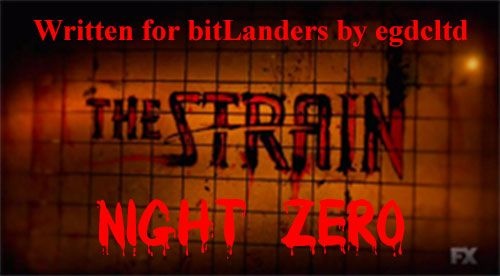 "Night Zero" is episode one of season one of The Strain, a vampire horror series based on the novels by Guillermo del Toro and Chuck Hogan. In this episode, a plane lands in New York then goes dark.

What Makes Us Human?

This, the feature length first episode in a series based on the trilogy of the same name, opens with a narrator talking about hunger. How it's easily quieted, easily satiated. But there is another force, a different type of hunger, an unquenchable thirst, one whose existence makes us human. This force is love.

Coming in to Land

The episode opens on a plane at night on February 8th. The captain is on the intercom, announcing to the passengers that they are on their final descent into New York. A flight attendant, Rose, gets a call from one of the plane's internal phones. Another flight attendant tells her to get back to where he is, because he needs help.

There's Something Alive Down There

Rose makes her way to the rear of the plane, talking to several of the passengers on the way. When she gets to the rear of the plane, she says to the other attendant, Peter, that he hasn't even started cleaning up. Peter tells Rose that there is something alive in the cargo hold. Rose suggests a dog, but Peter says it's really, really big. Rose says that there are no animals on the cargo manifest. Peter tells Rose to feel the hatch, so she can sense the thing moving below. She does, but feels nothing, so opens that hatch. She sees nothing within either. Rise closes the hatch again. Then something strikes it from below. Before the attendants can do anything, whatever is inside the hatch forces its way out. Whatever it is, it's big and attacks them. 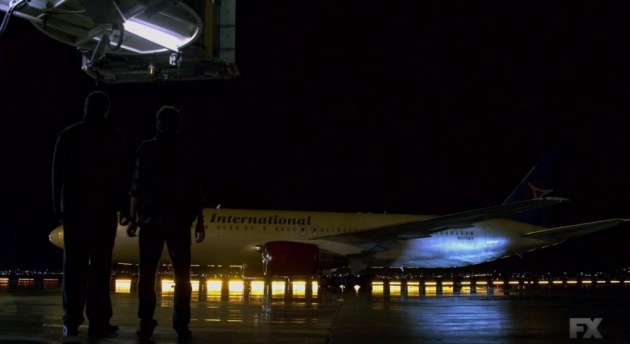 The Plane is Not Responding

One of the operators at JFK tower is trying to contact the plane, but it isn't responding. After the man checks his screen, he tells his boss that the plane is stopped on the service apron and has gone dark. The two make their way out of the tower to the plane, which is dark and cold. The boss says that there is something really wrong, as several police cars arrive. All of the window shades on the plane - bar one - have been closed. The boss wants everyone calling; SWAT, Homeland Security, Port Authority, FBI, TSA and CDC. No-one is to call home or share the news. It looks bad.

In Astoria, Queens, a man parks in front of a fire hydrant and puts a CDC sign on his car. Another man tells him he can't park there but the man claims it's official CDC business. He's parked outside a Family Counselling Centre, so it's probably not official business. The man is also struggling to put a tie on. 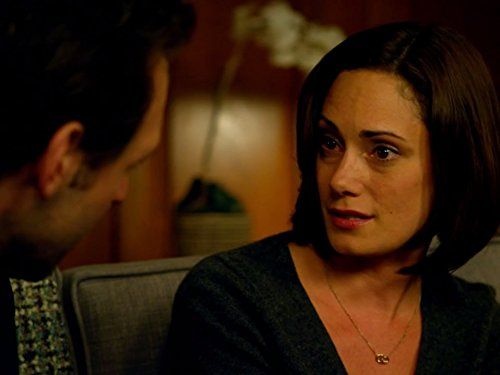 Inside, the man goes and speaks to a young boy, Zach, who's his son. Zach tells his father that he's ten minutes late. Inside, the man - who is Dr Ephraim 'Eph' Goodweather - sees his wife and a counsellor. The counsellor says that this is the last of the six court mandated custody hearings, and he's been late for four of them. The counsellor also says that Eph tries to take over the session every time, and he interrupts, saying that it's his control issues.

Eph says he's an epidemiologist, and he can't simply take time off, because when he does, people die. His phone goes off, the first of many times. Eph's wife, Kelly, says he isn't a horrible person, he's just barely present. Unlike Matt, who she is currently seeing - the couple have separated - and Eph realises that Matt is the man he spoke to outside. Eph is now having two devices going off and Kelly says that this is the problem, this is who Eph is. He does leave. 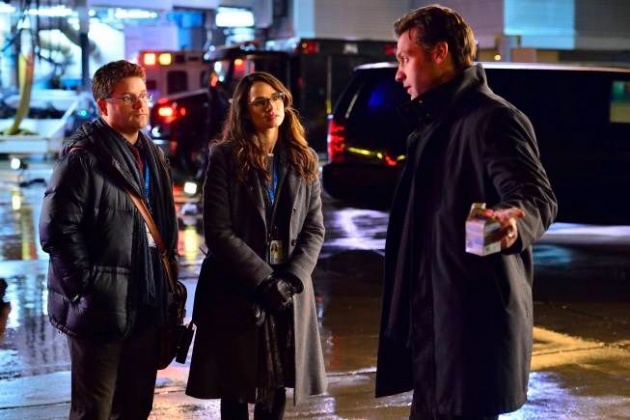 On the phone, he speaks to a colleague, Nora, who tells him that all the other agencies want to be lead. Eph says that it's an international flight, so the CDC gets first shot. When Eph arrives at JFK, he is told that Homeland is apparently wanting to get onboard as they believe it's terrorists. Eph says that terrorists usually crash planes, not land them and shut them down. There have also been no 911 calls from the plane. Or any calls. Over 200 people have been silent for over an hour. The Homeland representative still wants to go on first, so Eph explains to him what viruses want. They have no beliefs, no cultural hang-ups, no religion. All they want to do is spread.

A Buyer of Silver

In Harlem, at Knickerbocker Loans & Curios, two men enter. One appears to be armed. The other goes to the screen behind which is an elderly man. The 'customer' says that he understands the old man will buy silver without a receipt, and wants to know how much he will give for a watch. One that has been obviously stolen. The proprietor says he is always in need of good silver and examines the watch. He says it's just silver plated brass, though. The man who brought the watch tries to steal some money whilst the old man's back is turned.

Not an Easy Mark

This does not work; the shop's owner, Abraham Setrakian, quickly turns around and pins the man's hand against the screen, holding a knife to it. Abraham says that he knows the man's friend is armed, but he can easily slit his arm open, and the man will bleed out before help can arrive whilst Abraham hides behind the counter. He tells the man with the gun to hand it over, but keep the bullets, and the other one he has grabbed drops the money. Both leave, although one grabs a clock on the way out. Then Abraham sees the news about the plane, and the fact that it came from Berlin means something to him. 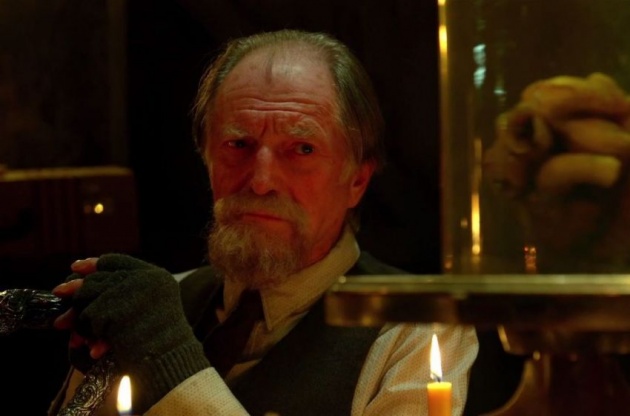 Talking to a Heart

In another room, Abraham quickly dismantles the gun - he would seems to have some skills and be more dangerous than he looks - and puts a sword cane back into its sheath. Abraham says that he doesn't know if he has the strength to do it all over again. What he is talking to is a rather odd-looking heart in a jar of liquid that is surrounded by candles. Abraham opens the jar and bleeds a little into the liquid, and strange worms come out of the heart to feed on the blood.

Eph and Nora are suiting up to go on the plane. Nora tells Eph that he has been separated from Kelly for a year, and things happen. She also wants to know if Eph every told Kelly about them. Apparently he didn't; Kelly had already asked for a separation so he didn't see the need. 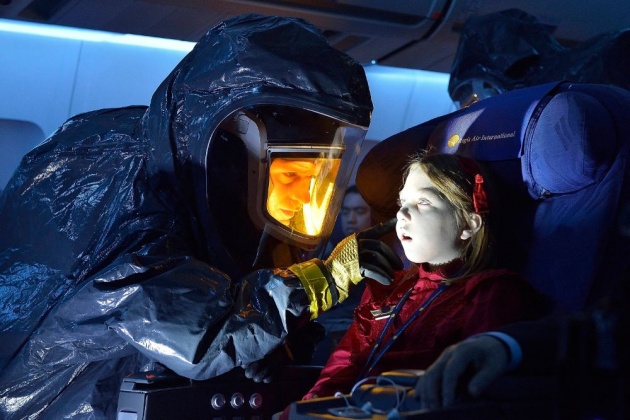 A Plane of the Dead?

On the plane, all the passengers look to be dead, suddenly, painlessly and without violence. Ammonia can be detected in the air, but there shouldn't be. UV lights show biological material all over the plane. The two separate up and it comes as no surprise when one of the bodies twitches. Nora gets into the cockpit, which should have been locked from the inside. Then people start moving again. It looks like four people have survived. Or have they? 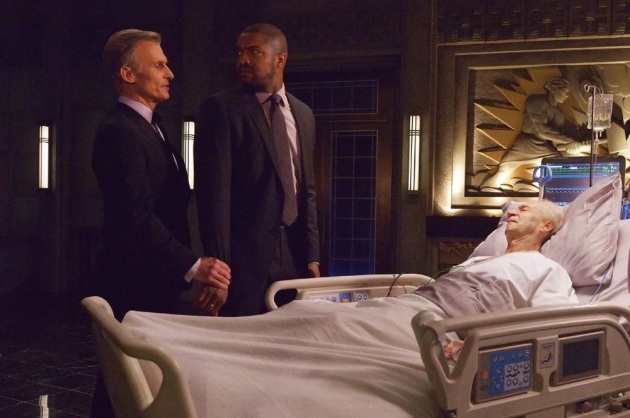 Elsewhere in New York, at a building belonging to the Stoneheart Group, a man is in an elevator. Something twitches over his eyes, which definitely looks odd. The man, Eichorst, gets out of the lift and says that he needs to speak to Mr Palmer. Palmer's doctor says he's undergoing dialysis and is asleep. When this is done, Eichorst tells Palmer that the cargo has arrived safely. Palmer makes a comment to Eichorst about the room's temperature. Palmer's breath mists; Eichorst's doesn't. Eichorst actually says that sometime he misses breathing. So, not exactly human then. 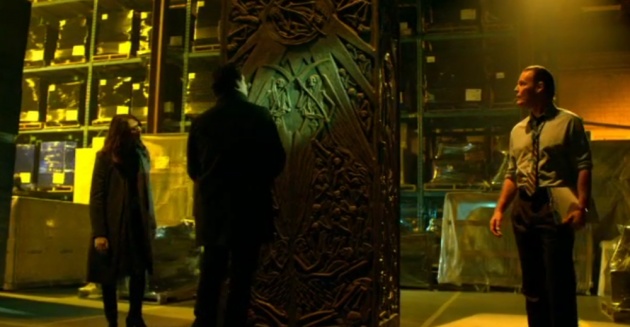 Eph decides to invoke the Health Powers Act to quarantine the plane and the survivors. His boss, Dr Everett Barnes, seems more interested in politics and himself than anything else. One of the things on the plane is a really big carved wooden cabinet. Nora says it looks like a coffin, but it's nine feet tall. It's also full of soil.

Abraham arrives at the airport and wants to talk to Eph. Abraham knows things that he really shouldn't, which certainly worries Nora. Abraham also sounds a bit crazy - and he doesn't want to say everything because he will sound crazy. Or, perhaps, crazier, given that Abraham wants all the bodies destroying.

This is Not Your Usual Infection

The CDC at this point believe they are simply dealing with an unknown infection - and, perhaps, in a way they are. But it's an infection whose victims do not stay dead - and they all appear to have had stuff drained from their blood. There is something big and nasty roaming around the airport, and Palmer intends to bring it out and into New York. Eph may not know it yet, but things are going to get very bad.

And So It Begins

Every time the episode moves to a new place, a clock is displayed on screen along with the location. Counting off the time. Night Zero is probably similar to Patient Zero, the start of the initial outbreak.

The Strain Season One Trailer