Bones - The Big Beef at the Royal Diner 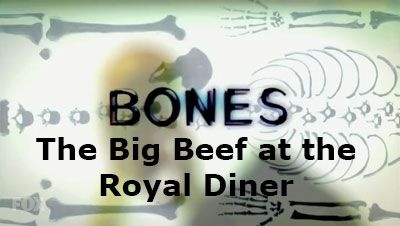 "The Big Beef at the Royal Diner" is episode sixteen of season ten of Bones, the forensic drama television series loosely based on the novels and life of anthropologist Kathy Reichs. In this episode, the host of a food show is found dead and a possible suspect is the owner of the Royal Diner.

Not the Obstacle You'd Expect

The episode opens with a man yelling at some overweight women who are crawling through the mud. One woman says to her friend that she thought she'd signed up for exercise boot camp, not actual boot camp. After the mud crawl, the woman who spoke is told by the instructor to climb a wooden wall. Which she manages to do, and sits on the top of. Then falls off and lands on the ground on the other side, screaming. The instructor makes a sarcastic comment but, when he finds out that the woman has landed on human remains, he becomes far more considerate.

Dem Bones is Not Anatomically Correct

Booth is at home, happy about the Flyers' win the previous night, and is making pancakes for Brennan and Christine, and the latter makes an anatomical comment about the pancakes. Her interest in human anatomy pleases Brennan. Then Christine starts singing a song about bones she learned at nursery - the children's version of Dem Bones essentially - which Booth likes. Brennan, however, is listening with a look of horror on her face because of how hideously inaccurate the song is anatomically (she spends parts of the episode trying to come up with a new, anatomically correct, song to sing). Booth and Brennan both then get messages about the body in the forest. 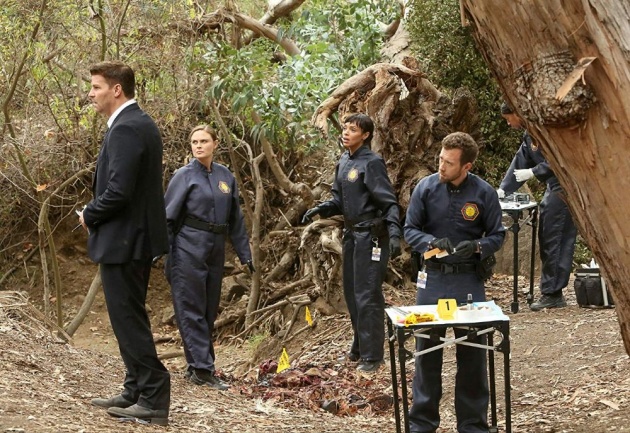 Acid in the Mud

At the scene, Brennan makes a comment about the remains, a man, being crushed by some sort of weight. Which, as Cam discretely points out, was the woman who landed on him. Booth asks what the smell is and Hodgins tells him it's corrosive chemicals, a mixture of acids and bases. Which, Hodgins says, means that decomposition was accelerated in some areas but the chemicals neutralised each other in others. Clearly not the work of a professional. When the instructor hears that there was acid in the mud, he starts removing his outer clothing and tells the ladies to do the same. Which is not actually necessary. The clothes are covered in food stains and the victim appeared to be diabetic. He also had two pancreases (which leads to a discussion on the correct plural for these) and three kidneys.

In the previous episode, "The Eye in the Sky", Booth had gone undercover as a gambler. Which, given he's an addict, worried everyone. It seemed, after Booth didn't wait for a hand with about $20K in the pot to play out before arresting the killer, that he was as okay as he insisted he would be. At the end of the episode, however, Booth had contacted his bookie to place $200 bet on the Cardinals. When Aubrey comes in to see him at the FBI, Booth has just received a text message about a $1,500 win. It definitely looks as if Booth has fallen off the wagon.

The Victim Hosted a Food Show; Naturally Aubrey Had Heard of Him

Booth tells Aubrey that the victim is a Chili Reuben, from the show Getting Spicy with Chili Reuben. Aubrey knows who Chili is and is a big fan of the show. Given how often Aubrey has food in his hand, Booth expected him to know this. Chili was in D.C. the previous week shooting a new episode, and Aubrey is upset he missed this.

Hodgins is Going to be Rich Again

Hodgins tells Angela that he has been contacted about a company about that the thing he invented in the previous episode, at Ms. Warren's suggestion, to stop glass breaking. It could be huge. Hodgins' lawyer is looking into it, and the company will give him an upfront payment, but also a royalty of $1 per unit - and 20 million units are predicted to be shipped in the first year. Which will make Hodgins and Angela rich. Okay, Hodgins was rich before - much, much richer than that - but this has him very excited. Angela wants to know if Hodgins has told Cam; after all, if Cam hadn't prevented Hodgins from working on his invention at the Jeffersonian, the Jeffersonian would have got most of the money. Hodgins decides to wait and see if the offer is legitimate.

Chili was doused with some pretty common drain cleaners after his death, which isn't helpful. His producer says that they spent the day shooting at different diner in D.C. and that people generally liked Chili (which, as the episode progresses, seems less true; he was not that nice a person). Aubrey is willing to watch the unedited footage of the day's shooting, which he does with Angela. Who notices that Chili's trademark ruby chilli earring is missing. 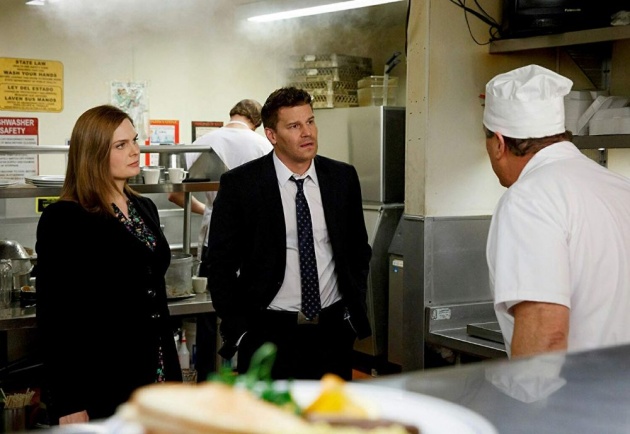 Chili Gave an Unfavourable Review of their Favourite Diner

Booth and Brennan are at the diner when Booth gets a call from Aubrey. Apparently, of the six diners that Chili ate in, he gave them all favourable reviews. Bar one. The one Booth and Brennan are in, their favourite diner. Awkward. This means that Frankie, who runs the diner, is now a suspect. According to Frankie, the reason Chili gave them an unfavourable review was because Frankie refused to fork over $3K for a favourable one. Only the dishwasher was there when this happened and he says he doesn't pay much attention to anything that isn't his job, because Frankie won't let him. The dishwasher is such a scary looking individual that he's too obvious to be the killer. 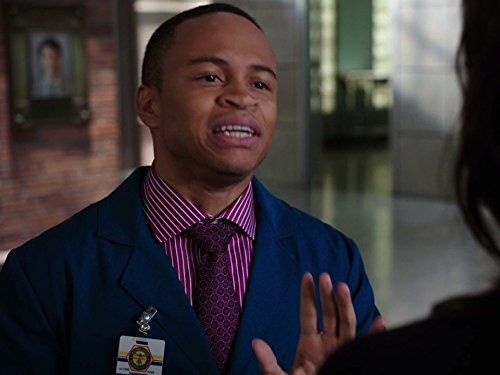 Cam is Worried About Arastoo

Clark mentions to the others that if the diner closes, the waitresses will lose their job and Hodgins comments that they will lose their favourite eating place. Cam says that they won't let this prior relationship affect their work. Clark has a quiet word with Cam about Mr. Vaziri, who went to Iran to see his dying brother - even though there was an arrest warrant out for him - in "The Baker in the Bits". Cam was worried by this. Arastoo has emailed Clark to tell him everything is fine and to tell Cam that. Cam wants to know why Mr. Vaziri didn't contact her directly. Apparently he did. Repeatedly. But Cam didn't believe that everything was okay, so Arastoo asked Clark to do it. 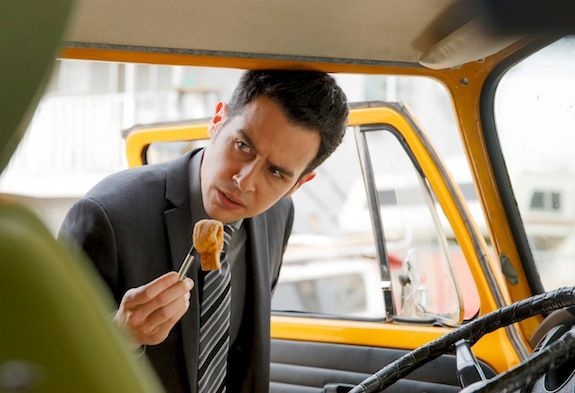 Chili Was Not a Nice Person and Had Many Vices

Despite Chili having a successful TV show, he was apparently broke. And indulged in far too many substances. His soundman pawned Chili's earring just before he died, but he claims that this was at Chili's request, because Chili wanted to buy some crank. All in all, Chili doesn't seem like a terribly nice person. But who killed him, and how?

Bones - The Big Beef at the Royal Diner Trailer