Bones - The Final Chapter: The Flaw in the Saw 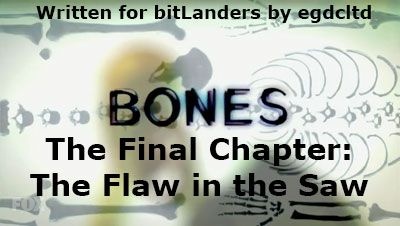 "The Final Chapter: The Flaw in the Saw" is episode six of season twelve of Bones, the forensic drama television series loosely based on the novels and life of anthropologist Kathy Reichs. In this episode, a champion lumberjill is found dead and Booth and Brennan head to a lumberjacking contest. 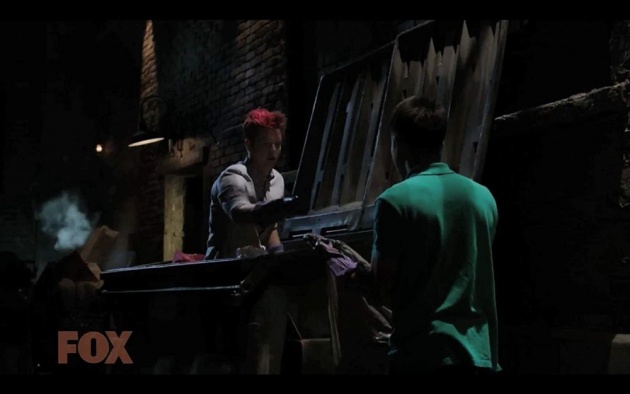 Dumpster Diving Outside a Taxidermist's

Two young men are outside a taxidermist's and one of them is in the dumpster. Which is filled with disgusting taxidermy waste. The one in the dumpster isn't happy but his friend says they can't let Cooper beat them again. The one in the dumpster has dyed orange hair and the other has 'LOSER' written across his forehead. The dumpster diver finds a snake and they decide to take that; 'LOSER' says picture Cooper's face when he opens his car and guts pour out.. Then he picks up body parts and keeps asking what each is. The final part is a human arm. At which point the two flee. 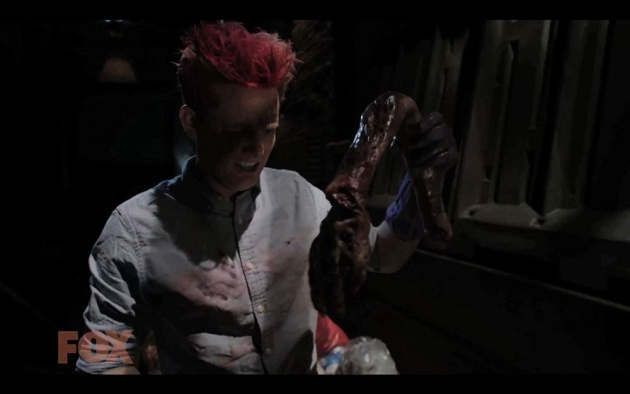 Christine comes in the house with Booth and states she is never riding a bike again before throwing her helmet in the air. Brennan asks what happened and Booth replies he was teaching Christine to ride a bike. She was a little wobbly, then Booth let go and she crashed.

Science Takes the Magic Out of Everything

Brennan states she doesn't want Christine to ride a bike until she can properly teach her about the physics. Booth asks what physics; you get on, you fall off, you figure it out. So Brennan starts listing all the physics involved until Booth interrupts, saying it's good not to know how something works as science takes the magic out of everything. Not a philosophy that Brennan is likely to agree with. When Booth mentions rainbows Brennan tells him that Christine already knows they are light reflected through water. To which Booth comments that of course she does.

Bones - The Final Chapter: The Flaw in the Saw Promotional Photos

A Little Viscera with Your Oatmeal

They both get messages about the body in the dumpster and Brennan says it will be fascinating to see how non-human viscera affect the rate of decomposition. Which causes Booth to lose his appetite. Brennan says that, after 12 years, he should be able to handle a little viscera with his oatmeal.

At the Jeffersonian, Dr Fuentes is in a suit and mask looking through all the bags inside a large watertight container. For it's filled with fluid. He comments that he thought the bags were not supposed to leak. Hodgins is watching and Fuentes suggests he dive in. Hodgins points out that they haven't invented a specialised wheelchair for intestine diving.

Cam wants to know if Hodgins has a time of death. He hasn't got a clue; Hodgins states that all the stuff in the dumpster is like Christmas to carrion feeders, so he can't tell when any of them started. Fuentes finds a bone and he says the victim is a woman in her mid-40s.

Hodgins Already Has the Skull

What? I'm having too much fun.

I hope you're still having fun when you're in hell!

Angela arrives and says it's disgusting. She wants to know if they have a skull yet. Hodgins tells Fuentes that skulls don't float, so... then secretly shows Angela the skull that the techs found at the scene. Hodgins tells Cam he's having fun and asks for ten more minutes. She gives him five. 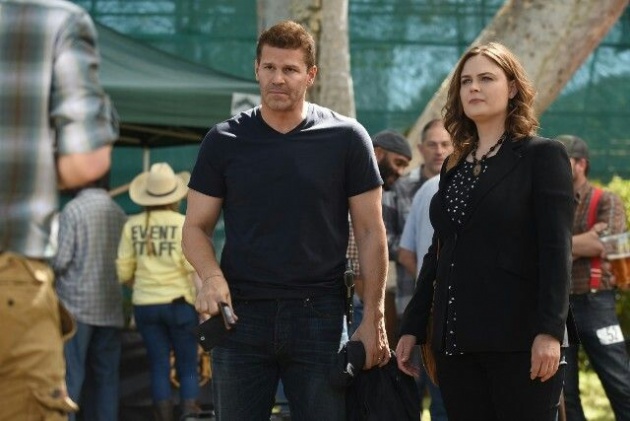 A Well-Travelled Knight with a Love of Golf?

When Brennan is there, Fuentes says he recovered every single bone from the dumpster. Brennan doesn't know why he's looking for praise for performing the most basic task. Probably because it was a basic task under fairly awful conditions. The only piece of clothing from the dumpster is a chainmail sock. So the victim was a knight. A hand has an injury commonly known as a golfer's fracture. Hodgins has found in the victim's sinuses spores from six species of tree from around the world, including one from New Zealand. As a preliminary theory, Dr Fuentes suggests they are looking for a well-travelled knight with a love for America's favourite pastime - golf.

The victim is a Phyllis Paul, who was reported missing on Tuesday by her live-in girlfriend Nancy Alpert. Phyllis was a college golfer who competed professionally but had never won a competition. She had spent the last ten years teaching private lessons.

She's a Lumberjill and She's (Not) Okay

Nancy Alpert says that the last time she saw Phyllis was on Tuesday morning, the second day of the competition. No, Phyllis wasn't competing in golf tournaments again. She had found her calling - as a lumberjill. Nancy tells them that in six months of the silly competitions, Phyllis had won more titles than in 20 years of golfing. Nancy does not have a high opinion of the tournaments. When money is mentioned, Nancy says she has more than enough for both of them. They were going to retire, travel, take lessons, marry. When asked who would want Phyllis dead, Nancy replies the other lumberjackers. One of them threw a golf club through her window with a note attached telling her to stick to golf. 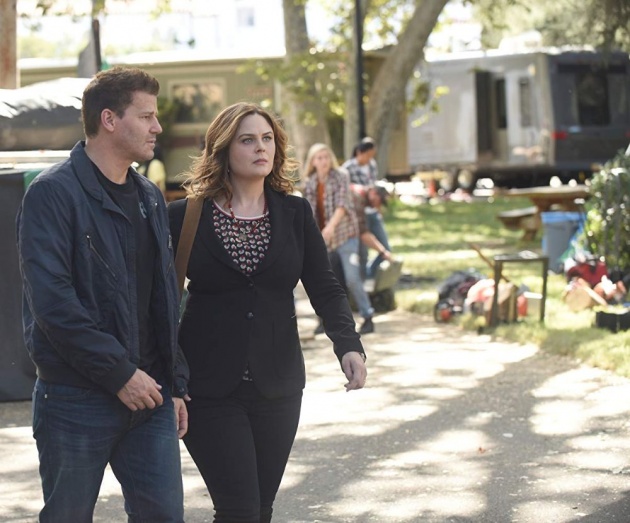 Heading to a Lumberjack Contest

Dr Fuentes tells Brennan that the victim was cut apart with a chainsaw. Brennan looks and agrees. Chainmail socks are used to protect lumberjacks from wild axe swings. Fuentes says that someone will need to go to the lumberjacking contest and Brennan replies that she and Booth will go. He offers to go so that Brennan can spend more time in the lab. Brennan realises that's because Fuentes wants to go himself. He admits this, and says what guy wouldn't, as all guys love chainsaws. Brennan is not impressed by his empirical evidence of this by asking one guard, and repeats that she and Booth will go. Fuentes asks her to take photographs and she says she will 'Chatsnap' it.

A Golf Stick is a Stick Used to Play Golf

Brennan tells Booth that lumberjacking uses the same muscles as those used for a golf stick. Booth does not like this term. Brennan can't see why he doesn't; it's a stick used to play golf. And that lumberjacking is just applied physics. Booth asks her not to ruin the sport for him. Brennan replies that everything is maths, including comedy, and she can make hilarious jokes using maths. And demonstrates. No, she can't. 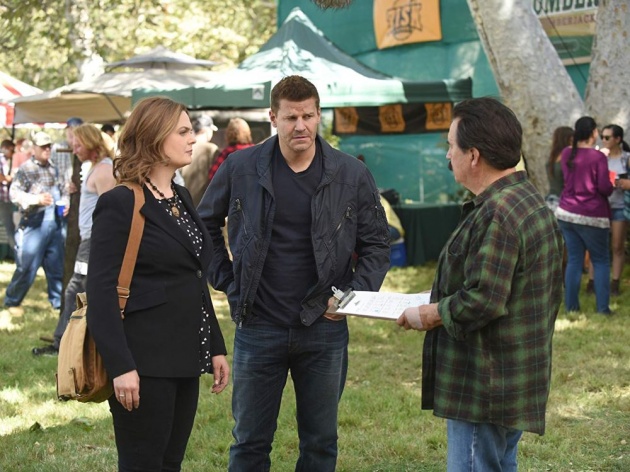 Bones, let's wait until she puts down that big chainsaw before we accuse her of murder.

At the Lumber Sports North East Regional Championship, the man in charge says it's too bad that Phyllis is dead but he has to go to the main stage. He says that Phyllis outclassed the competition. When asked if there was any competition in particular that was outclassed, he points to Helga Thisk on the main stage. Booth tells Brennan that they should wait until Helga puts down the chainsaw before they accuse her of murder. Which is a good idea. 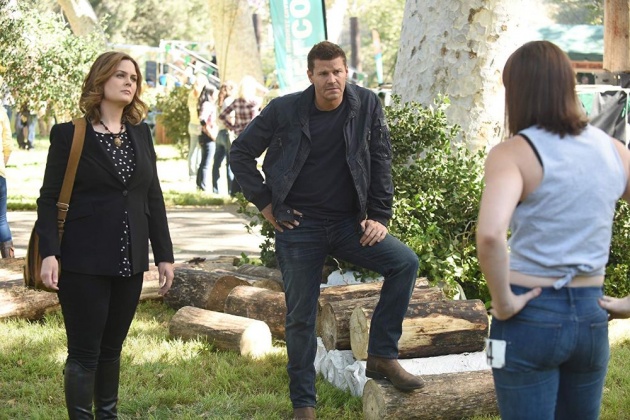 It's All About the Measurements

Helga says that it's just a game, even though there's a lot of money involved. She also tells them that Phyllis was her training partner, and was telling Helga her secrets. Phyllis used maths to calculate every chop, just like they do in golf. Brennan says they should do it in every athletic endeavour. Helga suggests the crazy fans, who hated Phyllis for making the sport dull with all the measuring.

Trying to Get to Play with Chainsaws

Hodgins is telling Fuentes that he found professional grade pesticide on the golf club thrown through Phyllis' window. So whoever did it was probably an exterminator. When Cam comes over, Fuentes tells Hodgins to ask her, but he bails. Fuentes tells Cam that every competitor has their own chainsaw, so he wants to subpoena them all so he can test them. Cam interprets this as he wants to play with chainsaws. He denies this, claiming he hates chainsaws, and if there was another way he would do it.

No Need for Chainsaws

Sadly for Dr Fuentes' desire to play with chainsaws, there is another way. Cam tells him she was going to say it's a good idea but, as he doesn't want to do it, she has got the sliced bits of wood from Limber Sports, each labelled with the competitors' names. So he can try and match the stria from the wood to the bones. 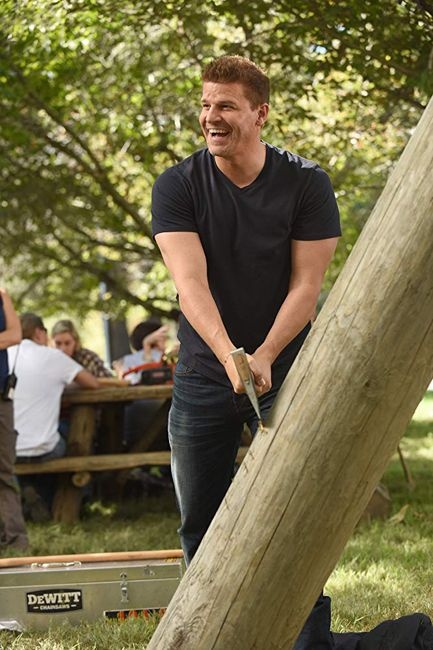 The fans did seem to hate Phyllis. One in particular starts a chant against her, and the crowd throws food at the stage. His name is Gene and he works for his dad's extermination company. When Brennan and Booth approach Gene, he is drinking beer. He says he's 21 - he's 18 - and bolts up a log. Booth starts chopping it down, and Gene comes back down.

Gene says he loved Phyllis. At first she was boring, but later she came to be too much fun to have around. The measuring sucked but they would go to Phyllis' events just to heckle her. The flapjack guy even sold special pancakes just to throw at Phyllis. The two apparently had a hilarious feud. 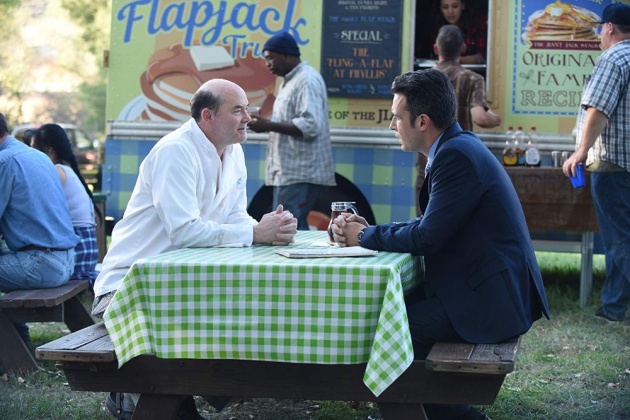 Aubrey gets to interview said flapjack guy, Jack Flap, and tries his pancakes. Vegetable shortening was found on the body but Jack is disgusted and says he uses butter, that he makes himself. Aubrey says he should have caught that and tastes the pancakes again. He agrees, and says there's a hint of smoked meat. Jack uses bacon that he cures himself in the batter to balance out the sweetness. Aubrey enjoys this part of the job. 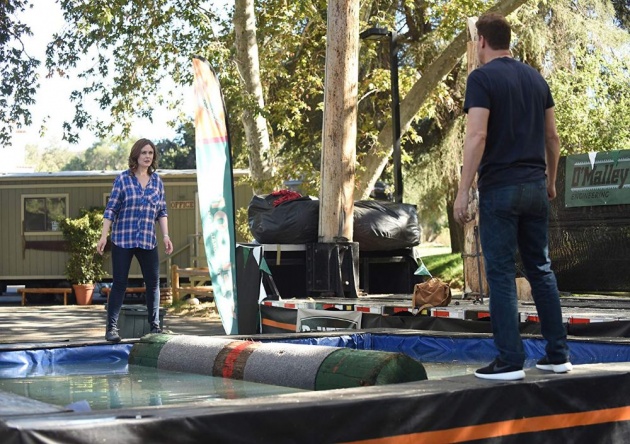 Not Getting the Picture

Unfortunately there's a small grain of intelligence in that theory.

There's one point when a man is talking about all the training his wife was doing, and how hard she was working, that's funny. He clearly doesn't realise what it actually sounds like his wife is doing when 'training.' Booth and Brennan do. Hodgins and Dr Fuentes also finally get to play with chainsaws, and Cam is unable to find a problem with their logic.

Hodgins is Looking into the Murder of the Lobbyist

Hodgins also approaches Angela with a murder scene. An old one, from the lobbyist murder in "The Pain in the Heart". The one Zack admitted he didn't do in "The Final Chapter: The Hope in the Horror". Hodgins is looking for evidence to prove Zack didn't do it. His first is that there is too much blood at the crime scene; Zack would not have been so messy.

Bones - The Final Chapter: The Flaw in the Saw Trailer